“The Internet is the first thing that humanity has built that humanity doesn’t understand; the largest experiment in anarchy that we have ever had.” ― Eric Schmidt

The idea of a decentralized stateless society in which people interact with purely voluntary ideological and moral transactions exemplifies the internet’s inherent architectural anarchism. Although unpremeditated, the internet is the perfect example of a large scale anarchist organization. There is no hierarchical authority controlling or regulating the internet, members and affiliaties participate voluntarily, information flows freely and individuals join and exit associations at will. Internet means freedom, emancipation and collective openness: “one of the best and most famous examples of the new anarchy is Wikipedia, an online encyclopedia that is also based on the concept of letting anyone wants to share knowledge to contribute. It has become the world’s largest knowledge database with over 1.5 million articles in the English-language edition alone. Everyone can write a Wikipedia article and edit any Wikipedia article yet, despite this anarchistic approach, most Wikipedia articles are of high quality and exactness. Anarchism is not an absence of structure and rules; it is decentral structure and rules enforcement.” [1] Freedom gives us the power and right to act, speak, think and create without restraints.

Why do people want to be “on the Internet?”  One of the main reasons is  simple freedom.   The Internet is a rare example of a true, modern, functional anarchy.  There is no “Internet Inc.”   There are no official censors, no bosses, no board of directors, no stockholders. In principle, any node can speak as a peer to any other node, as long as it obeys the rules of the TCP/IP protocols, which are strictly technical, not social or political. — Bruce Sterling 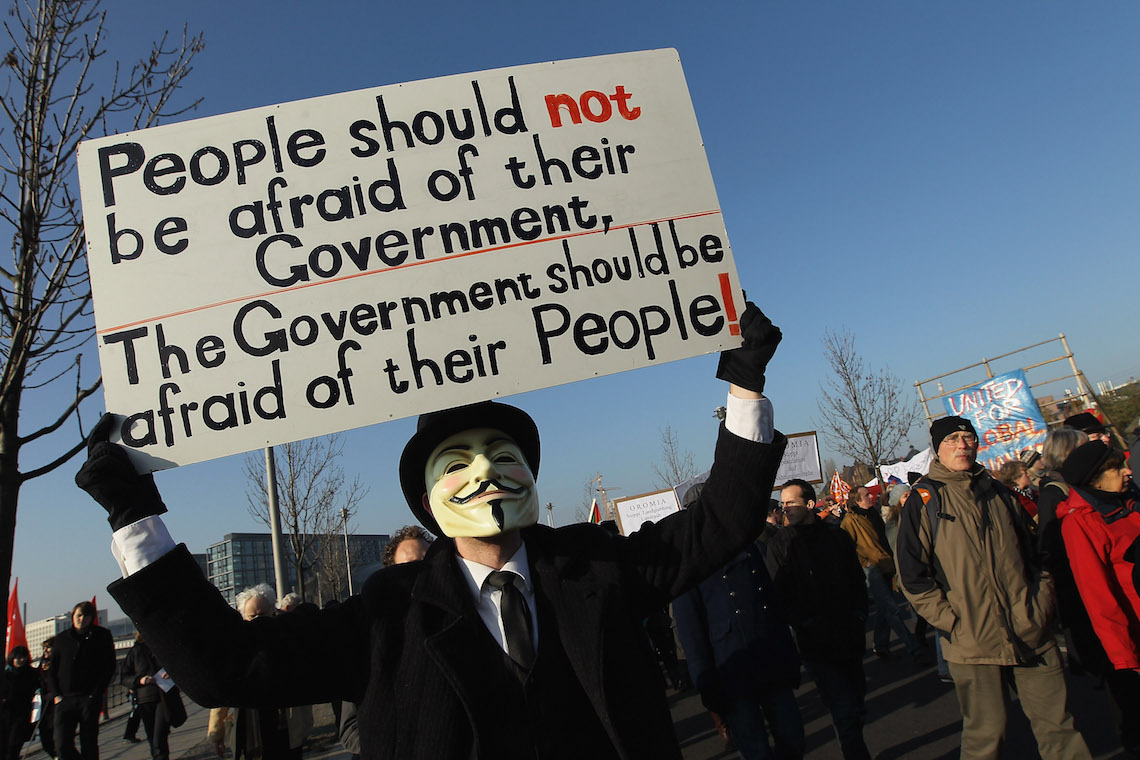 Online, everyone is faceless and known only by a nickname, thus creating both equality and anonymity among individuals. Digital anarchists embrace a principle of anonymity that places inherent limits on hierarchy within the group. They are normally against homophobia, racism and derogatory terminology and believe in some leadership, planning and organizing. Nevertheless, “the Internet cannot be considered an agent of organization, but rather an agent of chaos and anarchism. In fact, Anonymous has taken for its symbol a Guy Fawkes mask, as seen in the graphic novel V for Vendetta and its movie adaptation. The graphic novel centers around the ideas of anarchism, and the use of the Guy Fawkes mask sends the message that members of Anonymous do as well. However, that is all that can be known for sure about the political views of the members of movement. How far they support anarchism, what anarchism means to them, and what actions they are willing to take to further anarchism is impossible to pin down because political opinions are slightly different for every anonymous member”. [2] Anonymous is one of the most visible symptoms of the scope and power of the Internet today, however, political and moral stances are irredeemably individualistic.

From the USENET groups to the darknet to 4chan and other chan-style image boards, toxic technocultures have always thrived in an environment of little accountability, anonymity, and the increased globalization enabled by online technologies (as cited in Massanari, 2015)

No doubt, the Internet as system of resistance can be an extremely useful tool for the right movements and campaigns, specially against despotic regimes. But instant messaging, forums, emails and social networking sites can also bring more complicated problems: “In October 2012, ABC News reported that the video Amanda Todd had posted to YouTube had been viewed more than 17 million times. In the video entitled “My story: Struggling, bullying, suicide, self harm,” the British Columbia teenager uses flash cards to tell about her experiences of being blackmailed and bullied. A little over a month after posting the video on September 7, 2012, Amanda hanged herself in her home on October 10, 2012”. [3] After her death, her Youtube video went viral to the point of reaching more than 17 million views. Sorrowfully, the hate campaign did not stop there; it continued online after Amanda’s passing away. People all over the internet ridiculed her suicide and made fun of the entire story by uttering what they thought it was resonable: she deserved to die. “It is to be remembered, that there are thousands of child predators in online chat rooms who are taking advantage of sweet young boys and girls everyday. This is why Amanda Todd’s story should serve as a wake up call for children everywhere” said Inspector Paulette Friel of the Royal Canadian Mounted Police. [4]

More than cyberbullying and online ravaging, Amanda’s suicide is a direct outcome of the internet’s notorious anonimity which allows people to hide behind their computers while saying and doing whatever they want with little legal consequences and repercussions. On the eve of a menacing digital anarchy, different horrid online movements have already occurred. According to Massanari: “In 2014, a spate of anti-feminist action and harassment highlighted the ongoing problems that women face engaging in online spaces. One event, “The Fappening,” centered on illegally acquired nudes of celebrities (most prominently Jennifer Lawrence) distributed and discussed via anonymous image-board 4chan and Reddit.com. The second, #Gamergate, ostensibly a hashtag “movement” spawned by individuals who purported to be frustrated by a perceived lack of ethics within gaming journalism, became a campaign of systematic harassment of female and minority game developers, journalists, and critics and their allies. Both were emblematic of an ongoing backlash against women, and their use of technology and participation in public life”. [5] Whatever Gamergate was intented to be, it ended up transforming into a dangerous digital culture war. On one side of the spectrum were independent game-makers, both men and women, who advocated for better inclusion in gaming. On the darker side were the misogynists, anti-feminists, anti-establishment supporters, trolls, individuals convinced they have been manipulated by a corrupt liberal press, and conservatives who just did not want their games to change. It was a war between freedom and restriction; between anarchy and order.

Woefully, the war has just begun…

#StopCyberBullying #AntiBullying or Kylie Jenner’s instagram campaign #IamMoreThan, represent some of the efforts e-activists are putting on display in order to fight back; to hold on. Let’s use a new hashtag to oppose tyranny, harassment and intimidation… Because “the strenght and power of despotism, consist wholly in the fear of resistance”…