What has happened after the successful international mobilizations for women’s rights on the International Women’s day (IWD) the 8th of March? While studying the activism on social media platforms of the two main actors of these mobilizations (the Women’s March on Washington and Women’s March Global as well as the International Women’s Strike movement/ Paro Internacional de Mujers) I have noted a certain disparity of actions in different directions. Before the 8th of March these main actors mobilized in the same directions, promoting a global strike and marches for women’s rights and gender equality to take place all over the world. But this network of coordinated actions seems to have been dismantled.

One week ago today, we showed the world that women are leading the resistance. Together we will rise. #DayWithoutAWoman #WomensStrike pic.twitter.com/Nw6UECDso2

To give you some examples. On the one side, Women’s March Global launched its #VoteAgainstHate campaign on the 10th of march  aiming to promote people to protest, both on social media and in public, against the controversial Dutch right-wing populist candidate Geert Wilders in solidarity for a united Netherlands ahead of the upcoming elections. This action is not exactly in the line with the themes for the IWD and the International Women’s Strike, but goes in line with the Women’s March overall guideline principles to eliminate racial injustice and discriminations and promote rights and protect immigrant women, indigenous women and women of color, among other demands. However, one can ask if this shift away from calling upon action to defend women’s rights and her economic importance for society – to protest against a Dutch right-wing populist candidate-  is the most tactical way of mobilizing the movement.

TODAY Women's March Global stands in solidarity with the Netherlands ahead of the controversial Dutch elections. JOIN US! #VoteAgainstHate pic.twitter.com/n90B2dFQ8v

On the other hand, the International Women’s Strike’s global section has not been announcing any new actions worldwide on their social media platforms but instead been sharing pictures and videos from the Marches all over the world. Despite this, the Latin American section ‘Paro Internacional de Mujeres’ using #MujeresEnHuelga hashtag has been very active on social media, especially on Twitter. The focus has mainly been on the terrible event in Guatemala on the 8th of March where 43 girls between 12-17 years where killed in a fire at a Children’s home (Hogar Seguro Virgen de la Assunción)[1]. Many of the girls where orphans and/ or had been sexually abused, staying at the home for protection. The uncertainty about what actually happened and the negligence from the Government, denounced by the civil society, has led to an international pressure on the country to investigate and show evidence about what actually happened[2].  The incident is, as pointed out by the International Women’s Strike movement, another evidence of the lack of protection for women and girl’s rights worldwide.  The Paro Internacional de Mujeres further call the event as an massive ‘femicide’ by the state (as reflected in the tweet below) and demand the Government of Guatemala for justice by using social media and their platforms (mainly Twitter) to disseminate the incident. For instance, on march 13th a Twitter storm was announced using the hashtag #LasNiñasdeGuatemala (The girls of Guatemala) and many people from all over the globe supported the cause by organizing actions outside e.g. the Embassies of Guatemala and posting pictures of the event using the hashtag.

Is the movement dividing it’s actions from a transnational level to more regional events?

Once again this increasing feminist movement is taking advantage of social media to advocate for their causes and engage women all over the world for women’s right. But, the transnational spirit in this movement which could be observed in the beginning when they were advocating in a more united way for the International Women’s Strike / A day Without a Woman has not been visible on social media the last week. I wonder if they are getting farer or closer from becoming a transnational feminist movement? In many ways, it seems they are starting to divide upon each continent. Maybe the needs and calls are too distant from one continent to another? For instance, The Call from Women’s March Global to support its #VoteAgainstHate campaign, could be something less relevant for the feminists in Latin America struggling to end gender violence as a main priority. And the opposite, the Women in America / even more in Europe, could feel the need for supporting the International Women’s Strike’s call to join the cause of the girls in Guatemala, very distant from their struggle for equal pay, and so on. Maybe the successful Women’s March in January 2017 was an incentive to start organize the struggle for women’s rights but now each continent is dealing with the demands of the local feminist movement and struggles for Women’s rights.

Some feminist writers has been criticizing this impossibility of uniting principles for a global feminist movement due to it’s attempt to unify a wide range of issues from reproductive rights, equal pay racial justice and immigrant’s rights but also the “decolonization of Palestine” and the “dismantle of all walls, from prison walls to border walls, from Mexico to Palestine”, as stated by the the more radical platform of International Women’s Strike[3].

These are, according to the feminist writer Emily Shire, who argues in an OP in the NY times “troubling that embracing such a view is considered an essential part of an event that is supposed to unite feminists…why should criticism of Israel be key to feminism in 2017?”[4]

Another feminist writer, who argued for the impossibility of an International Women’s Day for many women pointing out the same difficulties as I did in my previous post, is concerned with the lack of concrete follow up steps of the movement: “Visibility is and will continue to be incredibly important for the women’s rights movement, both in the United States and around the world. But visibility alone isn’t enough. When we rally against systemic, institutional inequality, we need concrete follow-up steps in the form of policy changes.”[5]

It’s difficult to predict what will happen and how this increasing feminist movement(s) will continue to develop – separately, by region or as a transnational feminist network. Maybe, as long as they don’t narrow down the demands to few more common denominators, it will be difficult. But there’s no doubt that however they choose to mobilize, social media activism has been a huge advantage to engage women all over the world.

The posibility of action in the ‘critical periphery’ of social protests

Aiming to follow the read thread I tried to create through all my posts, I will end the discussion by highlighting the key role social media and digital activism can have in supporting this movement, as a global transnational or dividied regional movement/network. First of all, as I discussed previously, for many women – especially in the Global South- faced difficulties to participate in the actions mainly because of her family responsibilities – digital activism is a huge opportunity and gives women (and other marginalized people) a voice and incentive them to actively engage in defending their rights or other issues they concern about[6]. This with the only conditions they have access to internet.

A very interesting article, “The Critical Periphery in the Growth of Social Protests”[7] consider the role of the peripheral online participants, which are the immense majority of users who “surround the small epicenter of protests, representing layers of diminishing online activity around the committed minority.”[8] This could be reflected in the Women’s March and International Women’s Strike movement, I would argue, as  I discussed previously about the possibility ICTs and social media gives to the voiceless, in this case women who are not able to participate in another way than as digital activist. The authors further point out that Social networks are central because “they provide the structure of interdependence that shapes individual decision-making (i.e., whether to join a given protest), and they channel the propagation of activation signals (i.e., how many other people are already participating)”[9]. But, as addressed by the same article, these online activists are many time called as ‘slacktivists’ because of the shallow commitment involved in clicking a forwarding button and the question, asked by them, is if social media help raise awareness of political causes or do they simply encourage “feel-good” politics with hollow consequences?“.

“Generalized discontent is a precondition for social protests to arise, but the ability  to reach, recruit, and organize participants is what allows initial sparks to spread like ‘wildfires’, to use one common analogy  in historical accounts of contentious politics.”[10]

I will continue to argue for the importance of digital activists and its potential to empower women and other collectives with low representation, as I mentioned before, where women’s voices are constrained, the internet has given them an online voice to freely ‘explore contemporary feminism and articulate their own perspectives”[11]. And if it’s in the periphery of an increasing social movement because of family or work responsibilities it can be even more important as the research demonstrates: “relatively low commitment participants–who are often derided as feel-good activists or ‘slacktivists’ –are potentially very important as a collective” because their role is to “amplify the core voices and actions, and thus provide a way for larger numbers of online citizens to be exposed to news and information about the protest…[12].

To reach social change, I believe this new feminist movement(s) needs all the activists they can get to keep on #resisting– both on the streets and online. But as they are a movement mainly by and for women, digital activism can play an even more important role. I hope that by documenting the actions, first by the Women’s March movement and then also including the International Women’s Strike – in these four posts – I have encouraged a further discussion about new feminist movements, both transnational and local, and what role new media and digital activism can play in these contexts. 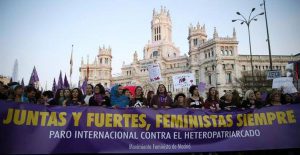 Free translation: Together we are strong, Feminists for ever.

Images from: @Women’s March on Washington and @International Women’s Strike