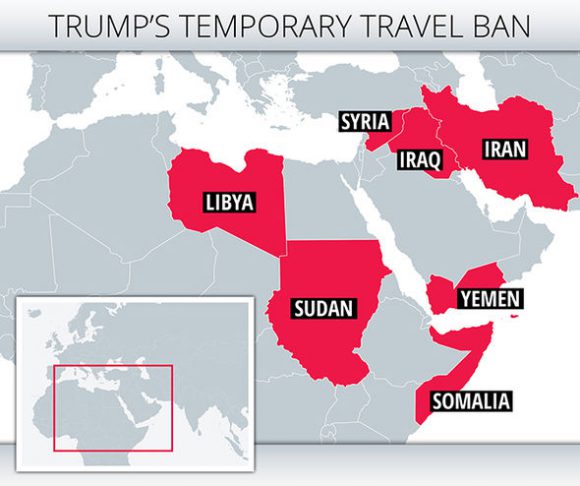 You always see strange things in this world. These strange things maybe coming from normal individuals, or powerful persons from the countries leading the world. A person like President Donald Trump whose words are lawful or have immediate enforcement considering his influence of the world being the most powerful man is an issue of great interest to everybody. It was early January when Donald Trump, the newly elected president of the United States annouced the executive order ban of the citizens from 7 muslim countries to enter into the USA. This was part of his policy towards immigrants in the USA and the newcomers like Syrians fleeing from war, waiting to come to USA are mainly affected. Being an immigrant is not the choice of any body and back to the history every person in the US was an immigrant one time or another. Immigration is a global phenomena we have to acknowledge and it is not usually a negative but a positive contribution of knowledge, skills and cultural enrichment instead.

I was following closely the events taking place in the US and, particularly as a Communication for Development student, interested in the immigration issues particularly the current events in the United States Trump era. It was a hot issue in the social media: facebook, twitter, etc at a global level.

It was not surpirise for those who where closely following his presidential campaign to see the executive order of trump to stop 7 Muslim countries to entering into the US. The seven countries affected by the order as the white house said are: Iran, Iraq, Libya, Somalia, Syria, Sudan and Yemen. Trump, in justification of this order said he is establishing new measures to keep radical Islamic terrorists out of the United States of America. Trump has emphasized saying that (FOSTER) “the seven affected countries were identified by Barack Obama’s administration as “sources of terror”. He continued with poor justification, “To be clear, this is not a Muslim ban, as the media is falsely reporting. This is not about religion — this is about terror and keeping our country safe.” (express.co). He added, (Rosenberg, 2017) “We only want to admit those into our country who will support our country and love deeply our people,” he said.

However, the hard truth is that the people from these countries are not the biggest threat to the US compared for example to Saudi Arabia and other Gulf States which is not in the list but were labelled as actively and materially supporting terrorism “in the 2015 sworn testimony of Zacarias Moussaoui, the so-called 20th 9/11 hijacker, claiming that members of the Saudi royal family had supported Al-Qaeda. As part of a civil case that was brought against the Saudis by the 9/11 families, Moussaoui went as far as naming the specific members of the Saudi royal family who had donated money to the terrorist group in the lead up to 9/11)” (Wight, 2017).

Further more (Horowitz, 2017) “Out of the 19 hijackers of planes used in the September 11, 2011 attacks on the Unites States, 15 came from Saudi Arabia, also the birthplace of al-Qaida founder and attack mastermind Osama bin Laden.” 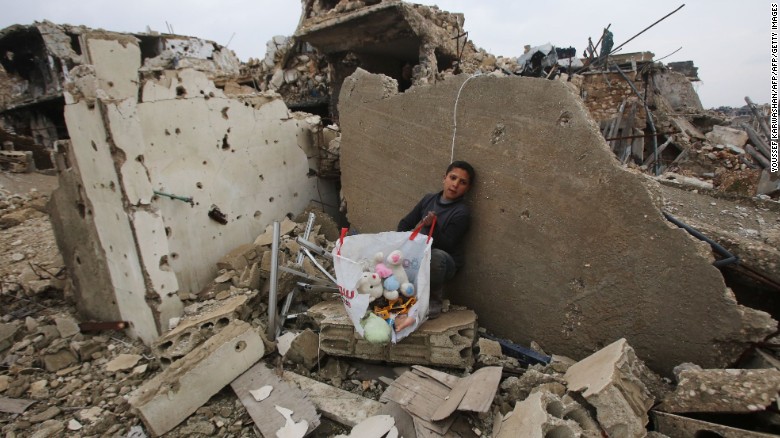 A boy sits with his belongings where his house once stood in Aleppo on December 17, 2016.(http://edition.cnn.com/2017/01/29/politics/trump-travel-ban-countries/)

Furthermore The Guardian writes that the list (Neier, 2017) “does not include Muslim-majority countries where the Trump Organization does business, including Egypt, Saudi Arabia, Turkey and the United Arab Emirates. In financial disclosure forms during the presidential campaign, he listed two companies with dealings in Egypt and eight with business in Saudi Arabia. And in the UAE, the Trump Organization is partnering with a local billionaire to develop two golf courses in Dubai.” So the reason of targeting these poor countries is not clear.

The question is why has Trump selected these poor, least affecting countries while according to the guardian, “In truth, and as most people are only too aware, the real number one terrorist state in the world today is not Iran it is Saudi Arabia, America’s friend, and ally.” (Wight, 2017).

There were positive and negative reactions from various countries and institutions, friend and foes, affected or inaffected.The wonders never end, UAE and Saudi Aarabia which are not in the affected list supported Trump in his policies and strict measures against these countries.

Sheikh Abdullah bin Zayed al-Nahyan, United Arab Emirates foreign minister whose country like neighboring Saudi Arabia is a close ally of Washington said the “Trump travel ban is not anti-Islam, and its is wrong to say that the decision by the new US administration was directed against a particular religion. The United States has made a sovereign decision,” (Trump travel ban not anti-Islam, UAE minister says, 2017)
Iran, though has been long hostile towards the US, it was recently in improving relationship to the USA during President Obama’s tenure, however Mr Trump has branded it “the worst deal ever negotiated”. Iran on its side banned US travellers to her country.

London’s first Muslim mayor Sadiq Khan has argued (FOSTER) that the ban will backfire as a recruiting sergeant for ISIS and other terrorists across the globe. Civil rights groups condemned the measures while UNHCR about the fate of the Syrian refugees quota to the USA.

Will the world be a better or worse place in Trump era? This may partly be depending on how global powers behave. However, as Trump is just in the beginning of his tenure/term there is still a good chance to review his campaign policies toward geopolitical and economic interests. Professor Johan Gultung, (AHMED, 2016)a Nobel Peace Prize-nominated sociologist who predicted the collapse of the Soviet Union, warned that US global power will collapse under the Donald Trump administration but on the other hand he argues that (AHMED, 2016) “there is real opportunity for a revitalization of the American republic.” He says that, “The American republic is characterised by its dynamism, its support for the ideals of freedom and liberty, its productivity and creativity, and its cosmopolitanism toward the ‘other.’ And if Trump manages to apologize deeply to all the groups he has insulted and makes good turn of foreign policy a major revitalization making ‘America Great Again’ may be seen”. (AHMED, 2016)

If these policies are not changed, It may otherwise create hatred and give space to the extremists, racists and fundementalist to justify to enforce the law in their hands.

2 Responses to The Impact of President Trump’s travel ban.