The Rohingya Migration – One Of ‘The Other’ Migration Crises 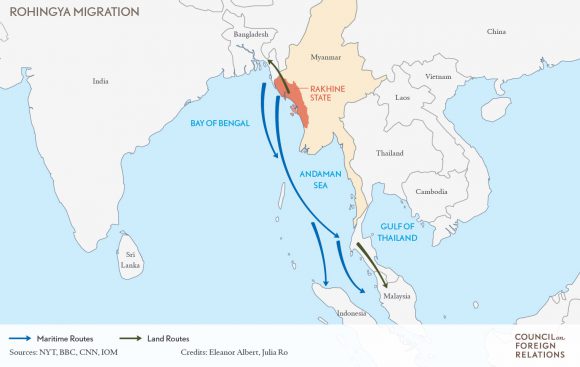 The Council of Foreign Relations

The ongoing migration crises around the world seem to be a never ending story. With the strong picture of a little boy laying on the shore near Bodrum in Turkey in September 2015 the global awareness of the crisis peaked, but since it’s massive exposure in both conventional and social media it seems to have diminished.

The proximity principle is as always strong and the focus on migration tends to be on the ones affecting us directly. One of the migration crises often referred to as ‘one of the other’ is the ongoing flight from Myanmar by tens of thousands of Rohingya. The Rohingya is an ethnic sufi-inflected Sunni-Muslim minority, primarily living in the Rakhine state in western Myanmar and it’s population of approximately one million makes up around a third of the total population of the extremely poor state. The Rohingya has since the 1970’s been subject to pervasive violations of human rights, including persecution, ethnic cleansing and statelessness. With Aung San Suu Kyi’s landslide victory in the Myanmar general election in November 2015 many hoped for a positive change for the country and the Rohingya and former US president Obama lifted the nearly two decade long sanctions against Myanmar. So far only small changes have been seen and with what is still a very fragile government there has been nothing but silence on the treatment of the Rohingya who still faces extreme limitations of their freedom, violence and in parts of the region also severe malnutrition, in what by Human Rights Watch is described as a campaign of arsons, killings and rape. 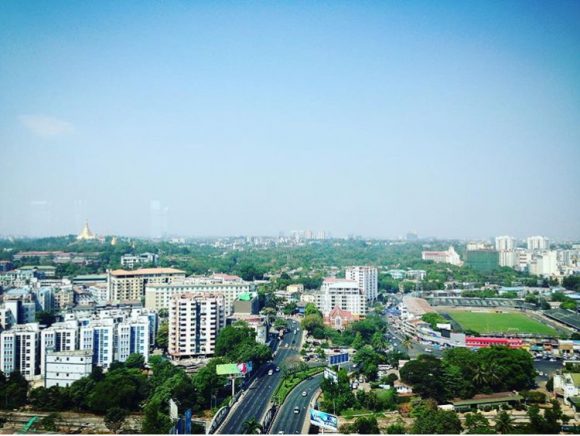 One of my favourite ways of getting information without having to scroll myself to death is through podcasts. The Migrant Crisis Podcast provides in-depth coverage of the migrant crisis, including the causes of migration, the different routes that are taken by migrants, and the responses to migration flows. The three people behind the podcast are Frey Lindsay is an Australian journalist living in London, working at Share Radio, a national finance broadcaster in London, Mike Meehall Wood an Irish/Mancunian journalist based in Berlin who writes for Vice about politics, migration and sports and French German Sophie Pornschlegel who works in Berlin as a public affairs consultant and coordinates programmes and projects for the grassroots think tank Polis180. In the episode from the 30th of January the Myanmar migration crisis is discussed.

The world turned its head towards Myanmar for a short while when thousands of Rohingya fleeing Myanmar were stranded at sea for weeks without food or water in May 2015. People smugglers abandoned their boats at sea when Thai authorities launched a crackdown on human trafficking, and the overcrowded and squalid vessels were turned away by Thailand, Malaysia and Indonesia, in what has been described as a human pingpong. The United Nations counted at least 370 deaths during the crisis, while human rights groups warned that hundreds more may have drowned. During 2016 there were several attacks by a force of Rohingya fighters. The deadly attacks on Border Guard Police on the 9th of October and the escalated violence the following weeks, leading up to the killing of a senior army officer in November shows a new insurgency in the Rakhine state, not seen before. After decades of being oppressed and quietly suffering the situation has gotten to a point where the dissatisfaction and frustration are bubbling under the surface and many fear that the recent attacks are only the beginning. Since October over 60,000 Rohingyas have fled the region, but for most, fleeing isn’t even an option. The main receiving country is Bangladesh, hosting more than 33,000 registered refugees, but numbers as high as 200,000 to 500,000 are being mentioned. The Myanmar  army is blocking any form of press and most humanitarian agencies to enter the region making it extremely hard to get a clear picture of the extent of the crisis.

Award winning photographer and activist Saiful Huq Omi from Bangladesh says that “Myanmar recognizes 135 ethnic groups within its borders. But what about the people who constitute No. 136? They are the non-existent people, those who must not be named.” Saiful Huq Omi documents the lives of Rohingya men, women, and children from Myanmar and in an interview in The Malay Mail Online, an independent online Malaysian newspaper, he said that social media has played a vital role in creating conversations and discussions on the issues faced not just by the Rohingya, but also refugees from all around the world. “Social media is the new media we have to take seriously. It has helped to engage more dialogue than the mainstream media… you can actually have a discussion.”

Through an easier accessible media and an internet, described as Web 2.0 by  Tim O’Reilly, the founder of O’Reilly Media, that has gone from being an information source to a much more participatory tool. (Mandiberg 2012:48) NYU Professor Jay Rosen similarly argues that the former passively receptive audience doesn’t exist in the same way as before and that the audience now takes an active part in the media flow, both by actively choosing the sources and by responding to and spreading it through other media. (2012:80) Through more and new ways of spreading information, like podcasts and the way Huq Omi manages to spread his images through various social media more light will hopefully be shed on crises like the Rohingya migration crisis.