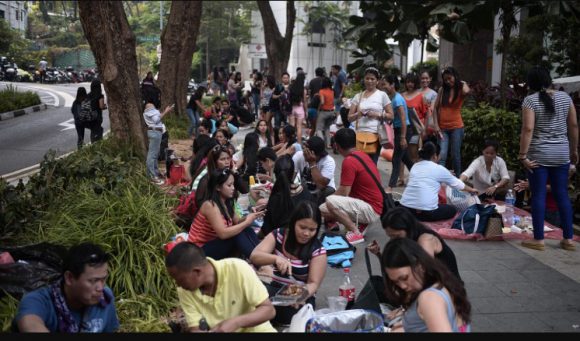 Sunday on Orchard Road, migrant workers spending their day off together

Some time ago a post was circulating Facebook saying something like ‘Imagine if someone from the 50’s showed up today and we picked up our iPhones and said that -Look, we have the most amazing thing. It can fit in our pocket, we can access almost any library and newspaper with it, we can look at the world from above and even see specific buildings, we can call each other when we’re out and about and instead of writing letters, we can send instant messages with it. It’s great and we mainly use it to look at other people’s cats and dinners!’   New media has definitely changed the world and especially the way we communicate, not only on a macro, but mainly on a micro level. Though it might not be completely as first anticipated, we connect and communicate in a completely new way.

Numerous projects have been aiming at providing laptops and internet connection in the developing world. The laptop was supposed to sweep through poor countries, scattering knowledge and connectivity all around, most famously through the OLPC – One Laptop Per Child project. In some places it has been a very successful spread, in others less. What has really been a big change is the spread of mobile phones. There seems to be a belief in the Western world that, somewhat exaggerating, if the developing world just gets connected they will start learning about all the important things we know, they will boost their economies, and democracies will form, looking down on a more humble use of internet and mobilephones. I believe that the truth is that we are all humans and not very different from each other. The same way I mainly use my phone to text my friends about that weird thing that just happened, my husband to ask when he’s coming home, to go on Facebook to keep in touch with old school friends spread over the world, to stare at a stupid youtube clip, relax my brain with some meaningless game, read up on what’s going on in the news or try to find my way to a new place with help of the map, I believe that’s the way most people use their smartphones, regardless of where and how they live. 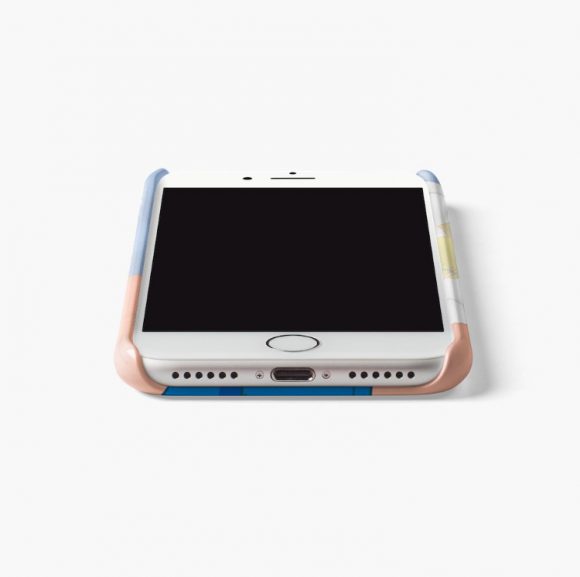 I am very fortunate to be able to call Singapore my home, at least for a couple of years. Singapore is an amazing place, where the summer is eternal, public toilets always clean, the variety of food fabulous and where I without hesitation let my nine year old daughter take a taxi or public bus by herself. Singapore, a city-state with a population of 5.4 million is relying on 557,500 migrant workers for construction work, maintenance and domestic work. 231,500 of the migrant workers are Foreign Domestic Workers, FDWs, with the majority coming from the Philippines, Indonesia and Myanmar.  Singapore is a special place, economically a first world country, topping various lists of quality of life and most desirable places to live, squeezed in between Malaysia and Indonesia and with some of the world’s poorest countries, such as Myanmar and Bangladesh, in its vicinity. The inequality in the region, with the rich Singapore benefitting from cheap labour from surrounding countries, and the home countries of the migrant workers benefitting from and depending on the money the migrant workforce is sending home often makes the workers seen more as bricks in the economic game than human beings. The migrant workers are too often taken for granted, Singapore is used to having easy access to cheap labour and even though there are rather strict laws to guarantee the rights of migrant workers many are being treated in a way that is violating their human rights.

In a study made a couple of years ago, National University of Singapore sociologist Eric C. Thompson shows that “Mobile phones are involved in multiple complex effects that are both social and cultural. They facilitate communication. They are part of a broader discourse, such as print media, through which cultural imaginaries of mobile phones and foreign workers are mutually constituted and contrasted. These are not unique characteristics of mobile phones. They are characteristics of all new and old media.” What has changed though is the accessibility. “Specific characteristics of mobile phones produces unique effects – such as the small size of handphones and silence of text messaging, which are ideal for covert communication among confined domestic workers.” (2009:18)

Today male migrant workers and FDWs are seen with phones in their hands as often as the rest of Singapore. Being far away from your family is hard, living in another family’s home or in a dorm even harder. The smartphones give the migrant workers their own sphere, they can connect with family and friends back home, through text messaging even more delicate issues can be aired without the employer or other people getting involved. 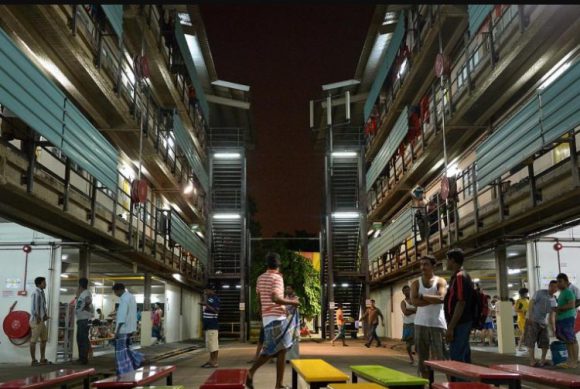 A study made by Aricat and Chib in 2013  the role of acculturation and mobile communication in the adaption of migrant workers in Singapore was investigated. The quantitative results showed that in work spaces migrants’ increased use of mobile communication with members of host society does positively affect their adaption, whereas in social spaces, it does not. Results show that those who communicate with members of host society are better committed to their work, whereas there is no guarantee that those same individuals would be satisfied with their social life in the host country. One of the main findings from the study is that though mobile phones facilitate the communication between migrant workers, and migrant workers and their home countries, it does not help migrant workers to engage with the social life of the host country Singapore.

Sunday on Orchard Road, migrant workers spending their day off together

Mobile phones might not be contributing to acculturation and integration, but I believe that it contributes to some sort of micro form of equality, giving the migrant workers the same possibilities and opportunities to keep in contact with friends and family as the rest of Singapore, as well as having some downtime watching a film from back home, following the news of the country of origin or maybe just playing candy crush.

One Laptop Per Child