There’s An App For Everything – Donations Made Easy 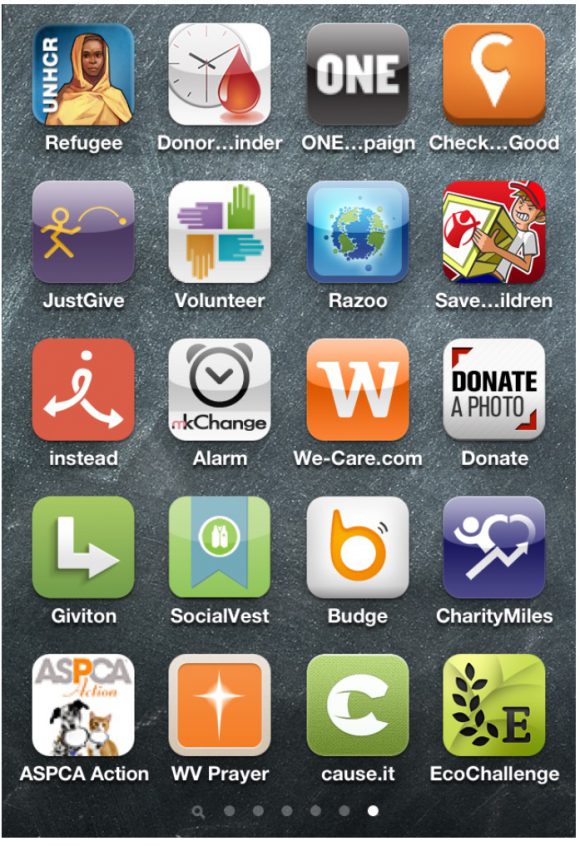 Even though there’s a lot of dark images being presented in media about xenophobia, racism and even neo-nazism there seems to be a rising willingness to help. In several countries, including Sweden, the UK and the US there have been noticeable increases in donations from both companies and private donors. With every catastrophe given extra focus in media the willingness to donate has gotten bigger, with extra boosts around Christmas.

To attract more donors the charities have been working hard to facilitate the giving. Making  donating ‘fun and easy’ as described in an article in Huffington Post, seems to be an important catchphrase.

In her book Global Poverty: Aid, Development and International NGOs Nandita Dogra  looks at how poverty in the poorer Majority World, MW, is presented to the Developed World, DW, and how the audience responds to the messages. By analysing the advertisement of some large and well-known International NGOs such as Oxfam, Plan International, Christian Aid, CARE International UK, Save the Children UK and World Vision, to mention some, she looks at what messages the INGOs are sending out, how the ones in need of aid are portrayed and what poverty looks like in adverts and media campaigns.

The profile of many INGOs is high, they are generally well trusted by the audience in DW and well branded generators and carriers of material and cultural knowledge about global poverty. (Foreword by Cohen, Dogra 2013: xix) Most INGOs have gone through a professionalisation and commercialisation during the last years, competing about customers on the commercial market, which is not least seen in the gift catalogues many INGOs have. There you get a fun filled shopping experience and there the consumers are given the feeling of being legitimate experts on development. They can choose what is best for the MW and it also gives a personal touch, a sense of closeness to the recipients. (2013: 89-91) As one of the informants interviewed in the book expresses it: “ultimately what it rests on is people don’t come to it because they want to end poverty but because they want to buy gifts” (Informant INGO 3, cited in 2013:138) 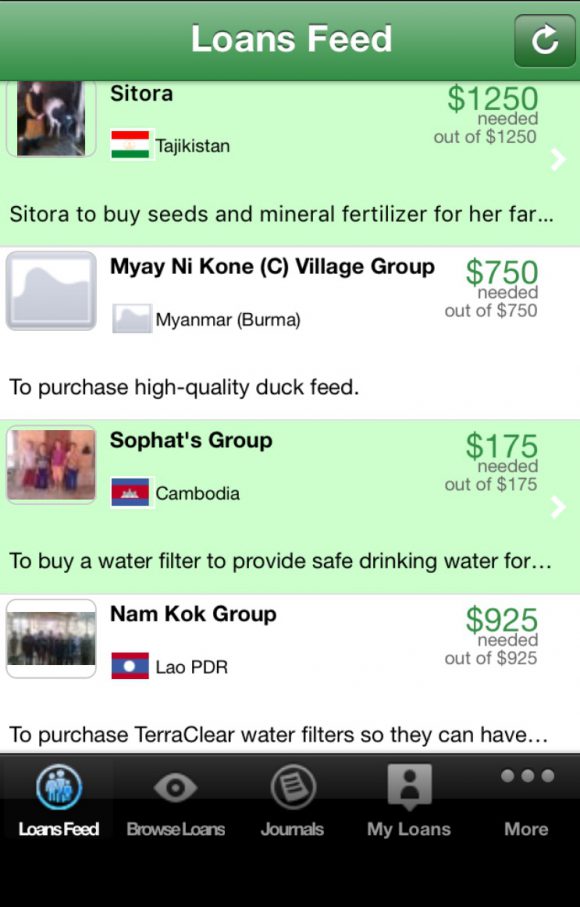 With new terms such as slacktivism and clicktivism, used to describe how people click on a post on social media to like it or share articles or charity drives online without doing anything else, the organisations have to find new ways of engaging people. An article about starving children in South Sudan or about family homes being bombed to gravel in Syria liked and shared 15,000 times won’t really make a difference if all it does is circulating Facebook collecting blue thumbs. The results of a study made in 2016 by researchers from John Hopkins University presented in Sociological Science show that while campaigns spread on the internet easily can draw attention from a large audience, only very few of the people clicking like and sharing actually donate. It actually turned out that the people liking and sharing the most were more likely to delete pledges.

Since giving has to be easy and it apparently is very difficult to spend a few extra clicks on finding a charity suitable for helping the people you just read and cared about in an article shared on Facebook, most NGOs and charity organisations have created smartphone apps. One of the most popular ones is Share the Meal by United Nations World Food Program. The app allows you to feed one child in need with only one tap on the phone. For $0.50 one child gets one meal. UN WFP claims that there are 20 times as many smartphone users as hungry children and if everyone just clicks and gives a little, we can make the world a better place. It’s easy to donate a meal, and it feels almost as there are chefs ready to turn the hob on in all areas battling famine, feeding the next starving kid stating in line. You can see the progress of the program and where the meals are distributed. It’s transparent and easy – easy being one of the keywords – and you get an immediate feeling og having made a difference. As described by Dogra, the donation has a personal touch and gives a sense of closeness to the recipients. 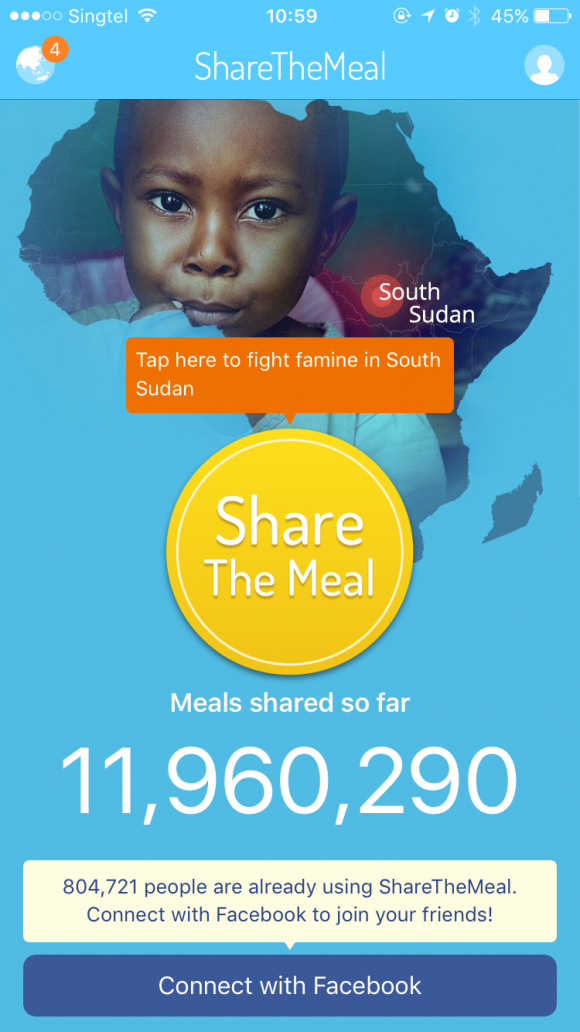 Jellychip is another app created to fill the gap between social networks and charity. It is trying to make donations into a fun and easy game – again fun and easy!! JellyChip allows its users to buy charity gifts for free. As a user you can chat to your friends (earn 5 points), send a snap (earn 5 points), answer surveys (earn 20 points), play trivia (earn 2 points), watch ads (earn 20 points) and invite your friends (earn 100 points). The points can then be spent on buying a charity gift. This app is more about having fun than the WFP app and is probably trying to attract younger donors and has quite a pragmatic feeling to it, with the  focus more on playing games and connecting with friends than the real purpose of the app. 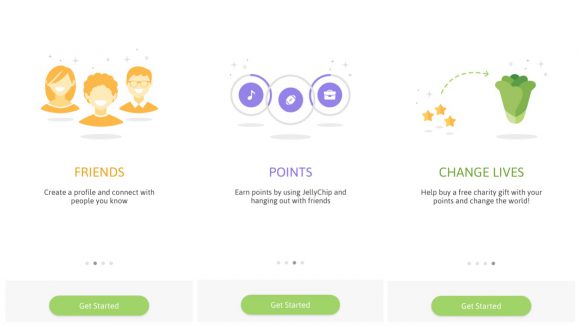 Friends, points and change lives – Giving is so easy with JellyChip!

I believe that uncomplicated and easy is the way to go when trying to attract new donors. Most organisations are depending on donations and as a lot of people on Facebook are more or less slacktivists with active thumbs, apps might be a good way to get more people to donate. Since true altruism seems to be very rare there’s an option in most apps to share that you’ve just done good with your friends on social media, Facebook it, or it didn’t happen! There are tons of apps similar to the ones I’ve described, do you have any donation apps on your smartphone? What are your experiences using them?