The video you just watched clearly mentions key components of big data: the real-time dimension of data, and novel ways of collecting these data. In addition to these elements, a third component has also been underlined by experts: the variety of data formats (Spratt & Baker, 2015, p. 9). This last element refers to the different sources from where data can be gathered.

In the case of preventing the spread of the Swine flu with respect to the 2009 Hajj pilgrimage to Mecca, the video sheds light on the predominant use of mobile phones as ways of collecting and communicating GPS data to the Emergency Operation Center in Mecca. Another notable event during which mobile phones were used to collect crisis data is the 2014 Ebola outbreak in West Africa. On its website, Magpi emphasises how its ‘basic text messaging data collection functionality’ significantly improved Ebola control by helping locate infected people.

However, in crisis situation, mobile phones records are not the only formats of big data. In 2015, Meier published a very interesting book on digital humanitarians in which he details several sources and formats associated with the gathering of mappable data about humanitarian disasters. The author especially mentions mainstream media reports, social media publications such as tweets and facebook updates, SMS reports and satellite and aerial imagery. As underlined by Robert Kirkpatrick, director of UN Global Pulse, the variety of data sources is central to the effectiveness of big data as a development tool (in Taylor & Schroeder, 2015, p. 512). 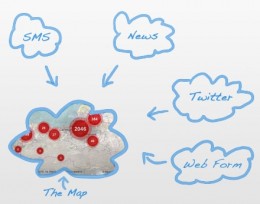 Mapping spatial data: (one of) the most significant application of big data

According to some experts, early warning systems based on the synthesis and analysis of diverse sources of data can be considered the most important potential application of big data from a development perspective (Spratt & Baker, 2015, p. 27). If you are interested to see how such system looks like, click on the link to open a 2013 map from the World Health Organisation representing the disease early warning system in Pakistan. At a more global level, maps representing humanitarian and development issues, such as the world health situation or the armed conflict situation in developing countries, are increasingly developed and made publicly available on the Internet.

In areas such as disease, famine, human security and natural disasters, location is incredibly important. As Spratt and Baker state: “[u]nderstanding better and sooner where risks are building up allows more effective targeting of resources and earlier intervention” (2015, p. 22). In this regard, AidData presents itself as a center that “creates geospatial data and tools enabling development stakeholders to more effectively target, coordinate and evaluate aid”. The increasing use of big data in the field of international development to inform policy and interventions has especially been analysed by Taylor and Schroeder (2015).

Those of you who watched the Tracking disease video at the beginning of this post probably remember that, in 1854, John Snow’s map of cholera outbreak in London affected public policy related to water pumps. They may also recall how Saudi Arabian authorities were involved in the emission and mapping of data in order to respond to an important public health challenge. Outbreaks of rapidly-spreading and lethal diseases like the Swine flu and Ebola are nowadays occurring in a globalised world, where people travel to particular places and cross boundaries. As a result, the treatment of data needs to be local and global at the same time.

Visualisation of spatial big data: to inform or influence policy and interventions?

According to some experts, the processes of mapping and data visualisation have substantial effects on how spaces of intervention are understood. Introduced into the public domain throughout the humanitarian sector, the representation of public health or security data is now available in the form of graphs and maps for public and media use. Similar maps are also used in decision-making processes. However, media and decision-makers are not always familiar with the specific rhetoric stemming from the discursive choices that the visualisation of data takes. This feature can make maps particularly persuasive among less-informed people (Read et al., 2016, p. 10).

This latest idea leads me to introduce, and conclude this post with, the complex relationship between data science and development (Taylor and Schroeder, 2015). In my next posts, I aim to develop further that idea and continue my reflection on social media, spatial data and development by exploring the issues of participation and ‘actionable’ data.

If you have been interested by the ideas developed in that first post, do not hesitate to make comments, add ideas, and open discussions in the dedicated section below.