The short video you just watched illustrates a community mapping project, characteristic example of data emitted under non-profit auspices. It also represents a type of Volunteer Geographic Information (VGI), where data is consciously submitted by people for a particular purpose. The story raises the important issue of participation. Although it has been argued that participatory methods produce more accurate data on the micro-level, participatory approaches such as the one reported in the video are still disconnected with the high-level institutional interest in data science using digital data from LMICs (Low and Middle Income Countries) (Taylor & Schroeder, 2015, pp. 504 & 513).

Besides VGI, ‘consciously volunteered data’ can take other forms such as crowdsourced data collected through dedicated platforms. In this regard, I selected below the last minute of a seven-minute locally produced video entitled Putting Kibera on the Map, which also tells the story of the above-mentioned community mapping project. In addition to the initial digital map, the Map Kibera project later developed a dissemination platform called Voice of Kibera. This SMS reporting platform was designed to encourage people to submit information reports that are then synchronised to the website where the community map is automatically updated.

In emergency situations, Meier underlines that actively requesting information from the disaster-affected population through the use of SMS changed the entire nature of digital humanitarian efforts, which originally went into passively harvesting and collecting public information from social and mainstream media (2015, p. 11). On the digital humanitarians’ website, you can watch the video Digital Humanitarians: Overview of Chapters that refers to Meier’s book. In the first forty-five seconds, an expert from the United Nations specialised agency for information and communication technologies (ITU) argues that, nowadays, people affected by disasters are not just passive recipients of aid but, thanks to hyper-connectivity, they can be considered as creators of content, also able to mobilise communities to advocate for their own interests. Is data technology therefore empowering?

Within the framework of a previous module on C4D (Communication for Development), I have already tackled the issue of participation and empowerment. Empowering processes are often considered distinct from participatory approaches, because empowerment not only requires the involvement of affected people and communities, but also needs to be a goal in itself implemented within a strategy intentionally addressing power inequality (Wilkins, 2014, p. 63). The Geospatial Revolution Project video I shared at the beginning of this post is entitled Mapping power to the people. Several times, the video sheds light both on the importance that people have attached to developing the map and having access to the information themselves, and on the initial scepticism of the community and neighbours towards the mapping project.

Scepticism was essentially concerning the potential information handover to the Kenyan government, in a context where Kibera slum was invisible on maps because it was seen as ‘illegitimate’. Analysing population censuses in African countries, Jerven recalls that counting the population requires in practice a range of discrete decisions about who should be counted, and the categories of belonging may be heavily contested (2013, p. 74). Therefore, people need to be convinced that technology, to which they also need access, could be useful to them and their communities. In the context of crowdsourced data, Martin-Shields argues that ‘it is not enough to crowd-source the information and put it on a digital map, then expect the local population to take initiative and to track down the information and decide what to do with it’. In this regard, the ‘context-specific socio-cultural relationship between people and data technology’ should be examined in order to assess the extent to which data might be empowering (Read et al., 2016, p. 11).

Nevertheless, arguments can be made that data technology is, under certain circumstances, empowering. Data technology can also have an ‘emancipatory’ potential in the humanitarian sector. In the case of the 2015 Nepal earthquake, volunteers from all over the world contributed to the humanitarian street mapping. To experts, it means that the crowd-sourcing of data has the potential to shift the ownership of knowledge, which is no longer the exclusive property of particular UN agencies or INGOs (Read et al., 2016, p. 12). This idea is inherent to Meier’s book on digital humanitarians. However, Meier likes to recall that, beyond technology, the important part is the human story. Regarding the 2010 Haiti earthquake mapping, he states (2015, p. 17):

Every point that was added to those digital maps, every edit that was made, was the result of a human being who took the time to collect and map that information. Every single need that was mapped, every damage report, street corner, IDP camp, etc., was manually and often laboriously added by volunteers who cared.

You can have a look below at a visualisation of the response to the earthquake by the OpenStreetMap (OSM) community, where white flashes indicate edits to the map – generally by tracing satellite/aerial photography.

Human generated mobile data: who is in charge?

Data that are ‘human-generated data’ are emitted or submitted through a variety of sources: 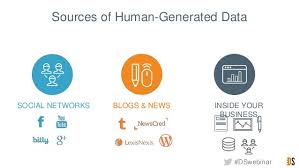 A significant part of mobile data that are gathered in development context, especially in emergency situations, comes from social media. However, the vast majority of the planet’s population does not use social media. In that sense, big data is highly discriminatory (Meier, 2015, p. 27). Even if bridging the ‘digital divide’ has become a keynote of development policy, many features continue to challenge the development potential of ICTs; one of them being that Internet-based ICT development projects have rarely as objective the empowerment of the socially and economically underprivileged groups (Pieterse, 2005).

As Read and her colleagues put it: “[i]f the power of initiative, design, funding and analysis still resides with the tech-savvy individuals and organisations based in the global North, then it is difficult to concur with the view that technology is empowering or liberating”. They further add: “[i]n this view data technology is less than emancipatory – it becomes a system of replication that reinforces existing power holders and reifies technical advances rather than more fundamental ones related to power and agency” (2016, p. 12).

To conclude this post and open the discussion around ethics that I aim to develop in my next post, I am taking another quote from the paper wrote by Read and her colleagues (p. 11):

Thinking about the potential of big data in humanitarianism to contribute towards empowerment requires a discussion of the ethics involved in collecting and analysing data, especially in light of the ‘Do no harm’ humanitarian doctrine.

One thought on “Spatial Big Data, Participation, Empowerment and Agency”