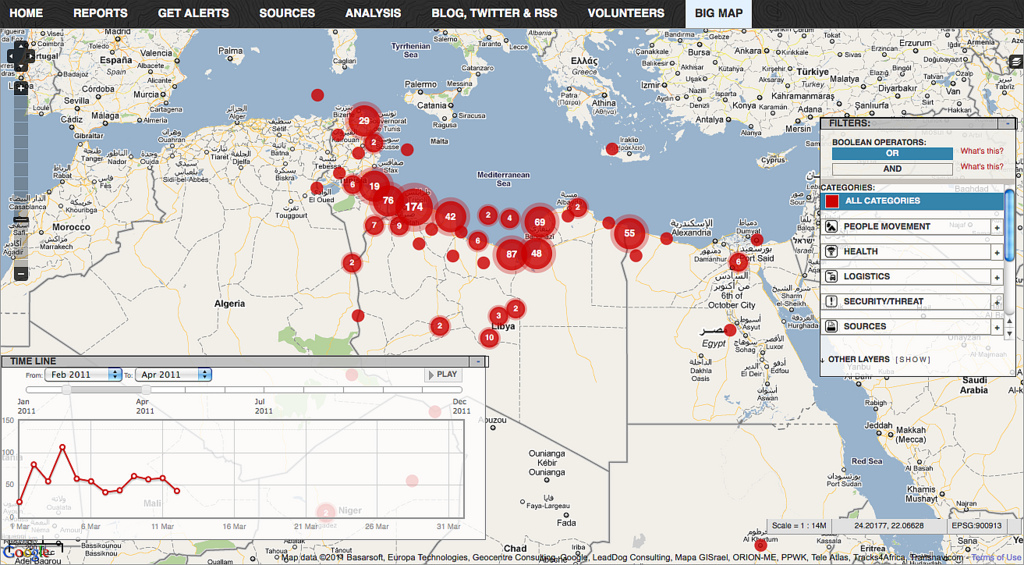 Since the Haiti earthquake in 2010 and the rise of Ushahidi, crisis mapping apps have demonstrated the power which resides in the crowds to make available what we could call ‘life-saving data’. This tools made possible by new ICT developments are, indeed, able to transform humanitarian response strategies into a more collective, participatory relationship between NGO’s and humanitarian agencies, and the public, both local public and foreign, where the latter are no more passive, but active, and global humanitarian actors are dependent on them. But this is, obviously, talking in a perfect world. What is the reality? What are the challenges? What is the future of crisis mapping? I will try to summarize the basics about these questions in these “6 things to know about crisis mapping”:

Unfortunately, this is very unlikely to happen under a neoliberal approach to humanitarian crisis response. But, no doubt, this the highest potential of crisis mapping tools such as MicroMappers or The Missing Maps Project. When locals inform about disaster affected areas, post pictures about it, geotag the exact location of the data, rate the level of destruction, and more so, agencies have a bird’s eye perspective on the crisis. This data configured by location and categories, among other features, gives the chance to coordinate efforts between humanitarian actors according to their capacities and strengths, and having a wider picture of where the aid is urgent, and what kind of aid is needed.

Taking the public into active mode before a crisis situation doesn’t apply only to locals who post data from the field, but also foreign public such as donors that accessing the app can decide to respond with an accurate vision of what is needed and where. That is one of the Ushahidi and MicroMappers creator, Patrick Meier, main purposes with his next project at the QCRI: MatchApp.

This is probably one of the main dangers to crisis mapping and its yet moral and social reasoning that places the value of individuals before the value of collective entities and global politics. It has already happened. On 25th September, 2013, Meier launched MicroMappers one month before the scheduled plan by request of the UN in response to the Pakistan earthquake. This is not to say it was a bad idea to use MicroMappers for the Pakistan humanitarian response, but to reflect the influence global politics can have over crisis mapping technologies. This is how Givoni concludes his article on the issue: “For now, the lesson to be drawn from its introduction of ICTs into global politics is that crisis mapping is too tightly interlocked with the political orderings of a world in a normalized state of crisis to be able to ‘‘change the world one map at a time’’ (Meier, 2012: 100), as its passionate developers would have wished.”

I could number a few of them, but I will mention only the three I consider most important:

Satellite data: It might seem that satellite data is very well identified for most of us, but the global south might not have such thinking. That is the reason why of Missing Maps: “to go where Google doesn’t go”, not because they cannot go, but because it’s simply not interesting enough to go.

Social media: When the Typhoon Pablo devastated the Philippines in 2012, 20.000 tweets were analyzed by the UN in order to create their official crisis map, adopted by OCHA and made public on the official Google Crisis Map of the Philippines. Also, part of MicroMappers structure, for instance, is based on the social media features. It makes sense, then, if relevant changes in social media networks suppose relevant changes in crisis mapping tools. In the end, the people that are ultimately using such tools are used to engage with social media, and frankly, there is no need to go against the crowd’s usage habits of ICT’s.

Internet access: Crisis mapping tools, as so many ICT tools, are engaged to Wi-Fi and internet access. However, there are have been some interesting experiments as it was the Voix des Kivu.

“Make it easy” is also the rule for the good performance of crisis mapping, especially when addressing a public so wide. The “minimization of effort” does not fight with “variability of effort” (Givoni, 2016).

“Following that click will set you on the path to help the United Nation’s important relief efforts . . . So if you’ve got a bit of time on your hands – even 2 minutes goes a long way – then help us make a meaningful difference in the world” (Patrick Meier, in ‘Calling all digital Jedis: Support UN response to super typhoon Ruby!’, iRevolutions blog, 6th December, 2014)

MicroMappers founder’s thinking, who has confident trust in technology to be smart enough to capitalize and organize the huge amount of data that comes through the app, if filters and categories are clear enough to the users. On the opposite side, the founders of Missing Maps (HOT) do not give technology that credit, and put their trust in training sessions and a well established hierarchy where new users are mentored by more expert users.

6.       The debate is open: how to collect data, and actually make the most profit out of it.

This debate is spread over anything related with big data, and certainly is reflected in the theory discourse that surrounds big data and humanitarian response where crisis mapping plays a significant role. In global politics, including development issues, collection of data has been set as a priority before selection of data. This translates into much work in gathering information that will not necessarily have a high percentage of usage, or effective usage.  The general consensus about crisis mapping tools for authors such as Givoni (2016), and Read, Taithe and MacGinty (2016) seems clear: The potentiality of crisis mapping is not being exploited to its fullest, neither is near of doing so.