Anti-nuclear weapons campaigns are not new. Post II World War society also protested against it, especially in the 60’s when the Partial Test Ban Treaty was signed by John F. Kennedy and Nikita Khruschevh in 1963. Organizations like Greenpeace, Friends of the Earth or other groups advocating for a treaty on nuclear disarmament have not been silent eversince.

Last Friday’s (6th, October) announcement of Nobel Prize winner ICAN (International Campaign to Abolish Nuclear Weapons) is due mostly to its success in helping achieve the approval of the UN Treaty on the Prohibition of Nuclear Weapons.  But, why has this civil society coalition succeeded in taking the issue one big step further? The combination of partnerships and ICT (the main theme of this blog) are no doubt one of the reasons.

Partnerships are the modus operandis of ICAN. In fact, even though it was born from a particular initiative in Austarlia and has an international staff team (IST) and an international steering group (ISG), ICAN is formed today by more than a hundred partner organizations. Red Cross is probably its biggest advocate in terms of international actors, but its strategy is not to gather the most partners as much as to gather the most countries represented by a partner, since its campaigns are national based in order to achieve the country’s support of the ban (Bolton and Minor, 390).

ICAN’s dependence on partnerships is more than obvious, but why are these partnerships possible? Surely, ICT helps a little bit.

To begin with, ICT’s make possible their “global days of action”, otherwise it would not be possible to coordinate such civil society events on the same day in many different countries. One of the benefitial factors that have boosted ICAN’s in global politics, noted by researchers as Bolton and Minor, and Clarke, is their success in reaching new audiences and new voices. This has been possible by its powerful discourse, but surely the spread of its message to new audiences, and the inclusion of new voices (survivors, women, representatives from non-nuclear states…) are dependent on ICT. The website launching in April, 2007 was a big milestone for ICAN and nowadays the website is filled with stylish infographics, Youtube videos and photo galleries. Also, hashtags like the #NoNukes or #GoodbyeNukes (Clarke, 1) or #NPT2015 during the 2015 NPT RevCon show the group’s inclusion of social media into its discourse strategy. 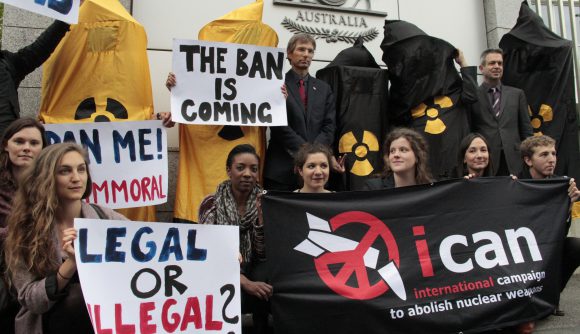 More than that, let us take a look at the Don’t Bank on the Bomb initiative and its “Hall of Shame” report (accessible here), which takes its figures from the bank’s “annual reports, stock exchange filings and other publications of the companies concerned, archives of trade magazines, local newspapers and the financial press as well as specialized financial databases (Thomson ONE, Bloomberg)”. This data is mostly available nowadays thanks to ICT.

Regarding ICAN’s internal structure, it is worth noticing that 4 out of the 7 functions of the IST are directly linked with ICT’s: Maintaining a database of Partner Organisations and recruiting new Partner Organisations; Developing and maintaining email lists and other databases as required; Developing and producing resources such as websites, reports, campaign and outreach materials and news updates across a range of relevant media (including electronic, digital, visual and print); and facilitating effective internal and external communications (ICAN’s “international structure”). E-mails list are indeed the “primary mean of communication” among the partner’s representatives that form the ISG, according to ICAN’s statements, as well as they organize their regular meetings by Internet conference calls.