I must recognize that if I have to choose between a neoliberal development and a post-development approach, I would certainly take the last one as most development theorists do, depending on the definition of post-development we refer among the existing hundreds, though. To apply Western views of development and progress in the Global South to me it just doesn’t feel quite right. I mean… Isn’t there any other way to progress rather than economic growth, capitalism and consumerism? Is it that what we understand as development?

But this post is not about criticizing neoliberals, maybe next time (sorry if I gave you great expectations about that). I was quite surprised at reading the benefits of the Daknet project in the “Drive-By Wi-Fi…” article by Tacchi, Kitner, and Mulenahalli -see below-, clearly a neoliberal-Western approach development project within a Bottom of the Pyramid framework model.

First of all, I must say that I find Daknet a simply gorgeous idea. Simple and with successful results, Daknet was an ICT initiative brought to remote villages in Eastern Orissa state (India) where buses constantly brought wireless internet connection to fix e-shopping stations and shipped the data along their routes down to the city where the ICT centre was placed. In this way, villagers could buy online, send emails, search for jobs, etc. E-shopping was the most used feature and no doubt the intention of the project: to promote consumption habits among marginalized communities in rural India. 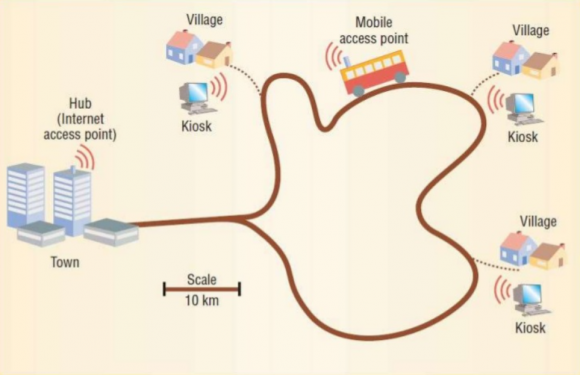 In order to offer products to villagers who would not be able to buy such products otherwise, DakNet developed a catalogue, but this catalogue soon fell short, and non-catalogue items became the most demanded. And here comes the extraordinary thing. Far from turning into a demand-offer gap problem, the issue was solved by external providers and individuals that came into action and provided those products that were not in the catalogue. In this way, villagers from marginalized communities had access to items they were already willing to acquire, but did not have the chance without Daknet, but neither without a participatory model.

This is such an example of ICT4D capability of bridging the digital gap and bringing the opportunities and advantages of new technologies to undeveloped communities. It is also a good example that, despite we in the DevCom field may think consumerism and capitalism “is of the devil”, people in undeveloped communities may also be willing to sell, spend and buy. The fact that these people wanted to obtain so many products out of the DakNet catalogue shows me a previous predisposition from them to enter the game of e-shopping even before the Wi-Fi buses started driving around. We might not like it, but shouldn’t we let them choose if they want to play or not the game of capitalism? In the end, we cannot ignore this is what ICT4D is bringing as well to the Global South.