Home Our journey into C4D Business communication? There must be something more..

Business communication? There must be something more..

From the very start of my academic studies, I felt that something was quite ‘wrong’. If being honest, I, probably, felt that something I was doing was way out of what I really was, ideologically speaking at least. Although I realized the paradox from the very beginning, I kept doing the same mistake repeatedly during the following 12 years of life.

Let me explain. When I was 18 years old and a high-school graduate I felt compelled to answer one particular question: what I would like to be(come) in my life? The answer I gave was: a business manager. Now, after 13 years of recollection, the question itself seems quite ridiculous, and I don’t even want to talk about the answer. Back then, though, both the question and the answer seemed, at least, legitimate, if not definitive.

Therefore, in the last 13 years of my life, I studied Business Administration as an undergraduate, and then Logistics Management and Risk Management as a graduate. For most of the time, I connected my research to business communication on either a technical (means of communication) or a theoretical (as a collaborative initiative) level and became accustomed to the principles of information and communication technologies, marketing, public relations, and corporate social responsibility. In each and every step, I was critical and judgmental of what I was taught.

As a short example, I couldn’t see how the sole purpose of a corporation is to increase the profits of its shareholders as Milton Friedman provocatively argued.

The last straw came on a frozen Tuesday morning a couple of years ago. It was during a corporate social responsibility lecture when I learned about inclusive capitalism, Prahalad’s Bottom of the Pyramid concept and the fortune to be made from the poorest of the poor. 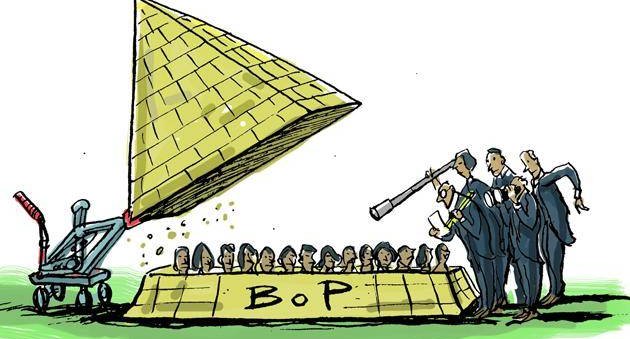 A corporate look at the bottom of the pyramid

All I was hearing from the professors was “profits, profits, consumption, economic growth, fortune, profits”, and all I was imagining were scenes of thugs and pirates from Robert Louis Stevenson’s novel “Treasure Island” fighting for the treasure and pictures of a jubilant Scrooge McDuck diving into a pool of lucky pennies.

I said to myself “Sofo, enough is enough. Not everything is about profits. Communication is not about profits, there must be something more, something different, you need to find it”, and I started searching for alternatives.

The ‘stars aligned’ and my quest for the ‘truth’ coincided with the peak of two crises in my homeland, Greece: the economic crisis and the refugee crisis. Hence, the context led me to articles and material with pure developmental concerns. The truth is that my knowledge about development back then was limited to a mixture of words, concepts, and persons such as aid, fundraising, poverty, the UN, UNICEF, and Bob Geldof. Therefore, it can be said that I didn’t have the slightest clue about what development is, while my knowledge about communication for development was, well, non-existent.

What I saw, heard, and read during that time gave me a general idea about development and of a different form of communication, a form of communication so distant from the typical marketing-led “smiley people in costumes holding hands towards success” (you know exactly what I am talking about).

This experience moved me a step closer to understanding how development is communicated. Consequently, the next move was to search about development academically. What followed? Malmö University and ComDev followed.

At the beginning, I felt overwhelmed, completely lost. Α newbie in a world of experts. But the time was passing and new things were becoming old ones. A year has passed and I can gladly say that I now believe that there is actually a different form of communication where profit is measured as social growth rather than economic gains. I am confident to say that now I have some idea about what communication for development (C4D) is about, but also that it is a field that goes by many names, definitions, and many practice trajectories. C4D is deeply rooted in philosophy, anthropology, sociology, political sciences and many other scientific fields, but also, as Wilkins argues C4D is:

“a process of strategic intervention toward social change, initiated and engaged by organizations and communities [that] incorporate mediated as well as interpersonal channels”.

I have made some steps towards my goal. It’s still the beginning, definitely, yet my journey into ComDev has already begun…