Home Representations of aid work At least we fed the hippos…

At least we fed the hippos… 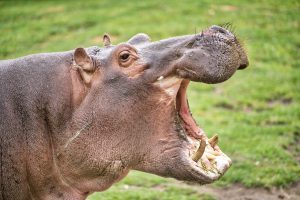 The title of this blog  is one of the memorable quotes from Ernesto Sirolli in his 2012 TED talk ‘Want to help someone? Just shut up and listen’. Without ruining the whole talk for you (which I really recommend you check out), the hippos in question ate a huge field of beautiful Italian tomatoes which Sirolli and his colleagues had overseen the growing of, as part of an agricultural project. They were working in Zambia in the 1970s, full of white saviour complex and, according to Sirolli himself, grateful to themselves for having turned up to save the Africans from starvation. One night their prize crop was decimated by an unexpected hippo herd who ate up the tomatoes and the agriculturalists’ confidence in one (or two) hours of feasting. For Sirolli, this was one of many failed projects, all connected to the top-down, planned, neo-colonial development practised at the time, not just by Italians but across the nascent ‘development industry’.

The description of Sirolli’s talk reads: ‘When most well-intentioned aid workers hear of a problem they think they can fix, they go to work. This, Ernesto Sirolli suggests, is naïve. In this funny and impassioned talk, he proposes that the first step is to listen to the people you’re trying to help, and tap into their own entrepreneurial spirit. His advice on what works will help any entrepreneur.’

His solution? (for every TED talk must glide seamlessly from the problem to ‘the big idea’…) is locally-initiated, locally-led development initiatives where the starting point is listening and supporting, not planning and imposing. Here we see the neo-liberal, small government, entrepreneurial approach to development depicted in opposition to naive large-scale institutional aid.

Put in such stark contrast, who would disagree? No one, I imagine, who doesn’t want to be accused of latent (or actual!) colonial tendencies…And it is here we encounter TED’s greatest strength and its greatest weakness. In 15 minutes it is nigh-on impossible to rehearse both sides of an argument. TED’s strapline is ‘Ideas worth sharing’ not ‘Debates worth spending lots of time working through’. That is less catchy.

But the debate which Sirolli has opened up for his audience is one of the most enduring tensions within development theory. It’s about power and it’s about working out where that power needs to lay in order to see real change. It’s Easterly versus Sachs. It’s micro-finance versus direct budget assistance. It’s the power of the individual versus the power of the state.

On the one hand, I am grateful to Sirolli for his passionate, engaging and easy-to-follow introduction to another way of looking at development and dealing with the ever-present question of why we have not seen more change. Why are so many people still living in slums? Why are safe and clean latrines still out of reach for millions? Why are women still needlessly dying of childbirth? I have these questions and I want a solution too.

But on the other hand, I have sympathy with Thomas Frank who tells us straight that ‘TED talks are lying to you’ in his 2013 Sadler article. Sirolli appears to have an answer to poverty: allow people to be the entrepreneurs they are inside and local solutions will emerge.

This is probably music to many TED conference attendees’ ears. And it is a popular talk, approaching 3 million views and with subtitles available in 35 languages (note that none of them are local languages from the global south but you can watch in Hungarian). And yet the fact that there are thoughtful, dedicated practitioners and academics on either of side of this debate is lost in the skilled presentation of Sirolli’s case; his hippos and his passion and his call to an entrepreneurial revolution.

TED is spreading ideas and I regularly join millions in the wide global audience ready to be stimulated, challenged and entertained by people sharing their visions, their solutions and something of themselves. I am glad that they are doing what they do. But engaging my critical faculties a little more with the underlying affordance of the TED format has reminded me how one-sided a talk can be. I am thinking of introducing a pop-up window which will keep me safe from uncritical consumption each time I click on the side. It will read ‘They will claim it’s simple. It never is.’

And with that, I will leave you. I have some more talks to watch…

Prefer to listen? We have created an audio version of this blog post. Enjoy!

Do you watch TED talks? What do you think their strengths and weaknesses are?