Home ICT4D Is Youtube a space for democratizing ICT4D?

Castell’s (1998) argues that ‘networks of production, power and experience are a direct result of our world in which rapid and pervasive development of information technology. While many other academics such as Boyd and Ellison explore this new form of ‘networked individualism’.

Today there are a number of key social media publishing and communication platforms such as Youtube, Facebook and Twitter that demonstrate how communication for development is taking place in innovative and truly independent ways. Undoubtedly each platform could be examined individually but due to the limitation of this blog I will just focus on Youtube. I am choosing Youtube for the reason that it has “spawned entire new genres that had previously been limited to particular kinds of specialist communities. And of course, Youtube has made possible, a whole new kind of self-branding entrepreneur Fuches (2014).” The reality that there is now a global Youtube generation and a generation of Youtube famous vloggers (video bloggers), commentators and filmmakers is just extraordinary.

Amongst the early starters in the web 2.0 movement, Youtube is unique in that it is just one of a few early sites that offered user-generated content and has grown consistently in its popularity ever since. David Gauntlett (2011) argues that Web 2.0 was best characterised by the ways in which its best known sites enabled previously disparate individuals to “come together to work collaboratively in a shared space. Henry Jenkins coined the term ‘participatory culture’ and believes its growth in recent decades paved the way for how web 2.0 has evolved.”

Shriky (2011) offers an insightful description of how YouTube has come to be what it is today, “as the communications landscape gets denser, more complex, and more participatory, the networked population is gaining greater access to information, more opportunities to engage in public speech, and an enhanced ability to undertake collective action.” An example of how the networked population is participating in disseminating information in this way is from Urbanregor (2011) who blogged “I’m hearing that it’s the wild west in at least two neighborhoods. Killings in a factory outside Abidjan, widespread looting, some of which can be found on Youtube, and many deaths. On the ground reports are hard to come by, and are not making it into mainstream news reports.” While Youtube is a key communication channel offering increasingly democratized information to a global audience, it also hosts a significant amount of material that reinforces the dominant hegemony of globalized culture.

Social media will continue to evolve in the future and undoubtedly new platforms will emerge. Inevitably this means that communication for development will also change and adapt and the future of ICT4D is surely promising. 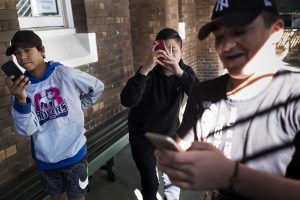 Last month I delivered the first workshop as part of the Photographer-in-residence program at the The John Berne School in Sydney, Australia.
Over the coming months I will be working with a small group of boys as they photograph and prepare for an exhibition that they titled ‘cMore’. Here is a quick snap of them practicing composition on their phones.
Photo: Conor Ashleigh © 2017.