Visually we’ve got a long way to go

When it comes to visual communication there is still a lot of work that needs to be done. In this blog I will explore how in contemporary photojournalism and documentary filmmaking there is still a significant amount of imagery that reinforces traditional power relationships and exotifies those from the majority world.

Edward Martinez is a highly respected documentary filmmaker and in a recent article he unpacked a lot of hard truths too regularly avoided by photographers and filmmakers. “It is this Western tendency to ethnographize the special, the exotic, the different, and to maintain such structures of separation and distance that have fueled a cultural colonialism for centuries”. Martinez asserts that the “history of documentary filmmaking is rooted explicitly in cultural, racial, gender and class-based colonialism. For decades upon decades, Western filmmakers—almost exclusively white men—traveled to other countries and cultures to extract resources (footage), which they would exploit (edit) for the benefit of their home culture (theaters, film festivals, PBS, etc.).” Martinez makes a crucial point that more often than not documentary filmmaking reinforces a flow of power and control over the stories from those without it to those with it.

Robert Godden (2017) notes how “in recent years, the controversy that has preoccupied photojournalism and documentary photography is the manipulation and staging of images, and the success or failure of various attempts to address these issues.” Simultaneously a number of photographers have been exposed for their deeply unethical and, at times, exploitative practices when working with children. Godden (2017) asks “surely respecting the rights of a child forced into prostitution should trump whether an object was removed from a photo through toning?”

In recent years there have been a number of deeply unethical photographers uncovered for potentially criminal practices. While I don’t seek to overlook these issues I do want to explore the issue of publishing photos without consent, something that is more of an everyday example of how photographers demonstrate the cultural colonization Edward Martinez wrote about.

Below is a screenshot from Simon Sharp’s blog Verisimilitude that features a photo of Turkish photojournalist Bülent Kiliç. Bülent Kiliç is a seasoned photographer, he has won a raft of awards including a World Press Photo for his news photos of refugees crossing from Syria into Turkey and is the photographer manager for Agence France-Presse in Turkey.

Kiliç’s photo below ran in the Financial Times with the caption “A Syrian Kurdish woman and her baby on Thursday in the Rojava refugee camp.” Some people may view the photo and read the accompanying caption and feel that Kiliç’s is just doing his job. While I respect the role of journalists and the need for freedom of press, I find the decisions to firstly take this photo, then for it to be filed on to the AFP photo server and then finally chosen by a Financial Times photo editor for publication deeply disturbing. Simon Sharp captures my initial feeling “this is an encounter in which a woman is in the simplest possible way indicating with what power she has left the message ‘please do not photograph me’.” 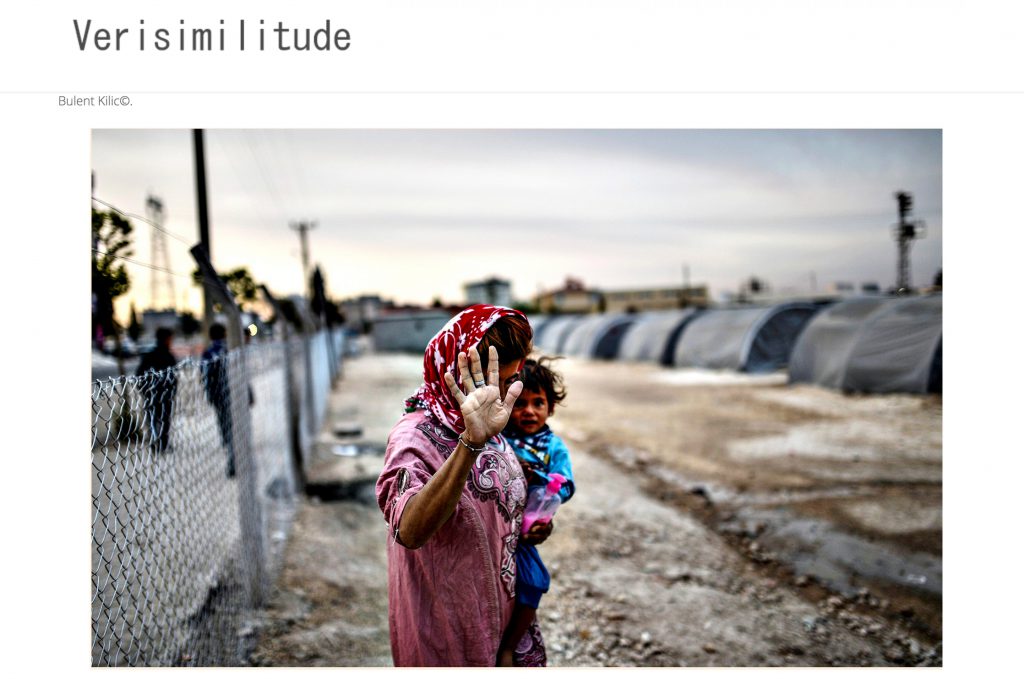 A quick Google search for ‘Syrian refugees’ shows countless images that present ethical questions about consent and also about the deeper power dynamics of representation. I refer to Bülent Kiliç’s work not because it’s unique in this sense but more to represent the deeper issue of cultural colonialism that is yet to be seriously addressed within mainstream visual journalism industries.

This blog isn’t proposing an answer for what is needed to address these deeply embedded issues within mainstream visual journalism. There is no silver bullet nor a single solution but a considered cultural and practical shift may be a good start. As a visual storyteller, this writing has been a valuable step in my own self-reflection. I will close with a question from Edward Martinez that initially prompted me to write a blog post on this topic. “How did I, a filmmaker of color who is obsessed with context, representation and disrupting the status quo, fall into the same trap I constantly rail against?”