10 years in the making, the #metoo movement 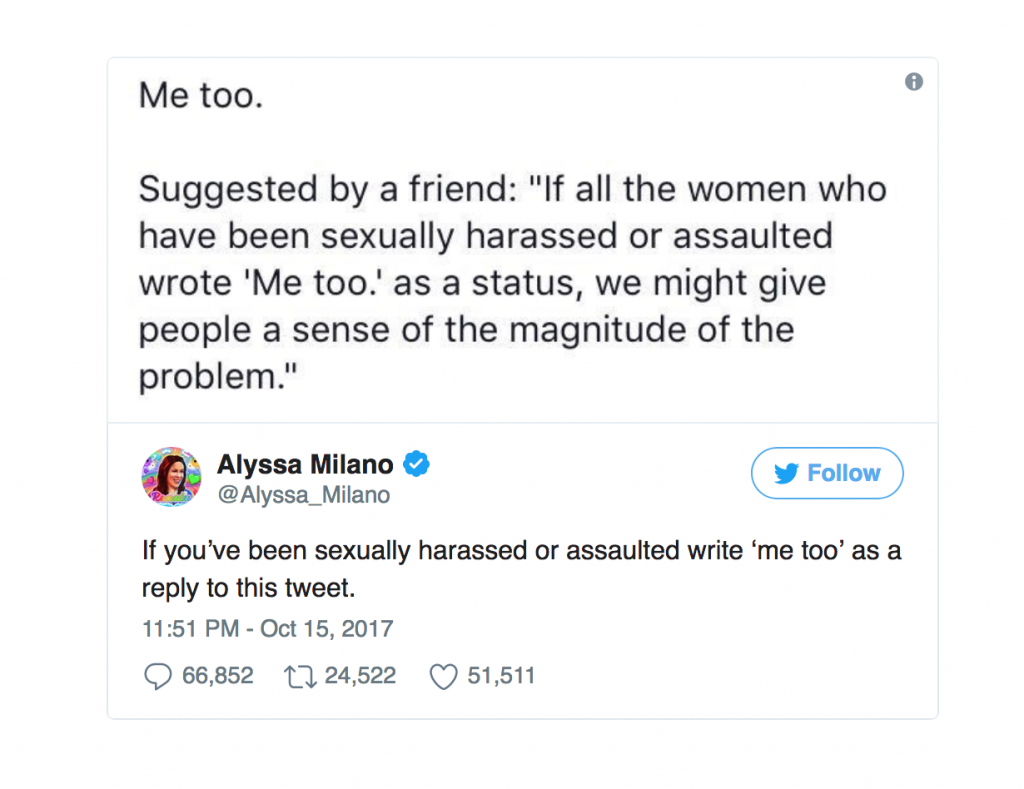 The social media movement that followed across twitter, facebook and instagram saw millions of women share the hashtag #MeToo to express that they too had been victims of sexual abuse and harassment. The #Metoo movement’s popularity is unprecedented in many ways however its history is much longer than most people realise. The #Metoo movement actually started 10 years ago by activist Tarana Burke. Tarana started the movement particularly focused on women of colour and in a statement to the online publication hellogiggles.com she said it was created it to help sexual assault survivors in underprivileged communities. The fact that a social organization not a celebrity is behind the concept of #Metoo highlights the value of such social media initiatives in communication for development as well as more broad digital activism. 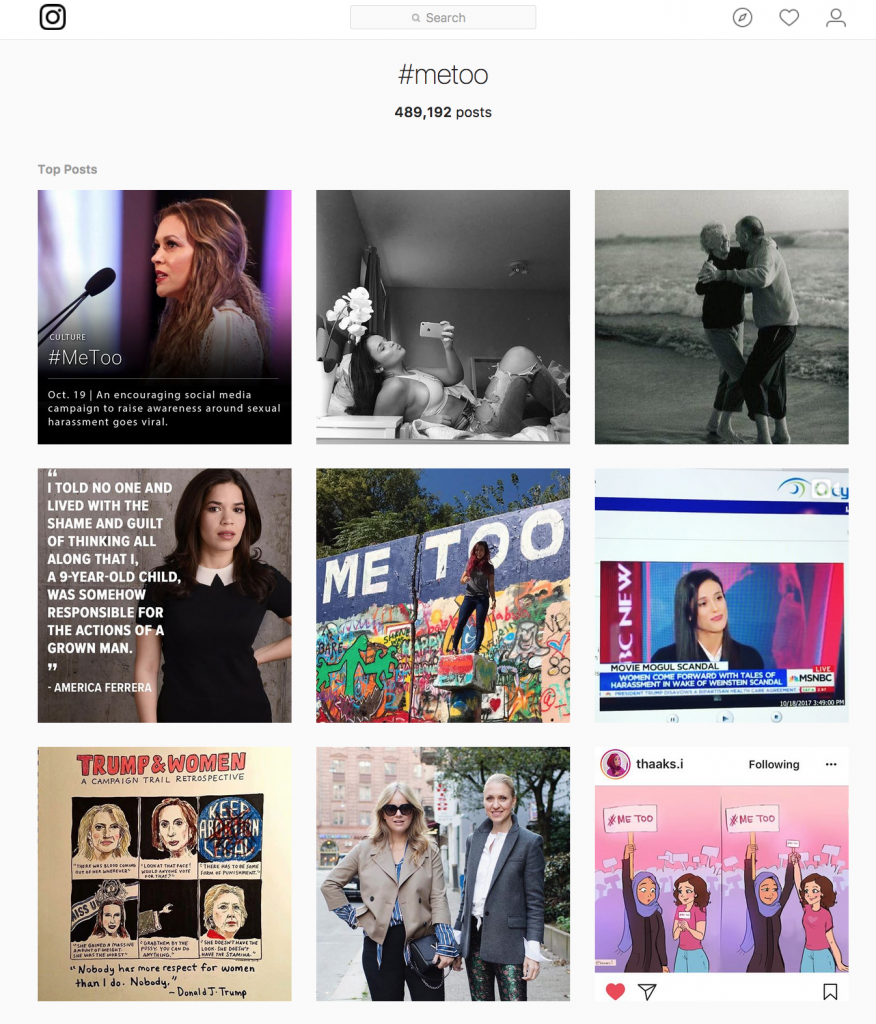 With the insight of the history of the #Metoo movement I have decided to explore individual posts on instagram that may not be among the most popular but are still very powerful. Four days after Alyssa Milano’s tweet on Sunday 15th there have been 489,192 instagram posts using the hashtag. Below is a screenshot of the nine most popular instagram posts that includes a number of posts from prominent women who’ve joined the campaign such as Alyssa Milano, Michelle Desmond and America Ferrera. 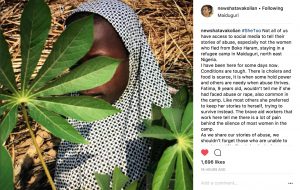 On 18th October 2017 Iranian photographer Newsha Tavakolian uploaded a picture of 9-year-old Fatima living in a refugee camp in Maiduguri, Northern Nigeria. The anonymous portrait is accompanied by a powerful caption in which Newsha reminds viewers of the privilege they have to tell their stories and join the #metoo campaign on social media unlike the women and girls in the refugee camp where she is working. The photo was liked 1696 times in the first 19 hours and it’s easy to see why, Newsha has acknowledged the identity of the girl in her picture but also chose to represent her anonymously. The portrait is incredibly creative and Newsha has used colour, light and form to create a complex and compelling picture. The bright green cassava leaves have a beautiful form and also sensitively obscure Fatima’s identity. The green cassava leaves contrast incredibly well again Fatima’s hijab and a backdrop of warm yellow straw in the background and could be a home. This photo from Newsha Tavakolian is a exceptionally respectful yet empowering image of someone marginalized by the social media nature of the #metoo campaign. 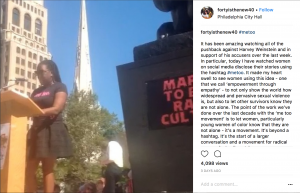 Another instagram post pertinent to this blog is one from Tarana Burke three days ago. In the video Tarana talks passionately from a podium outside Philadelphia city hall. The caption alongside her instagram post says “today I have watched women on social media disclose their stories using the hashtag #metoo. It made my heart swell to see women using this idea – one that we call ‘empowerment through empathy’ – to not only show the world how widespread and pervasive sexual violence is, but also to let other survivors know they are not alone.”“ As the founder of the organization Just Be Inc. who also coined the #metoo campaign a decade ago, Tarana is a perfect example of how an organization can use communicated the social change.

The #metoo campaign has been dynamic across social media this week and it will surely be remembered. While most people will associate it with Harvey Weinstein or actor Alyssa Milano who encouraged people to start using the hashtag the reality is it has a much deeper and much more considered origin, within a social justice organisation working with young minority women in the United States.