#metoo part 1 | The power of sharing your story 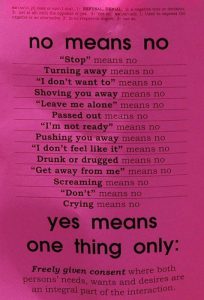 This was the headline in many online news sites in Greece some months ago. Eventually, the news made it to the national television and a public discussion started.

Despite, the power of testimony that a photo holds, not everyone believed her from the very beginning. Not everybody believed her at the very end, either.

Many of them said that the photos were a product of photo manipulation. The worst of them said that she either provoked or entrapped the priest. Even her parents had some reservations in regards to the way she handled it.

She swam against the tide and she reported the harassment to the police, as she rightly argued:

“It will happen to other women, and it has already happened, and if not, these things should be said.”

She was right. It had already happened more than once.

Alternatively, just go on Twitter and take a look at the stories under the hashtag #metoo.

There, thousands of women across the globe share their stories of sexual harassment following Alyssa Milano’s call for openness. They act on the call and ‘exploit’ the social media as means for public deliberation.

Some of them talk publicly for the very first time. Some others are celebrities. Most of them are women living next door. They share their stories, their life-defining stories. They add a piece to the global mosaic of sexual abuse cases globally.

This depository of knowledge enhances a sense of power in numbers. The idea is that “you are not the only, you are not alone”. Talk about your story openly and unite many voices under a joint cause.

This openness also creates a sense of accountability – “I will not be silent anymore”. Therefore, you, the offender, can act on your power (gendered, societal, etc.) but you will face the consequences of your actions publicly.

These are great steps towards facing the problem. Realizing that there is actually a problem is important.  But, is this realization enough for social change to actually happen? Part 2 will shed some light on the matter.

Feel free to share your views in the comments section below and stay tuned for more #metoo posts.