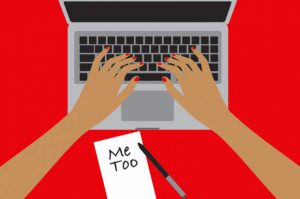 A new hashtag a new movement. The #metoo movement aims at raising awareness on sexual violence against women. The movement has already reached different parts of the world within two weeks.

I was not familiar with the hashtag until a number of my Facebook friends and Instagram followers started sharing their personal experiences followed with #metoo earlier this week. I was surprised by the courage among these women to share their painful experience on social media to friends and to complete strangers. This type of solidarity has somehow shaped a safety net for the victims to share their personal experiences.

I myself, should join the bandwagon and share my #metoo story, however I feel I don’t need to. Just because I’ve been a victim of it doesn’t mean I owe it to the movement. Therefore, I personally feel that sharing my story or experience will only add volume of victimizing myself and other victims. I rather join a movement that holds the perpetrator accountable for their actions.

Having witnessed a number of hashtag movements without much efforts or engagement from the public, has left me somewhat skeptical. I do think it is important to raise awareness of sexual violence, but I don’t believe or think clicking and sharing stories is the effective method to solving the issue.

First of all let’s be a bit critical. Who are the victims in this case, women of course. Does that include all women from different parts of the world? How about the ones in the developing countries, are their stories just as valued as the ones from the Western world? Or is it just more shocking and horrible that a woman in a democratic society has experienced sexual violence? Are we seeking to primarily solving the issue in Western countries or globally?

“Slacktivism is a term that has been described as a willingness to perform a relatively costless, token display of support for a social cause, with an an accompanying lack of willingness to devote significant effort to enact meaningful change’ (Kristofferson et al., 2014, p. 1149).”  Daniel S. Lane & Sonya Dal Cin p.3

While slacktivism in Lane and Dal Cin’s study was referenced when being used by the disengaged youth paradigm, I think there is a grade of slacktivism in this movement. Furthermore, I think It’s too soon to evaluate the participants that are clicking and sharing this hashtag, yet alone to analyze the volume of actual engagement in this issue.

In conclusion, I think that the #metoo movement has reached its goal; by displaying the number of victims that have experienced different forms of sexual violence. The question remains, is this another hashtag that will die out? Or will it have the same amount of audience and attention in a couple years from now?

What are your thoughts on the #metoo movement?