Home Representations of aid work Do it for the gram

Do it for the gram 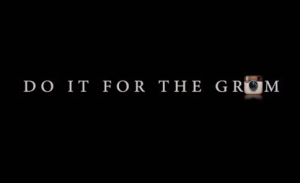 Doing it for the gram is a way of self satisfaction. An activity that fulfills a moment of needing attention, feeling connected to others, but most importantly painting an image of yourself based on what you wish to become or own.

“Do it for the gram” is an urban expression of taking pictures of an illusion that you post on Instagram. The meaning behind it is to portray a picture for your audience to make them believe something that is not entirely true. For example, posting pictures of expensive items such as clothes, cars, a property or pictures from vacations makes your audience believe you are rich.

The same can be said about a number of aid agencies’ representation of their work. We often come across images of heroes and victims when glancing over images on big and small humanitarian organization’s social media or website. A malnourished child or a crying woman is often depicted as a victim while aid workers are depicted as the hero. The hero can be interpreted as the Western world’s extended arm to help the global South.

I will discuss the various roles in my next blog. In this blog I’m interested in viewing the images that are posted on various social media platforms in order to paint the “good” work of the aid agencies.

Michaël Neuman is a director of studies at Crash/ Médecins sans Frontìères. Neuman has written an article called Dying for Humanitarian Ideas; using images and statistics to manufacture humanitarian martyrdom. In this article, Neuman analyses humanitarian imagery and what reaction they might generate

“Most reflections on humanitarian imagery have focused on the image of the victim, notably its use in media campaigns which since the beginning of the 20th century have been designated to generate emotions and hence action or the recurrent depiction of the dominant-dominated/ saviour-victim relationship.” (Neuman) 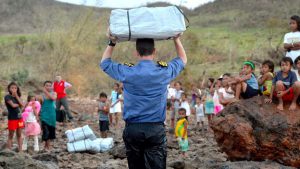 Heroes or an illusion

It’s safe to say that the main goal of the aid agencies is to generate sympathetic emotions that leads to donors making an financial contribution. This can also been seen as a promotion from the agency’s side. Therefore, investing on a picture that will generate emotions and feelings may benefit an aid agency.

In addition, how about the aid workers, are they actually filling up the requirements of being the “heroes” which the images are implying that they are? Or is it just an illusion?

“……the hero figure is a handy invention. Not only does it create consensus, portraying a western world happy to bring relief to the third world, it provides a way of disregarding the political dimensions of a crisis, even a phenomenon as unnatural as the Ethiopian famine in the 1980s. After all, heroes are not fallible; they don’t make mistakes. They are not involved in politics. They save.” Neuman

Neuman shares his perspective of aid workers” role by stating that we the Western world have portrayed these aid workers as heroes because they are willing to make sacrifices most people wouldn’t”. I would also add to this notion by Neuman, that visual images portraying this role by the Western world puts too much emphasis on the idea of this being reality.

Jill Walker Rettberg is a professor of digital culture at the university of Bergen in Norway. Rettberg is a co-writer in a book called Handbook of Social Media, where she discusses the different modes of self-representation in social media.

“Most scholars today, including Hall see representation as constructed. A representation cannot mirror reality because we all have different experiences and interpretations of ‘reality’. Also, words and images and other representations can be interpreted very differently in different contexts or cultures.” Rettberg

Rettberg’s perspective of what reality is varies depending on culture or contexts. Images produces different kind of realities for different kind of audiences. Therefore, I would state that what is often reality is not often perceived that way through imagery. Additionally, the actual presentation of aid workers is not a 360 degree perspective portrayed in images.

What is your take on aid workers ‘actual’ representation through graphics? Would you agree they are doing it for the gram?