My post discusses a variety of social media uses in the context of the ongoing Rohingya crisis: it can be seen as a tool for organizing public support and advocating for humanitarian causes as well as strengthening political leadership or implementing censorship on highly sensitive topics. 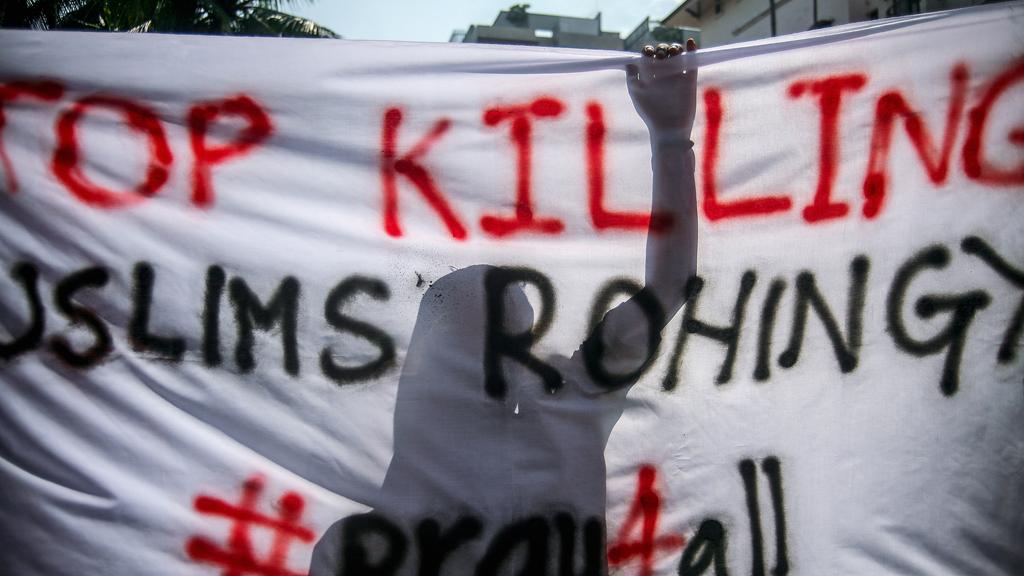 As a Communication for Development student I am shy to admit I was not aware of the severity and extent of the Rohingya refugee crisis until this September when Nobel Laureates urged the UN Security Council to intervene in putting an end to human rights abuses and brutal violence in Myanmar. Furthermore, more than 400 thousand people supported this humanitarian cause by signing an online petition on Change.org. In addition to this, my Facebook friends have massively started customizing their profile pictures with a frame that reads Stop Killing Rohingya Muslims.

There are intensive academic debates around the use of social media as a tool for educating, creating awareness about and engaging in development. On one side, we find a sceptically oriented Evgeny Morozov who speaks about the risks of slacktivism, an action defined  as “feel-good online activism that has zero political or social impact”. Put it differently, online actions merely serve to construct a positive image of ourselves supporting the most trending causes rather than addressing the real problems and producing a desired social change. A simple click or like alleviates us from the necessity to contribute to the cause in more productive ways, and thus saves our appreciate time, efforts and most importantly money.

In contrast to the techno-pessimism, technological utopianism exaggerates the ability of technological advances to bring about a significant change, at a personal and societal level. ‘Extraordinary effects’ of social tools have been praised by Clay Shirky (2008, p. 21) who affirms that ‘we are living in the middle of a remarkable increase in our ability to share, to cooperate with one another, and to take collective action’.

With the ongoing crisis at its peak, at a first glance the overall impression is that little has been achieved since the  outbreak of atrocities in 2015. While Sofia Margareta Møller provides an excellent overview of the Rohingya crisis and its attempts to gain Western media coverage, my aim here is to critically examine the use and power of social media in several initiatives launched by Rohingya activists and their supporters in the West alike, as well as to prepare the ground for further discussion on the role of social media in managing emergency situations.

Let’s start by reversing the chronological order of events. The most recent victory is being celebrated in the UK with the governmental decision to suspend financing and training of Myanmar’s military forces. Since 1991, Burma Campaign UK is considered one of the leading organizations advocating for human rights and democracy in Myanmar. The initiative for an arms embargo against Burma encompassed a variety of activities launched online and off line. In early September, simultaneously with a letter sent by 157 British parliamentarians to Foreign Secretary urging to cancel military cooperation, more than one million signatures were gathered on the Avaaz.org platform online.

Similarly, Germany and Austria are in the spotlight due to strong bilateral military ties with Myanmar. It is complicated to attribute the shift in the British foreign policy only to intense digital activism campaigns – the allocation of £305, 000 for the training of the Burma military forces last year and the potential damage to the UK’s image in the context of the Rohingya genocide for sure have had a deterrent effect on the British public authorities.

In opposition to the Western world that remains silent and passive in the face of the plight of the Rohingya (the attitude better known as ‘being concerned’), the Muslim countries have shown a great act of solidarity organizing in their efforts to denounce the violence in Myanmar. Even Russia took up the Rohingya cause with hundreds of Muslims protesting outside the Myanmar’s embassy in Moscow and holding a multitudinous manifestation in Chechnya.

The rally was organized by a controversial president of the Republic of Chechnya, Ramzan Kadyrov on 4 September 2017. Fiercely criticized for human rights abuses in Chechnya, Kadyrov offered a live video stream on his Instagram account where he addressed the atrocious situation in Burma and expressed his support for the victims. His actions deviate from the Kremlin’s official policy and have generated a substantial amount of critics. With a strong presence on social media Kadyrov seeks to legitimate his regime in the ultra-conservative Chechnya, and second, to position himself as a Muslim leader worldwide.

Finally, I would like to give a real example of how social media can exercise coercive power on humanitarian activists. Facebook, a social networking platform frequently used for spreading social messages and mobilizing popular support for causes, has been put into serious controversy recently when the moderators started deleting any content related to the Arakan Rohingya Salvation Army  (ARSA). The corporation alleges that according to the internal community norms, the Arsa is considered a dangerous organization due to its violent activities. In fact, the Burma government declared the Arsa an extremist terrorist group in August 2017, after the self-proclaimed ‘freedom fighters’ launched a surprise attack on police posts in the region of Rakhine that caused the death of 12 police agents. Created in October 2016, the Arsa militants call their fight legitimate in order to restore the rights of a Rohingya minority group.

While Facebook denies all allegations of ties to the Burma regime, Myanmar’s political and military authorities keep their official pages on the social media platform despite being accused of carrying out ethnic cleansing against the Rohingya. For instance, a presidential spokesman Zaw Htay applaused the ban of pro-Arsa messages and invited his followers to report suspected content to Facebook moderators. 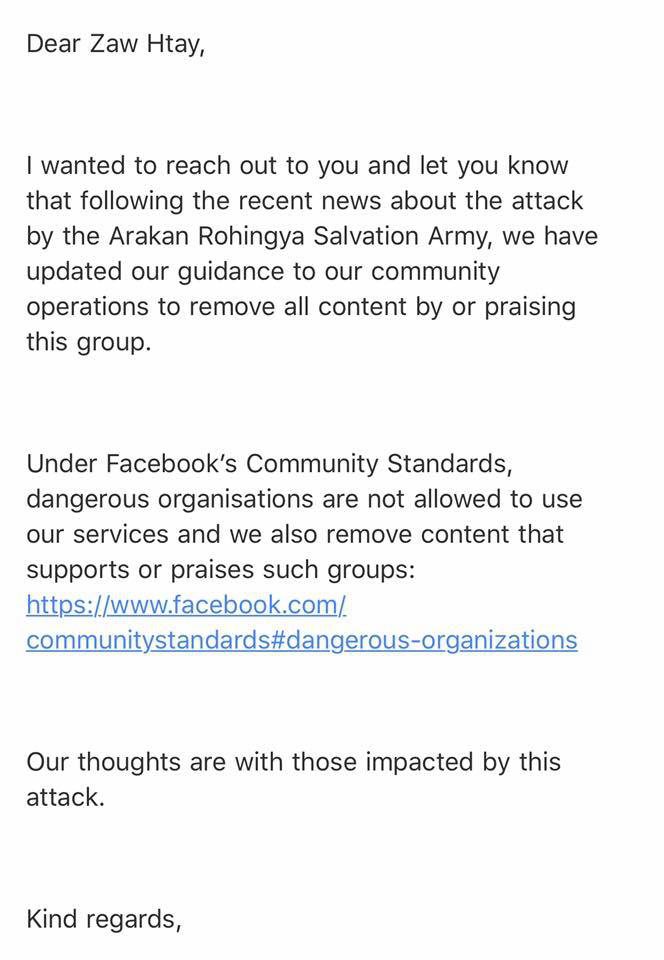 I have very briefly presented different uses of social media in the context of the Rohingya crisis: it can be used as a tool for organizing public support and advocating for humanitarian causes as well as strengthening political leadership or implementing censorship on highly sensitive topics.

Guo and Saxton (2013, p.60) explain why more and more activists move online: ‘Social media’s interactive, decentralized environment offers a low-cost way for organizations to mobilize supporters, foster dialogic interactions with large audiences, and attract attention to issues that might otherwise be ignored by traditional media’. Due to the geographical and cultural distance between Myanmar and the West (the latter still tries to cope with the unexpected inflow of refugees), social media have helped to spread the news and gave visibility to the Rohingya people.

On the other hand, we must be aware of social media risks for militants that go from removing content to state surveillance of committed activists (Gerbaudo, 2012; Mandiberg, 2012). Far from being a neutral area, cyberspace is subjected to the mechanisms of power and control. It is essential to take full advantage of social media opportunities without walking into the lion’s den.

4 thoughts on “Digital solidarity with the Rohingya refugees”