Is our digital engagement in social causes really worth the title of being a real activist? Maybe not always, but one should not underestimate the power of Slacktivism as a powerful tool to raise awareness that can lead to valued self-education. 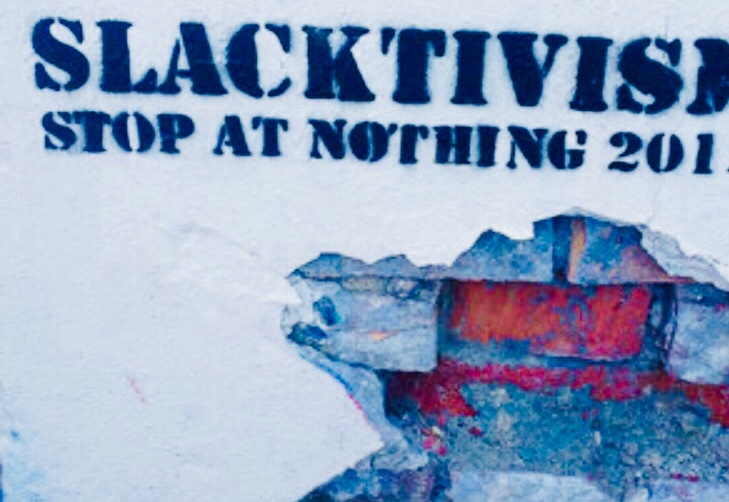 We live in a digital age, where our ability to access information and create content never has been easier. Technology has also expanded our social circles, by our frequent use of social media, where geographically distant people have become our virtual neighbors. One can even say that we have never been so informed and engaged about global issues as of today, if you are assuming the number of likes and comments digital media is generating daily. We are somehow like a digital pool of virtual activists, with our constant sharing, posting and liking of media.

However, it is exactly here the criticism comes in, questioning if our effortless digital engagement really is worth the title of being a real activist, when offline participation is minor or completely lacking. This criticism has particularly been directed towards today’s youth, which are the prime users of technology.

The term slacktivism has been coined to define the expressed willingness to engage in a relatively costless, representation of support for a social cause, accompanied by a lack of readiness to devote significant effort to achieve meaningful change (Kristofferson & White, 2013).

The Sideswipe of Online Activism

As a direct criticism of the trending engagement of slacktivism, as well as part of a smart marketing ploy, the Swedish division of Unicef launched an online advertising  campaign in 2013 called “Likes Don’t Save Lives”. The campaign highlights the absurdness of people’s so called blind faith in likes, to raise money for vaccines, urging people that hitting the like button is not enough effort in  order to cause real change.

One cannot argue against Unicef that donations or volunteering are more useful than accumulated likes on social media platforms when it comes to the mission of vaccinating children, but one should not neglect the fact that digital activism takes on various forms with various missions.

Some digital activist campaigns are simply having the objective to raise awareness of issues that leads to valued self-education, where online participation is more effective and efficient than offline participation.

The Virtue Lies in The Message

The power lies in the ability to absorb and to perpetuate information, which is an undertaking that digital media many times is best suited for. It is noted that a piece of media that is shared publicly not only provides expressed support, but also underlines a specific point of view for others to explore and analyze (Lane & Dal, 2017).

The Black Lives Matter Campaign, which is raising awareness of the systematic and targeted demise of black lives, in the cause to affirm Black people’s valued contributions to our society, is one example where likes and sharing of the campaign’s messages can work as a tool to self-educate the public to bring the central issue of racism in to the spot-light. Although the campaign is depending on volunteers and donations, spreading the message of this campaign has real impact, and works to raise awareness of the issue of racism, while at the same time motivates people to resist injustice.

One should also not neglect the fact that the larger the group who is engaged in a cause, the more attention will be brought to the issue, which can help to amplify offline participants visibility. By this, it is unjust to totally neglect the act of liking, sharing, and composing of online messages, by calling it a lack of real effort that leads to any meaningful change.

Instead, the greatest constraint of online activism is not that people are lacking offline participation, but the potential spread of misinformation, which can mislead the public.

Knowingly, new media is offering unique opportunities for expression and communication, especially among activists, who have found it to be a modest tool to challenge the offerings of mainstream popular culture (Lievrouw, 2011). The downside of new media’s accessibility for creating and sharing messages, is that is done in an uncontrollable fashion, which can lead to the spread of information that might not be properly researched, and by that leading to deception.

In the end it comes down to the fact that the impact of slacktivism as a catalyst for change is not as easily measured as donations and volunteering, which leaves the conclusion of its impact open for assumptions.

Kristofferson, K., & White, K. P. (2013, 11 06). The Nature of Slacktivism: How the Social Observability of an Initial Act of Token Support Affects Subsequent Prosocial Action. Retrieved from Journal of Consumer Research.