On April 10, 2015, thousands of holographic projections marched in front of the Spanish Parliament building in the world’s first ever virtual protest. This innovative and spectacular display of civil discontent captured the attention of thousands across the world, and shone a new light on the political landscape in Spain. 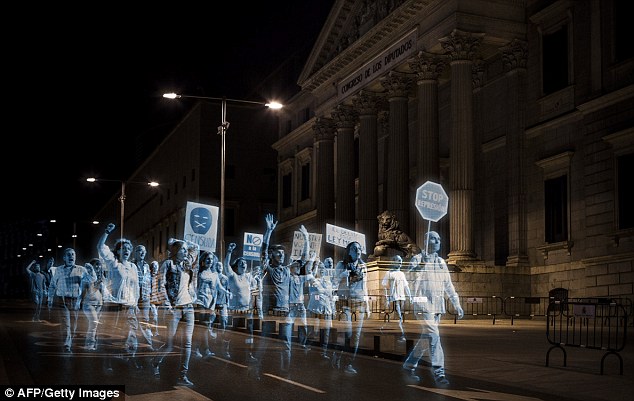 The protest – organized by No Somos Delito (‘We are not a crime’) – was a direct response to the government’s new Citizen Security Law, better known in Spain as Ley Mordaza or “Gag Law”. Following the sustained anti-austerity demonstrations that began in spring 2011, the new law sought to crush public protest outside government buildings by imposing fines of up to €60,000 and even prison sentences.

Despite these oppressive measures, No Somos Delito gained access to Congress’s now privatized ‘public space’ by obtaining a permit for a ‘film shoot’. On the day of the protest, NSD set up a large transparent screen and black hologram booth outside the parliament building. The holographic protest – filmed four days prior in the nearby town of Paracuellos del Jarama – was played on the transparent screen on loop, along with a pre-recorded audio track. Around 18,000 people contributed to the protest by leaving their hologram, a written message (which were used on hologram protest banners), or an audio ‘shout’ on the Holograms for Freedom website. The booth was used by NSD members and journalists to record live hologram media interviews.

This symbolic demonstration aimed to “send a message to Spain’s citizens that soon the only way to protest freely will be as holograms” (Teti & Fominaya, 2015). As NSD organizer Alba Villanueva explained:

“In this case, technology was a channel or tool to get the message across to that part of society that was alien to these issues. Novelty and spectacular action were keys to attract the interest of the media, and generate curiosity about something new or creative while conveying the message” (2015, cited in López, 2016, p.10).

Ironically, the inability of protesters to physically gather outside parliament likely worked in NSD’s favour in terms of generating public awareness around the new Gag Law. In the years leading up to the hologram protest, millions of Spaniards participated in over 87,000 protests across the country as part of the Indignados (outraged) movement. As these protests were routinized, naturally they lost some of their news value and surprise effect (Kriesi, 2016, p.72). The innovative use of technology in the hologram protest thus caught the attention of international media and put the issue of Spanish democratic oppression back on the agenda.