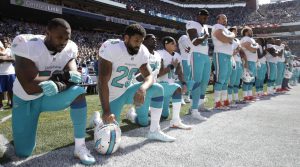 In the United States, players in the National Football League (NFL) have been protesting against racial discrimination and police brutality by kneeling while the National anthem is being sang. President Donald Trump Twitter tirade on some of the players had elevated the issue to a matter of national debate and controversy. The act of kneeling in protest against racial injustice was first used by quarterbacks Colin Kaepernick in August 2016 and Ttrump’s tirade had now turned it into a movement.

The president had waded into the issue at a political event in September when he bemoaned what he saw as a decline in the sport and criticised the players who refused to stand. According to him, the sport was an issue that could unite the people across America and any player who continued to take part in the act was ‘a son of a bitch’ (Los Angeles Times 2017/09/24).

In a confrontational stand against the president’s vituperation, more players have continued to sit out the duration while the National flag was flying, and the national anthem was being sang. In two national polls conducted by Fox and CNN news outlets, 55% and 49% of respondents respectively sided with the president saying that the players are doing the wrong thing. The players however argue that just like other people in other disciplines who use their platforms to voice their opinions, they do not see anything wrong in what they are doing but simply airing their stand regarding an issue that is dear to their heart and simply using the platform of their sport to do the same.

After the initial Trump involvement in September, many of the players like the president had taken to their digital social media Twitter and Facebook accounts to criticise the president for trying to create a division among players and  within the sport in the country. The players had employed their super stardom status and numerous online networks and followers to bring the issue to their fans and as many as possible have in turn contribute back using the same medium and turning the issue to a national debate.

Digital online networks allow for bottom up politics and participation that do not rely on hierarchical organizations or institutionalized channels such as political parties; that are far from being horizontal, they form heterogenous structures where some nodes are better connected than others (Bailon 2014). It is this unequal connectivity that allows online social networks to be more efficient in the spread of information and the reason in this instance that the president’s Tweets on the issue and the players networks and followers are a short distance or a few links away from each other.

The write up endeavour to underscore why digital networks; formed by people communicating with people, help forms of social and political engagement emerge and be sustained through bottom up. Online Networks the paper maintains help people self-organize because they activate a number of mechanisms that rely on the connectivity of the network. Networks are so important because they make individual actions and decisions interdependent, diffusing information about previous behaviour that will affect subsequent decisions and actions. One could denote this pattern in the NFL, Trump brawl in that the president had himself reacted to the continued kneeling of players in solidarity with their course by further tweeting ‘If NFL fans refuse to go to games until players stop disrespecting our flag & country, you will see change take place fast. Fire or suspend!’. The Tweet in turn had generated further reaction via twitter and Facebook posts of fans and supporters of NFL stars and the controversy rages on. Digital Media networks may thus be credited here with helping to spread critical messages, organize and cultivate collective identities, build counterhegemonic spaces, forge connections and increase civic engagement and participation (Dencik L et, al. 2015:20) and in the end creating a level playing field that provide a much more egalitarian and balanced ability for all to contribute to national discursion.