As defined in a previous article by Feinleib, Big Data is the ability to capture, store, and analyze vast amounts of human and machine data, and then make predictions from it. On the other hand, Beyer and Laney, in their definition of Big Data, stress that it useful for an enhanced insight and decision-making.

Indeed, stocking large amounts of information is not useful by itself, but the main goal, in this case, is the way to use and combine this stock of data to facilitate decision making. For example, financial markets increasingly rely on Big Data to trace stock prices and refine predictions for computer-based trading. From a development perspective, Big Data can be useful to follow the development of projects and better understand the needs and expectations of beneficiaries.

Still, when thinking of Big Data, large SQL or Excel tables or algorithms for instance usually come to our minds. Although these two tools require a certain expertise to have the ability to “read between the lines,” they remain incomprehensible for the ordinary person. In his book “The Promise and Peril of Big Data,” David Bollier explains that Big Data usually rely on powerful algorithms that can detect patterns, trends, and correlations over various time horizons in the data, but also on advanced visualization techniques as “sense-making tools”.

In this sense, it is equally important to present eye-catching visualizations of the results extracted from Big Data. They will firstly contribute to making a large amount of information understandable and accessible, in addition to the dissemination of the findings through academic publications, reports, presentations, and social media. In his book “Data Visualization with JavaScript”, Stephen A. Thomas defines Data Visualization as the way to visualize large amounts of data in a format that is easily understood by viewers. The simpler and more straightforward presentation, the more likely the viewer will understand the message.

Indeed, Data Visualization is an important feature of Big Data analytics, as it can provide new perspectives on findings that would otherwise be difficult to grasp. For example, “word clouds”, which are a set of words that have appeared in a certain body of text – such as blogs, news articles or speeches, for example – are a simple and common example of the use of visualization, or “information design,” to unearth trends and convey information contained in a dataset, but there exist many alternatives to word clouds, such as geographic representation.

For instance, the infographic here below, based on large amounts of information, explains how mobile technology is used worldwide as a tool to improve health care, education, public safety, entrepreneurship, or the environment. These worldwide initiatives are part of the 9th Sustainable Development Goal (SDG), which aims to “Build resilient infrastructure, promote inclusive and sustainable industrialization, and foster innovation.” 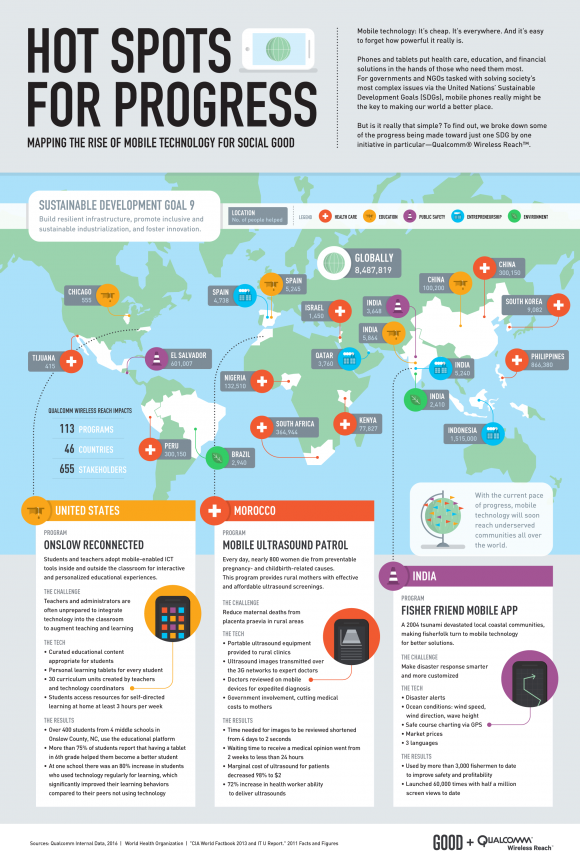 In this example, Big Data is doubly useful as it is the base of projects launched in the various countries represented on the map. Concretely, it contributes to reducing maternal deaths from placenta praevia in Moroccan rural areas. Furthermore, the simple visualization of this large volume of information facilitates its analysis and can consequently help decision makers to track the progress of projects and can be used as benchmark data to reproduce the same successful initiatives in other countries.

Geographic representation of Big Data is used in the various field, especially in monitoring migration movements. In this sense, almost 200 academic studies involving big data and migration had been published between 2007 and 2016. The Syrian refugees’ crisis is a significant example of the use of Big Data to visualize migration flows. The infographic here below from the New York Time explains in a clear way how nearly half of Syria’s entire population was displaced due to the civil war. 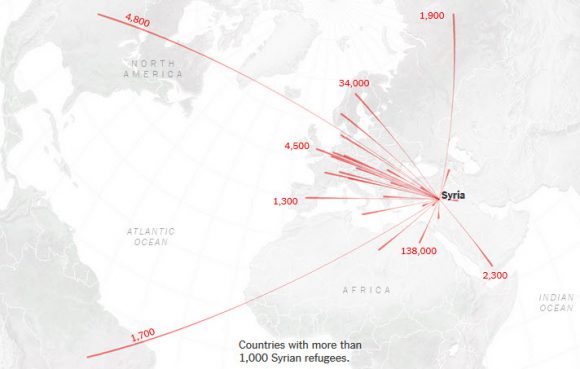 In a wider context, the geographic representation of migration flows between 2000 and 2016 based on Big Data gathered by the UN Refugee Agency (UNHCR) summarizes in a clear and synthetic way the countries of origins and of residence/asylum of migrants.

These are two examples of how geographic visualization of Big Data can – through the historical track record – predict more accurately how many more refugees could be expected over coming years into which points of entry. As a result, military, police, and humanitarian efforts be more coordinated and pre-emptive based on this information.

It is important to take into consideration that stocking large amounts of information is not useful by itself, but its main goal is to use and combine this stock of data to facilitate decision making and create added value. The analysis of Big Data is a big asset as it might facilitate tracking the progress of projects, understand migration trends or allow a better-coordinated mapping of conflict or adversity and delivery of aid to people in dire circumstances.

However, we must remember that Big Data also enable strategies of surveillance, control, and population management. Big Data involves the quantification, classification, and construction of individuals and populations, and categories that are never impartial or objective but embedded in socio-political contexts. It is the researcher’s ethical role to keep these crucial points in mind when deciding what data to use, how to get it, treat it, store it, and share it. In the UK for instance, the manipulation of data and statistics has played a major role in bolstering anti-immigration narratives and xenophobic political agendas. This is to say that raw Big Data or visualized one are not themselves harmful, but the way they are used is indeed dangerous.

This entry was posted on Tuesday, October 10th, 2017 at 7:44 pm and is filed under blog. You can follow any comments to this entry through the RSS 2.0 feed. Both comments and pings are currently closed.