Imagine being an ambulance driver and you get a call to assist someone who’s had a heart attack. You get the address, but it’s not one you know. What do you do? Try to find it by typing the address into Google maps, for example. But Google maps is telling you it doesn’t exist. You get this as the result: 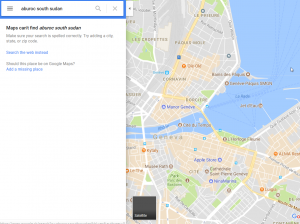 But you know it exists. What’s an ambulance driver to do?

Same situation, but you’re an aid worker and there’s a big disease outbreak. You and your colleagues need to go door-to-door advising people of how to take precautions to prevent disease and watch for disease symptoms to seek treatment. In rural South Sudan, for example, Google Street View hasn’t quite made it down there. And Google maps is unreliable. It’s not showing houses, or roads, or even entire towns on the map. But they exist.

This was a problem a number of NGOs were discovering in their aid work, and it was proving a hindrance. Lives were in danger, or even being lost, as aid workers didn’t know where their house or their town was exactly located when they responded to outbreaks of disease or natural disasters.

Missing Maps was established by a number of NGOs, including the British and American Red Cross, and Médecins Sans Frontières, to properly map areas using satellite data. Here’s a short vid explaining the project:

Essential to new mapping techniques are imaging technologies, in particular satellite data, the increasing use of which ‘is radically reshaping the ways different groups comprehend space and place.” (Roisin Read, 2015)

It’s because of Google maps, and the thousands of satellites floating around in space, that we have the essential data available to map these places.

It’s vital work, enabled by not only satellites orbiting above the earth, but also development in digital communications, and social media. Yet some scholars may doubt this, as digital humanitarianism is seen by some “to be driven by what is possible rather than what is needed, to the extent that, as Trevor Barnes noted with regard to the data revolution in geography: ‘computational techniques and the avalanche of numbers become ends in themselves, disconnected from what is important’.” (Roisin Read, 2015) I disagree with this assertion. Data is knowledge, and data knowledge in aid work enables a lot of the work and development being done today.

The social media aspect behind Missing Maps is interesting and bears some thought. First, groups of people come together in ‘mapathons’, to use data to map areas together. Often mapathons are promoted in advance on social media, or in fact during it:

Is it possible to classify young people engaging in Missing Maps as ‘Slacktivism’? Some had noted that Slacktivism is used to describe “

Some journalists have adopted the label ‘Slacktivism’ or ‘Clicktivism’ to describe “contemporary forms of youth engagement arguing that online social action satisfies youths’ moral and psychological needs for engagement, thereby excusing them from participating in traditional offline forms of engagement”. (Daniel Lane, 2017)

Missing Maps, it could be argued, meets the description of online youth and social action satisfies moral and psychological needs for engagement. However, I’m not convinced that it is actually a case of letting youth off the hook in terms of offline forms of engagement, because Mapping in itself is not “‘easy’ and tokenistic, but in fact entail[s] a great deal of social investment” (Daniel Lane, 2017), and thereby doesn’t ‘inhibit’ meaningful social action and engagement, as it is such in itself.