Posted on October 6, 2017 by Derek Stubenbord

As a group the focus of our blog has been based on the Sustainable Development Goals (SDGs) and the impact of social media and data thereupon.  Like their predecessor, the Millennium Development Goals (MDGs), the SDGs have set high expectations upon the world governments and the development community as a whole.  With these lofty goals the question then remains what percentage of these can in fact be reasonably attained.

As analysing the entirety of the MDGs and SDGs would constitute a massive undertaking, this post will draw parallels between MDG Goal 1 Target 1C (Halve, between 1990 and 2015, the proportion of people who suffer from hunger) and SDG Goal 2: Zero Hunger.

According to the MDG Report released in July 2015, Target 1C to halve the proportion of people who suffer from hunger was almost accomplished.  Looking at figure A, we can see that the percentage of those suffering from hunger went down from 23.3% in 1990-92 to 12.9% in 2014-2016.  Despite the promising results, the report was aware of growing refugee and conflict issues at the conclusion of its report yet indicated that eradicating poverty and hunger remained at the core of the post-2015 development agenda. 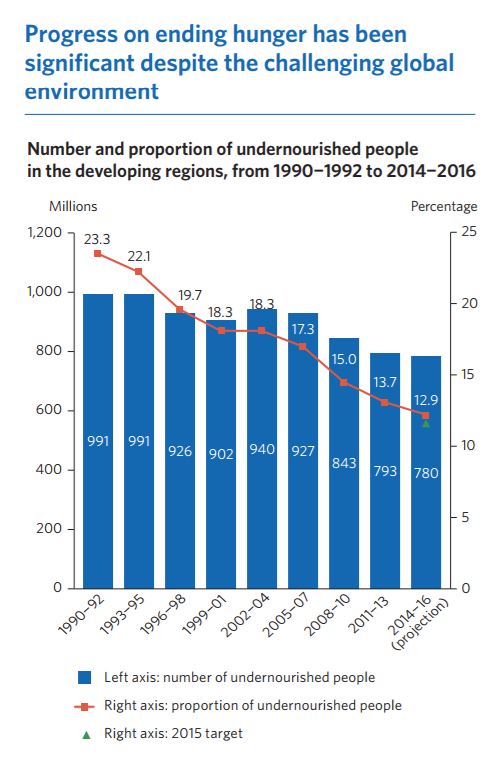 In direct contrast to the progress made during the period of the MDGs, the number of hungry people in the world has increased for the first time since 2000, according to The State of Food Security and Nutrition in the World report released by five UN agencies (FAO, IFAD, UNICEF, WFP and WHO) released last month. According to the report, which is the first UN global assessment of food security and nutrition following the adoption of the SDGs, the percentage of undernourished went from 10.6% in 2015 to 11% in 2016 (see figure B).  While this proportion may not seem very large, it is significant in that it has increased at all, particularly when we look back to the MDG figures which showed a steady decrease. 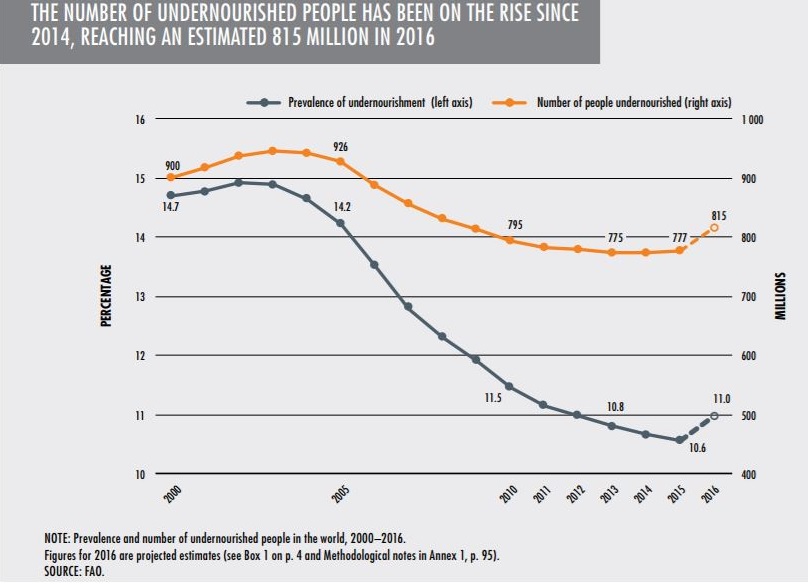 This alarming rise has been attributed to a greater number of conflicts, often aggravated by climate-related shocks. Over the past year, hunger has reached extreme levels in many parts of the world, famine was declared in South Sudan in February, and Northeast Nigeria and Somalia are considered on the brink. The increase in world hunger also brings into question whether the SDG target of zero percent hunger is even attainable.

Cindy Holleman, a senior economist at the Food and Agriculture Organisation, stated “whether it has been a blip and it’s going to go back down again, we’re not sure, but we’re sending warning signals. We are sending a message that something is going on.” (McVeigh, 2017).

Whether the data indicates a blip or not, it must be seen as a call to action to world leaders and development institutions to increase their efforts if the SDGs are to be reached.  At the moment we are seeing increases in world hunger but the causes, conflict and climate change may further impact various SDG as time continues on.