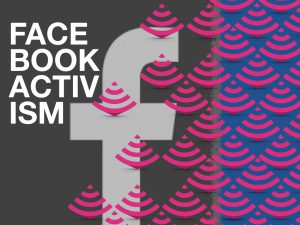 Facebook has us all hoodwinked! Listen here you digital activists, slacktivists and one-percenters – isn’t it time to make a volte-face on this nonsense and take a look at the bigger picture?!

I have a problem with Facebook activism. On the one hand it provides the possibility to spread messages of social change to millions of people, in a way that revolutionary leaders of the past might only have dreamed of. Yet on the other, if activists are trying to speak truth to power and redistribute it in ways that favour their agendas, how can Facebook, as a huge corporation that turns a quarterly profit of $4.26bn be an appropriate weapon of choice? It is a giant of capitalism and makes its profits from mediating human relationships in a way that homogenises our digital selves and, as is becoming increasingly evident, threatens our physical and mental health too.  It is time for social media activists to think more broadly about their campaigns and move beyond the allure of online publicity as an endpoint. As Rebecca Teich notes in this great blog post:

“…ironically, Facebook does harm to the social causes offline that we champion online. Why? Social media platforms transform social issues into cultural capital: issues become labels of political alignment and lend an appearance of social awareness attached to a digitally curated self. They become a means to the end of social gain, rather than of social change.”

So it seems I’m not the only one out there that sees the hypocrisy in this uneasy relationship.

Before I unpack this further, it’d be wrong to dismiss Facebook, and social media in general, as inappropriate tools for activism and social change. After all, the contribution of social media in mobilising the masses during the Arab Spring is well documented. And Facebook has proven its worth in mobilising volunteers in emergencies too. But Facebook fixes such as mobilising volunteers in the aftermath of a crisis tend to be short term, following a pattern that runs something like:

What follows, is typically an uphill battle. Buoyed by their heroic efforts in actually mobilising real life humans, the activist now starts seeing their digital comrades scurrying away and avoiding their calls at the first mention of ‘check out this video of a dog saying the word sausages’. Come on Winston Smith, I can see you’ve read my message at 17:01 this afternoon and its now almost 19:00! #WTF man?!

But this is no laughing matter. Tragic events that see an initial outpouring of public support after a digital callout online soon fall by the wayside, often before justice is served. The community campaign Grenfell Speaks following the Grenfell tower fire in London is a stark reminder of this, where the community activists are still fighting for justice.

One thing to remember is that media, including the social variety, are not politically neutral to begin with. ‘Communication itself…’ writes Beltran ‘…is so subdued to the influence of the prevailing organisational arrangements of society that it can hardly be expected to act independently as a main contributor to profound and widespread social transformations’.

Whilst research in media studies shows that audiences play an active role in negotiating the meaning of the content they consume, we should ask ourselves how much influence Facebook, Google and their holy algorithms have in generating crowd-sourced meanings of social media content. Are these meanings to be kept within the echo chambers of the digital micro-communities we are pigeon-holed into? If so, how can social media activism allow us to speak truth to power rather than speak truth to the powerless? Adam Curtis has a thing or two to say about this in his great film ‘Hypernormalisation’ – brought to you, in full, by YouTube (I know… don’t get me started.. this is entering the realm of hypocrisy 2.0)!

So what is Facebook going to do next to clampdown on grassroots activism?

The response to my ‘clickbait’ title is probably that it’ll do nothing. Or at least won’t do anything drastic anytime soon. It already has a huge percentage of the market share and its corporate authority neatly protected through allowing those with axes to grind, to grind away within their own echo chambers. Oh and you better believe it – the axe-grinding activists get the shitty end of the algorithm stick. Facebook doesn’t work for activists like it does for businesses. For activists, Facebook is like the auntie who, ever since you asked her why she puts her teeth in a jar at night, smothers your big sister with the latest gadgets from Apple and leaves you with an out of date blackberry (blackberry with a small ‘b’… if you’re lucky!).

Fear not digital comrades! There are a couple of ways forward.

First up, take a look at alternative social media sites for activists such as these 5 online tools for activists, by activists. Will some of these platforms enable you to reach your target audience or achieve your campaign goal? If so, perhaps operating outside the mainstream social media platforms will help you to not only think big but act big on your mission and be the change you wish to see in the world.

Rebecca Teich’s call is bang on, its time ‘to think more critically about the way information is exchanged and portrayed and to redirect activism in a direction that remains truer to its cause.’

Drawing on the fields of psychology, media, and development studies, I argue in my next blog post that regardless of the platforms we choose, the way we communicate our messages is of critical importance. We need to move beyond presenting our target audiences with the hard facts and then expecting them to take rational decisions as a result (we tried this with climate change and it didn’t work). Instead, we need to think more about values. This might sound a bit vague now – but I’ll clear it up next week, drawing on the great work of Tom Crompton and co. at Common Cause Foundation.

Footloose communications and participatory media practitioner trying to put down some roots and a proper job in Geneva, with mixed results.
View all posts by J J →