The El Niño Phenomenon is a periodic weather pattern that occurs with a frequency of 10-20 years. The surface temperature of the Pacific Ocean around the equator rises which usually increases precipitations in Colombia, Ecuador and Peru.  In March 2017, a particularly strong El Niño-episode caused extreme rainfall and floods in Peru and Ecuador. What role did ICT, if any, play in the relief efforts following in the aftermath of the humanitarian disaster that followed?

¡Huaico! ¡Huaico! words the ecoed through the streets of the colonial town in Northern Peru in March 2017. Huaico is a qechua-word (The most commonly spoken native language of Peru) which describes a phenomenon that is common in the Andes during rainy seasons.

It is used to describe how when the downfall is particularly heavy flashfloods will rush down the mountain sides at high speeds and drag anything it finds in its way with it. If it happens to come across populations (villages, houses, towns, roads), tragedy is the usual outcome.

In the following days, 7 Huaicos hit the coastal town of Trujillo. Its proximity to the Andes made the town particularly exposed – localities like Otuzco or Santiago de Chuco (above 2000 m.a.s.l) are only an hour or so away by car.

As rain fall intensified in March 2017, an inactive river bed near the city known as Quebrada San Ildefonso became active and filled with water.

Then, despite efforts from the Red Cross, local authorities and civil defence units, the levee broke. Water poured rapidly into the city and flooded large parts of the city.

This continued for several days. I covered the situation in Trujillo back in March 2017 and could witness first hand the damage and some of the scarcity that followed. 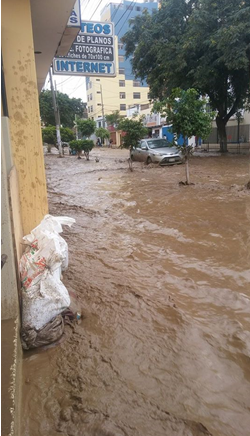 A Disaster That Grew By The Hour

Similar floods occurred in virtually all of the coastal Peru and parts of the highland and Amazon Basin. It was one of the absolutely worst flooding in the Peruvian history; leaving more than hundred people dead and hundreds of thousands directly affected.

Bridges and other essential infrastructure was severely damaged and many places (including Trujillo) were at times completely isolated from the rest of the country.

An air bridge was established by the Peruvian air force to supply the city and evacuate vulnerable populations.

The main canal that supplied the city with fresh water was damaged by another Huaico and the water supply in the homes of Trujillo was heavily restricted.

Often trucks had to deliver fresh water to residents as the supply was none or very close to none. The flood water left streets hazardous to human health; garbage, filth and even human skulls (parts of an old pre-Colombian cemetery had been flooded) were laying all around in the thick layers of mud that covered the streets of Trujillo.

Supermarket were emptied out of bottled water supplies in a few days across town.

A Tragedy In Images

Devastation was nation wide following the El Niño-episode that hit Peru in March 2017. Infrastructure, private businesses, human lives were all severely affected in many places. More than 100 people lost their lives and hundreds of thousand were affected.

As the rainfall continued throughout March, the flooding affected more and more regions.  In many places, bridges and other key infrastructure were literally swept away by the water masses and whole populations become cut off from the rest of the country. 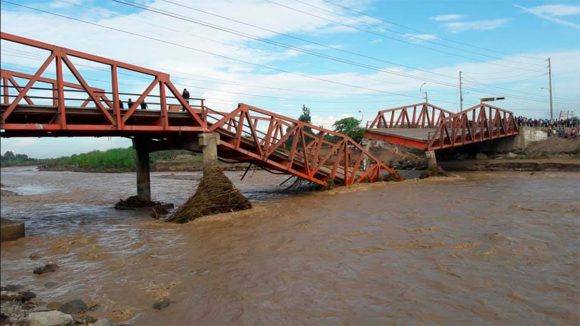 A national emergency was not declared by the President Pedro Pablo Kuczynski, however several of the worst affected provinces declared the state of emergency. 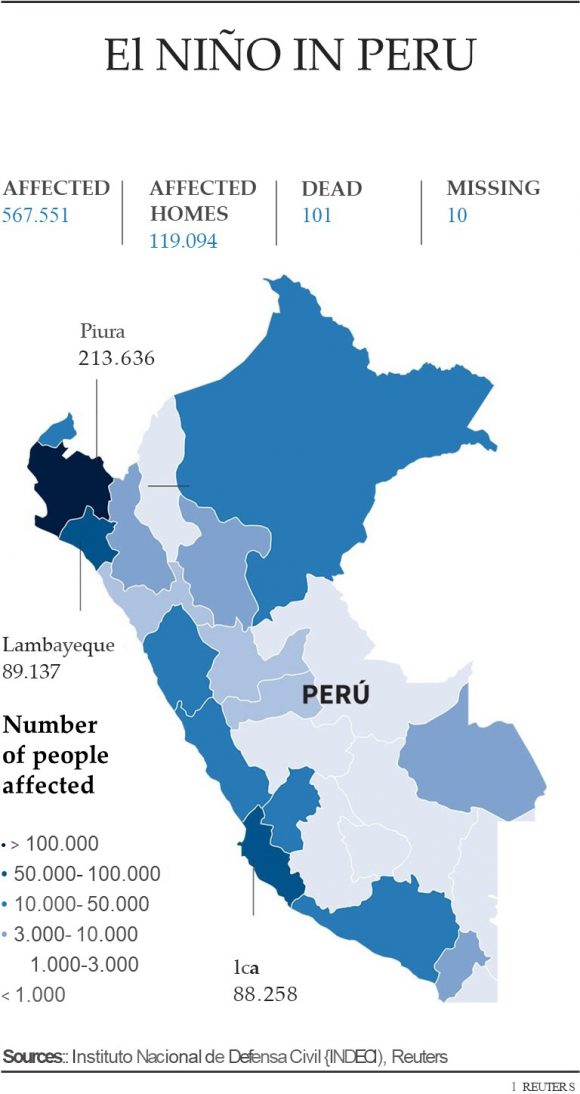 In the aftermath of the crisis, ICTs emerged as an incredibly useful tool to spread information across the affected communities.

As entire areas of the country were cut off from each other, it become increasingly difficult to, while in the provinces as I for instance was, to rely on official news bulletins coming out of Lima (any news agencies would not know any more than we did as they could only rely on people on the ground).

The Ministry of Defence, coordinating with other private and public entities, coordinated a hashtag known as #UnaSolaFuerza, which become a key information distributor and also a way for people to get involved (volunteer, donate money or other utilities to the affected across the country).

A webpage (www.unasolafuerza.org) opened up on which civil defence, the military and other trusted sources (such as the Peruvian meteorological institute) would provide reliable information and guidelines to the affected population. Facebook, Twitter, Instagram, WhatsApp and other mobile technologies (Internet connection is widespread in Peru and accessible for virtually anyone via smartphones or home WiFi-connection).

For aid workers, it become increasingly important to keep up to date with what was going on in ICTs than what was being cabled out through official channels. Obviously here a problem emerges – what about reliability? What happens when aid workers and other key actors in emergency response are reliable on information which´s authenticity cannot be cleared? 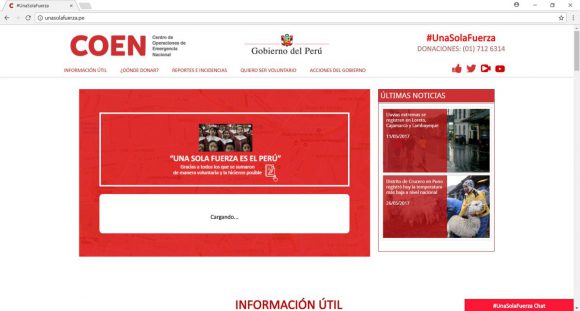 In Peru, we also saw the spread of false information during the crisis, deliberately supposed to cause sensation among users nationally and globally. For instance, we saw Tapia & Moore (2014) have argued in an article entitled Good Enough is Good Enough that we should not be deterred by this development. In fact, emergency aid workers often have to cope with information that is more or less reliable in times of crisis.

Nevertheless, they argue, there is an opportunity to develop tools (i.e. software, smartphone apps) that can process and provide an overview of what is going on on ICTs platforms so that aid workers can use this information. This know-how, they argue, is currently not available to the aid community and would require involvement from tech-companies and other relevant actors.

The #UnaSolaFuerza hashtag united the country, everyone was using it for their support and help efforts for those affected. In a sense a void was filled by ICT, here people who were united by difficulties they were going through managed to unite under the banner of survival.

Evelin Chamorro was dragged for several hundred meters by a landslide and suddenly found herself under debris in the dirty water. She managed to survive the traumatic experience and video images of her doing so went viral. Her story of survival and struggle become of tremendous symbolic value for millions of Peruvians as they faced the dangerous floods and landslides. Video source Latina.pe, taken from YouTube.com

Where do we go from here?

#UnaSolaFuerza showed that the aid community, the government and civil society can use ICTs as a powerful platform. However, it also showed that there are several actors that need to work together for this to happen. On one hand, authorities need to embrace the new technology and trust them to work officially in the aid efforts.

Secondly, the civil society must be responsible and, on one hand, not produce and share information of dubious origin with each other – become savvy if you like, be able to tell whether news and information is useful or not.

Thirdly, it is key that technological actors and authorities work together to produce key platforms that will be able to filter out “fake news” before they hit social media (using geo location, reading of images that are from other places, searching for particular phrasing et cetera) basically using the same technology that big-tech giants use for commercial purposes.

Also there is an important lesson to learn for Peruvians as we move ahead from El Niño-floods – Social Media and ICTs can be powerful tools for change. For instance, much of the damage was caused by heavy rain but had not the infrastructure been so poor to begin with, perhaps the tragedy would have been much less fatal. In a country severely affected by corruption perhaps the interesting thing to see in the future is whether Peruvians will use ICTs to rid the country of that, perhaps even greater, calamity?