One of the world’s greatest environmental tragedies is happening right before our eyes.  According to Greenpeace the destruction amounts to about six football pitches a minute. Mainly mining, agriculture and other economic activities causes the deforestation. However, Amazon native Indians teamed up with Greenpeace back in 2015 and with the help of a little bit of ICTs they are fighting back.

Over the last 40 years the Brazilian part of the Amazon has been reduced  by a fifth of its’ total size. The deforestation in the Amazon rainforest is not only a local environmental tragedy – it has some very wide stretching global effects.

The Amazon works as a sort of a global lung. As deforestation advances CO2 is released into the atmosphere and the rainforest’s ability to absorb CO2 in the atmosphere is already severely decreased.

Deforestation of the Amazon increases and accelerates global warming. There is no sign of the current deforestation rhythm decreasing. In neighbouring countries a similar development is being seen.

How can this development be deterred?

The ka’apor : Tribe On The Frontline

Those who are directly affected by the Amazon deforestation are the many tribes who live in the rainforest. Some of these never even had contact with “civilisation”. Others still live in the same way as they have been living for thousands of years with only sporadic interaction with majority society.

In September of 2015 one tribe in the Brazilian Amazon took matters into their own hands. The Ka’apor tribe started setting up surveillance cameras in their area. Alongside Greenpeace they are aggressively keeping illegal lodgers and others who attempt to destroy the forest out. 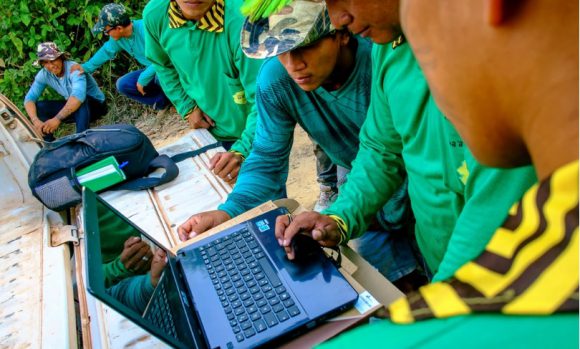 Armed with a strange combination of arrows, GPS, trackers and cameras they hope to use technology to do something about the illegal lodging going on in their area and hopefully make the rest of the world aware of what is happening to them.

No doubt this is dangerous business. In 2014 Eusebio, a chief of the Ka’apor, was murdered by illegal lodgers. The cameras, with the support of Greenpeace, are placed out in the forest and activated via motion detectors. Later on, they are collected by the Ka’apor in order to analyze the recordings.

“We are standing up for what is ours. My father is gone, but I’m here fighting next to my people. We are all relatives…We’re the Ka’apor. We will not forget. Our spirit is very close to the jungle, not to any city.”

Iraun, son of Eusebio, the a Ka’apor chief that was murdered last year.

ICTs in the Amazon: Potential But Still Some Way To Go

Getting a good reception in the Amazon for internet access is definitely easier said than done. Thus, to be able to actively communicate and share the information collected by communities like the Ka’apar to the rest of the world was not possible back in 2015 and still is a problem. 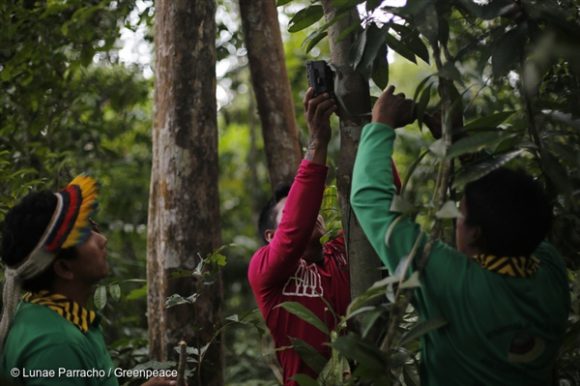 However, it seems evident that Internet connection, smartphones and clever use of technology can be powerful tools for communities facing the dangerous struggle of preserving the rainforest in the Amazon going forward.

Because what is clear from the work done by Greenpeace and Ka’apor is that is extremely dangerous.

Armoured vehicles, murders, threats is part of the everyday reality for those brave enough to stand up to illegal lodgers and other powerful economic players (i.e. soy bean industry, ranching) that benefit from the deforestation in the Amazon.

Such threats become more costly in a world where those who are under threat can tell others about what is happening to them and why. This also, indirectly, puts pressure on the Brazilian government to act up against deforestation in the Amazon. A passivity that was, according to the Ka’apor, the very cause of them taking matters into their own hands.

Technology most definitely has a key role to play in saving the Amazon.

First of all, it seems likely that the kind of actions taken by Ka’apor will be much more effective with tech-tools that can help those who protect the forest to see more in the vast Amazon basin.

Secondly, it allows for tribes and other groups to submit information about their situation to authorities and society at large. Such information could hopefully raise awareness and put these groups in touch with supportive mechanisms overseas.

Photos (unless noted differently in the photo) by Felipe Larrozza for Vice – Motherboard Brazil.