Digital technology is rapidly advancing opportunities that enable people to live more productive and healthier lives in all parts of the world—including developing countries. Convenience, time, money, and access to education and healthcare are just some of the benefits derived from digital technology.

Here is a look at four communications technologies that are working to improve the lives of people in the developing world.

Thailand is a country in Southeast Asia with an economy partially driven by seafood exports. Thailand was at risk of having these vitally important commodities banned by the European Union and the U.S. State Department due to human rights concerns within the fishing industry. But thanks to a number of initiatives and policies working to improve seafood workers’ welfare—including use of information communication technology (ICT)—Thailand is slowly moving in the right direction.

For instance, one of the problems that has historically occurred in the fishing industry—with particular concern in Asia—is that workers can be recruited under false pretenses to work on fishing vessels, some of which practice modern day slavery. These vessels can keep workers at sea for long stretches of time, sometimes years, by operating in remote parts of the ocean that are difficult to monitor. The unethical operators of these vessels will use other boats to transfer goods so the fishing vessel does not have to return to shore.

To combat this issue, Thailand has instituted a law that requires Thai vessels operating outside national maritime borders to provide communication devices through satellite technology so workers can communicate with their loved ones at home and report any human rights violations. Chatting applications like “Fish Talk,” which are installed on some vessels in Thailand, facilitate messaging between workers and their families on shore.

This is a significant advancement for seafood workers in Thailand, and the satellite technology installed on vessels is used by some civil society groups to track vessels at sea. But some human rights activists worry that the requirement for satellite communications is hard to enforce given the vastness of the sea, and a few success stories of ethical companies doing it right could be used to brush the issue under the rug. Authorities and worker welfare organizations need to know where to look to be able to find vessels—but since the ocean is so large, this is complicated.

But the potential for ICTs to combat modern day slavery at sea is a force to be reckoned with. With time and political will, ICTs can greatly improve the lives of directly at-risk seafood industry workers and those who would suffer from trade restrictions imposed by countries that import Thai seafood. 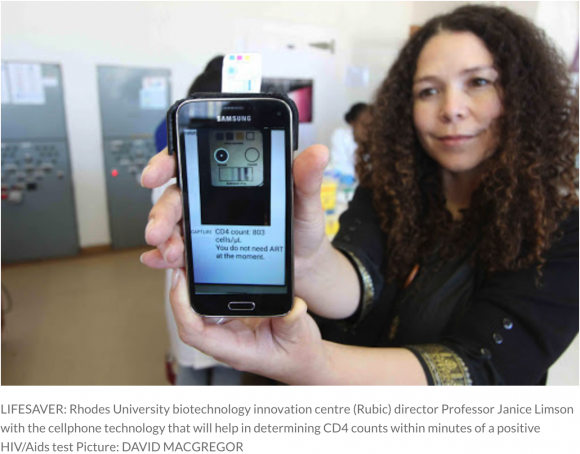 A large part of the innovation is in the development of cheap diagnostic “strip-tests” that count biological markers of these diseases via blood samples collected in the field. Where ICT comes into play is through the use of mobile devices to analyze the sample on the spot, which not only saves money and time, but can also save lives. The sooner these infectious diseases are detected, the more likely they are to be effectively treated.

The biomedical science behind this is very complicated, but the resulting implementation is really simple. A basic plastic cellphone attachment is 3D printed and paired with a custom app that can give an accurate diagnostic result at people’s homes in remote communities within 20 minutes, as opposed to the weeks it traditionally takes for patients in parts of the Global South to travel to far away clinics and wait for results that are often sent to an even further away lab.

What do solar power, mobile phones, RFID tags, TV white spaces and wait for it–a helium balloon–have to do with reducing hunger? A lot thinks Bill Gates, cofounder of Microsoft and the Bill & Melinda Gates Foundation.

A pilot project called FarmBeats, just outside Seattle, Washington in the U.S., is showing promising results using these things to produce data that is improving productivity and increasing crop yields. The hope is that this technology can be scaled for poor farmers around the world.

FarmBeats collects data on soil pH and moisture levels via aerial imaging to understand the conditions of crops, saving resources and time spent on monitoring, fertilizing and watering.

There are systems out there that collect this data, but the sensors placed in the soil and drones tend to be too expensive for poor farmers, and they require Internet access to connect the data collected by the sensors and drones to useable interfaces, such as a computer.

How is FarmBeats different?
FarmBeats puts cheap RFID tags in the ground to collect data about soil conditions (instead of expensive sensors provided by alternative systems); it uses a helium balloon attached to a mobile phone with the camera facing down to capture aerial footage of the crops (instead of a drone); it uses TV white spaces to transmit the captured data to a computer (instead of Internet); and it uses solar power instead of electricity to keep everything running.

What are TV white spaces?
“White spaces are unused TV broadcast spectrum. If you’ve ever watched an old TV, you’ve seen white spaces before. They’re the “snow” you’ll sometimes see while flipping through channels. These gaps in spectrum are plentiful in the remote areas where most farms are located, so data can be sent over them the same way that data gets transmitted via broadband.”

The take-home message: FarmBeats is applying simple ICT solutions available to most people to make farming more productive and cheaper for people around the world, which is so important given that more than 75 percent of the world’s poor depend on agriculture for financial and food security.

This must be caveated with a note about the potential disconnect between data and its use. Analysis is often a learned skill: “The enthusiasm for data [in the aid community] is vastly outstripped by the capacity to meaningfully analyse it. […] Data is not knowledge” (Read, Taithe & Ginty, 2016, pg. 1-2). In other words, while FarmBeats makes it easier to collect data, it assumes end users will know how to use the information to get better results from their crops.

As a 2015 Harvard Business Review study found, people from lower socioeconomic brackets in developing countries are more likely to enroll in a MOOC for the sake of education as opposed to career advancement, and they also are the most likely to report benefits from the MOOC. Over 90 percent of those with a lower socioeconomic status reported educational benefits compared to 86 percent of those with higher incomes.

Capturing the specific impact of ICT4D can be difficult, though, and Global South participation in MOOCs underscores why this could be. Many ICTs empower individuals to choose and pursue their own development outcomes, and technologies are generally part of complex, layered development processes (Kleine, 2010).

MOOCs provide tools for individuals to lift themselves out of poverty, but there are other systemic development factors at play too, meaning it is difficult to parse out which one has driven specific development progress.

These examples highlight the fantastic benefits of ICT4D through creative applications for the developing world. But without policies that promote equal access and careful oversight of innovation marketization, gaps in digital literacy and access, this ‘digital divide’ is quickly becoming a new development challenge, and ICTs could be used to inhibit people’s rights.