Have you heard about #MeTwo? Yes, you’ve read correctly. It says #MeTwo, not #MeToo. If you don’t happen to live in Germany you might not be aware of it. So what is it all about?

In July 2018 Ali Can initiated the German networked movement #MeTwo. Can was inspired by the professional German football player Mesut Özil who – after leaving Germany’s national team – stated that he has always felt he belongs to two cultures: the Turkish culture of his ancestors and the German culture in which he grew up. Apparently many Germans who have a migrant background felt similar. The hashtag #MeTwo quickly gained momentum on Twitter.

Within a month more than 200.000 tweets with the hashtag were written. During this time the movement evolved. Tweets started to discuss the issue of inequality. Many added their voices. Germans who have a migrant background wrote about daily racism that was expressed in rude behavior and insults. As #MeTwo was active on Twitter activists didn’t stay in an echo chamber as they probably would have been on Facebook. Besides negative experiences, some Germans who have a migrant background shared positive experiences. In addition, other Twitter users strongly criticized the #MeTwo movement for being biased.

Due to the current relevance of the topic of migration in Germany, #MeTwo benefited from enhanced visibility. It became a hot topic. Mainstream media picked up. Every major newspaper and magazine discussed #MeTwo and the problems it addressed. In our attention economy the free media coverage of #MeTwo was pure gold for the movement. So did #MeTwo turn out to be a success?

Not at all. The movement has been disappearing as fast as it had appeared. The number of searches for #MeTwo on Google indicate a strong decline in interest in the last 90 days in Germany. According to Google Trends #MeTwo had its heydays in late July and early August. Has the interest on Twitter remained stable?

Searches of #MeTwo on Google in Germany in the last 90 days.

Again no. #MeTwo has lost momentum and is moving towards irrelevance on Twitter. In the last two months its popularity has been constantly decreasing and it is likely to continue doing so. However, a social movement like #MeTwo shouldn’t be solely judged on intermediate indicators like the number of tweets, but rather on its capacities. So how capable is the movement? 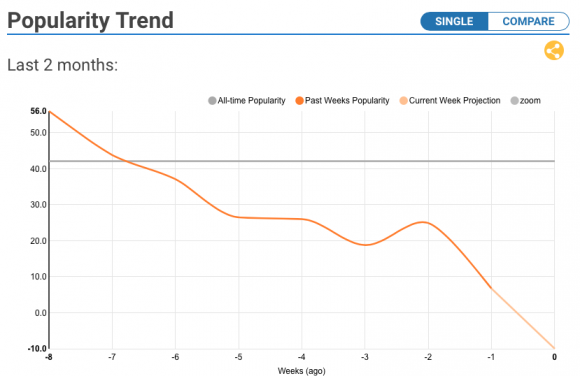 The popularity of the hastag #MeTwo on Twitter in the last two months.

In terms of narrative capacity #MeTwo excels. On Twitter activists don’t face gate keepers and therefore have complete control over their voices and can state their point of views independently. However, being only present on Twitter #MeTwo lacks disruptive and institutional capacities. The movement hasn’t interrupted any operations or interacted with politician or other institutional decision makers to start an actual change. In spite of the protest business goes on as usual in Germany. Why did the movement not press harder?

Like many modern networked movements #MeTwo isn’t centralized, but leaderless. Its founder Can has appeared neither as a leader nor as a spokesperson of the movement. No one formulated a common goal or developed further steps.

#MeTwo never went past its initial stage. Many joined the viral discussion on Twitter. But the movement never left the social media side. It didn’t scale up to mass mobilization. Not even to micro mobilization. As far as I know there was no mobilization at all. The stereotypical fast growing support followed an even faster decline, as social media only established weak ties between the activists.

Tweeting resulted in a connective action for the activists of #MeTwo. They state frustrations they have previously kept to themselves. Suddenly they find like-minded others. Through the public sphere the activists find common ground. As they share similar experiences they develop a collective identity. However, even though they share ideas and values, they aren’t interpersonally connected.

More than other new protests movements #MeTwo is self-motivated. Everyone wants to mention his or her personal story. Instead of a common goal, personal expression is at the center of attention. I consider this the main problem of #MeTwo. Maybe offline meetings would have strengthened the weak ties between the activists and increased their connectivity. What do you think? How could have #MeTwo used its promising start to develop further?

This entry was posted on Saturday, September 29th, 2018 at 1:43 pm and is filed under Activism, Social Media. You can follow any comments to this entry through the RSS 2.0 feed. Both comments and pings are currently closed.