What activism used to be before the 2000’s

Before the rise of our digital culture, whether you could join a social movement, depended pretty much on where you were located. You wanted to join the protest against the Vietnam war in the USA, but were nowhere close the country? Sorry, but no one would have noticed your effort.

What activism has become since then

Technology has changed everything. It changed our societal architecture meaning most of us have become more visible and more accessible, and therefore can connect to others more easily. Like the public sphere, activism has become digitally networked. Physical attendance is not a major requirement anymore. Nowadays almost every movement has social media sites. Especially in a movement’s initial phases social media stirs up attention and drives traffic. You wanted to join the Occupy movement, but lived in the North of Finland? No worries. You could join digitally. Fancied to support the Gezi Park protest, but were stuck in the middle of Russia? Social media platforms awaited you nonetheless. Well, maybe no if you were in the middle of Russia, but you catch my drift.

While activism changed, the role of activists evolved simultaneously. What used to be a presence-based time consuming effort has become something you can do on your couch from your smartphone while watching Netflix. It probably does not even feel like activism. So what does it take to be an activist in these times? Is it enough to join a group on Facebook? Write a provocative tweet? Upload a photo on Pinterest?

As a matter of fact, liking or sharing something on social media doesn’t indicate anyone is more compelled towards a cause. Research found that anyone who gives such public support is not more likely to provide meaningful support than someone who was randomly asked to do so.

So do many people publically support a cause only because of the social pressure? Is online activism about social gain instead of social change? Welcome to the world of slacktivism.

Taking the active out of activism

Activism through clicking was labeled slacktivism. Some argue that slacktivism distracts from productive activism. Others think that it is a valid form of activism nonetheless. I think that to some extent slacktivism is the opposite of traditional activism: high in usage of technology and low in participation. But is the poplar bashing of so-called slacktivists justified? 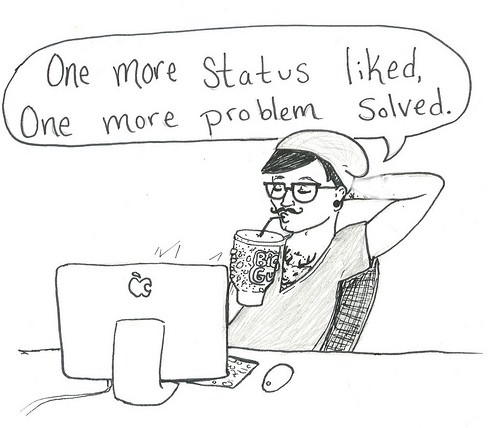 I don’t think so. In my opinion there is nothing wrong with being on Facebook to support social or development causes instead of being physically present. Online-only activists will probably not start a change. So what? Maybe they can’t provide any more resources, because they are short on money. Maybe they have two jobs to get their families through and no time to spare. Maybe they just don’t intend to be activists. At least these social media users get exposed to a topic they wouldn’t have been exposed to otherwise.

Social media activism provides a great starting point. Sure, most users who virtually support a cause like the Kony 2012 movement will not take any further steps. But others, admittedly fewer, will. Some slacktivists care so much that they turn into activists.

What do you think about activists, slacktivists and everything in between? Who qualifies for you as an activist and who doesn’t?

This entry was posted on Friday, October 5th, 2018 at 3:37 pm and is filed under Activism, Social Media, Youth. You can follow any comments to this entry through the RSS 2.0 feed. Both comments and pings are currently closed.