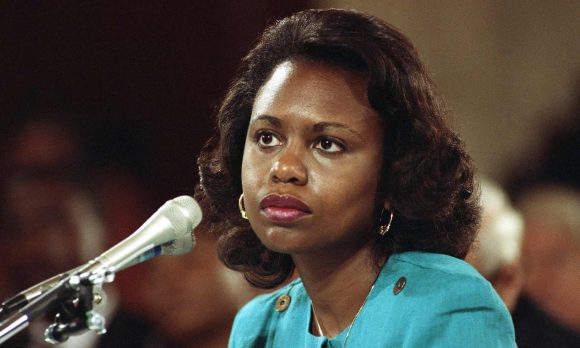 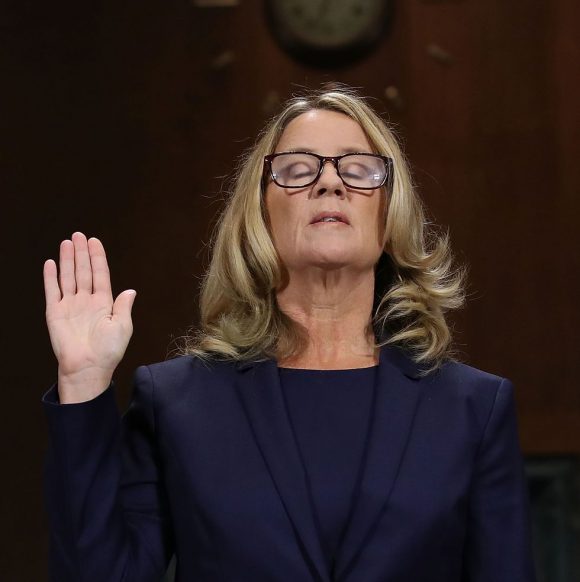 Nearly 60 protesters were arrested while making a statement against the nomination of Brett Kavanaugh. In Washington, a crowd of protesters raised fists and palms in the air, bearing the phrase “Believe Women” or “I Believe.” 1,000 demonstrators repeatedly chanted, “We believe Christine Ford, we believe Anita Hill.” Supporters for Ford had black tape across their mouths that read, “Believe women.” On Twitter #IBelieveChristineBlaseyFord #KavanaughHearings #WhyIDidntReport were trending. #WhyIDidntReport is a response to Trump’s tweets questioning Ford for not pressing charges. Under the hashtag thousands of women described why it took them many years to talk about their attacks. Celebrities like for example Alyssa Milano, Kathy Griffin and Amy Schumer supported the activists and Ford both through their social media channels and some even in person. 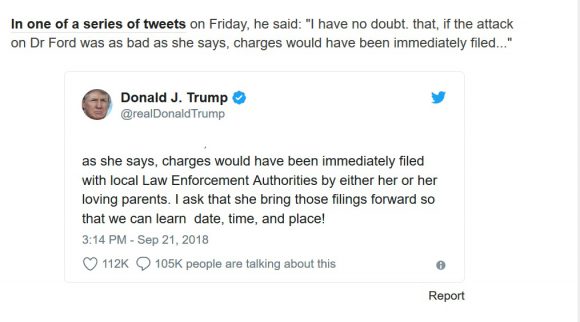 President Donald Trump later made fun of Ford at campaign rally and told reporters that it’s a ‘scary time for young men in America’ because ‘you can be guilty of something that you may not be guilty of’. This further provoked the activists.

The politicians needed to decide. Would they stick with Kavanaugh or find someone less controversial? If Kavanaugh would stay it would mean that those who voted for him either did not believe Ford or did not put enough value in the allegations. That was a triggering point for many activists. The questions the people with power needed to ask themselves was: Is he really fit to sit in the supreme court? It is a job interview and is he the best America has got? 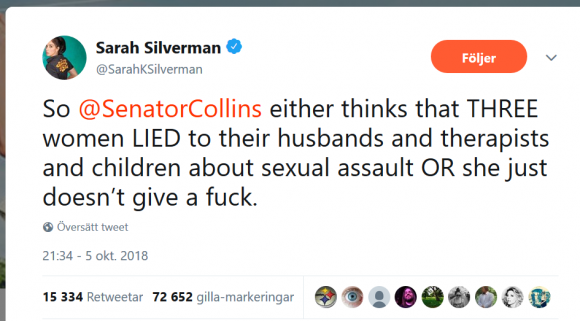 Activists confronted senator Jeff Flake to make him change his mind about accepting Kavanaugh, who later called for an FBI-investigation about the sexual allegations. The clip was spread online through social media channels like twitter and Trump tweeted “The very rude elevator screamers are paid professionals only looking to make Senators look bad. Don’t fall for it! Also, look at all of the professionally made identical signs. Paid for by Soros and others. These are not signs made in the basement from love! #Troublemakers”. It is not only through and between activists that information travel fast. Things happens fast and the people involved are able to respond and react to the events.

Despite the allegations and the drama, a majority of the senate chose to vote Kavanaugh through about a week later. Trump made sure he was sworn in as soon as possible and expressed how sorry he was that Kavanaugh had faced allegations, “On behalf of our nation, I want to apologize to Brett and the entire Kavanaugh family for the terrible pain and suffering you have been forced to endure.” That he was now “proven innocent” of allegations of sexual assault (which is not a completely truthful statement).

The same outcome as with Anita Hill in 1991. People were pointing at #MeToo. The activists thought that things would change. That time was up. But the people in power chose to support Kavanaugh. In the supreme court there have been 108 white men, four women and two black men.

This entry was posted on Wednesday, October 10th, 2018 at 1:21 pm and is filed under Activism, Gender, Journalism, Multimedia, Social Media. You can follow any comments to this entry through the RSS 2.0 feed. Both comments and pings are currently closed.