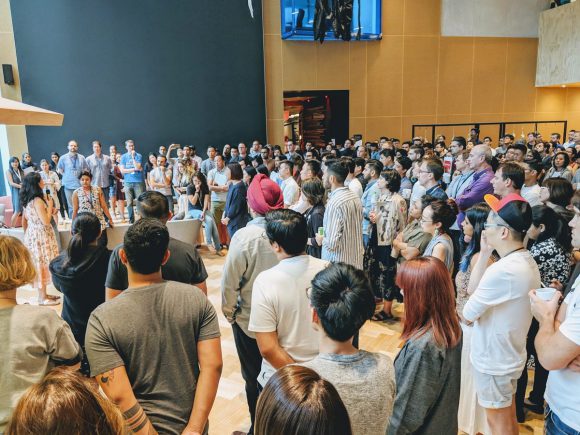 At 11.10 am in Tokyo, Google employees began standing up form their desks and leaving their office building in what was the start of a Global Walkout. People have walked out in Singapore, Zurich, London and Dublin.

Called ‘The Walkout for Real Change’ this protest was called one week after Google gave a $90m (£70m) severance package to Andy Rubin, who is credited as the creator of the Android software for mobile phones. However, the severance deal and all announcements around it failed to disclose the details of a serious sexual misconduct allegation that directly led to his departure. While Rubin has denied the allegations, employees across the company feel that the company is not dealing with the allegations harshly enough and sexual offenses by executive are being handled very leniently.

The protest organisers are encouraging employees to leave a note on their desks saying: “I’m not at my desk because I’m walking out in solidarity with other Googlers and contractors to protest [against] sexual harassment, misconduct, lack of transparency, and a workplace culture that’s not working for everyone.”

As often happens in protests, what began as anger again the impunity of senior management has developed into a wider protest about conditions within the company. Employees have issued a set of 5 demands:

Mike Clancy, the general secretary of Prospect, the UK union for technology workers, backed the protest. He said: “The events at Google highlight the frustration many workers feel about their lack of voice in how many tech companies are run. We need a zero tolerance for harassment and greater transparency over terms and conditions for staff.”
Tweets by GoogleWalkout

UPDATE 12.44 GMT
The Guardian is reporting that more employees have come out. Huge walkout in Dublin – Google’s European Headquarters 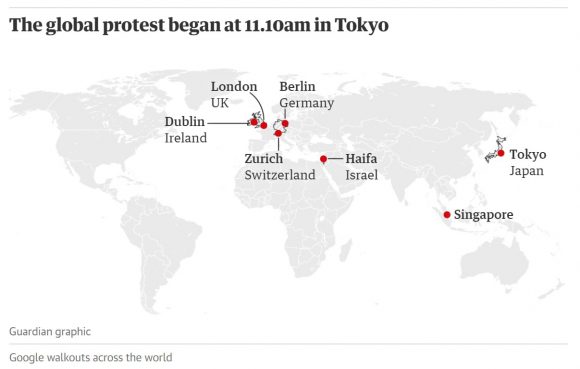 “Chants of “Stand up, fight back” and “Women’s rights are worker’s rights” reverberated through a crowd of several hundred workers who gathered on the eastern edge of the company’s vast Mountain View campus around 11am on Thursday.”

This entry was posted on Thursday, November 1st, 2018 at 1:11 pm and is filed under Activism, Campaigns, Social Media. You can follow any comments to this entry through the RSS 2.0 feed. Both comments and pings are currently closed.