In Information Politics (2015), Tim Jordan describes how the securitisation of the internet has long preoccupied authorities. Edward Snowden’s revelations regarding the mass surveillance of millions of innocent people were just the latest to expose a pervasive policy of total surveillance of electronic communications which by its very nature threatens civil liberties.

Surveillance and other attempts to disrupt and discredit the work of activists are by no means limited to authoritarian regimes. But as I am based in one, that will be my main focus here.

If you take a stroll along the banks of the Mekong river in central Phnom Penh on a Saturday night you will find the pavements aglow with smartphones as people take selfies and scroll through Facebook. For most Cambodians Facebook is the internet. Khmer language script is badly supported on just about every software interface so people mostly access and share photos and videos. Most use the platform for entertainment — not for news — a trend noted in other authoritarian and dictatorial regimes (Heeks 2018). 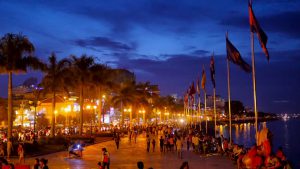 Cambodians are slow to talk politics outside trusted circles of friends and family — and for good reason, as politically motivated threats and arrests are common. Despite this, in the past two years there have been more than a dozen arrests for critical Facebook posts. Most of them have been ordinary citizens, unaware that online criticism could land them in jail.

Others have been opposition members caught up in a deepening crackdown which saw the main opposition party outlawed and its leader jailed. While some level of dissent was previously tolerated, that ended abruptly in the run up to the 2018 general election as the opposition and civil society groups with a history of mobilising or supporting communities and grassroots activists were targeted with physical, administrative and judicial harassment.

A 73-year-old barber was sentenced to a year in prison because of his Facebook page. The posts showed Hun Sen in a car with King Shiamoni, a clip of distressed villagers dealing with a flood, and unfavourable comparisons of the royal to the former king.https://t.co/SC9QRXIXOX

When the authorities began to close down public space with threats, surveillance and harassment, Cambodia’s more digitally connected activists continued to protest online — most of them very carefully, in closed Facebook pages or discretely on Twitter which is relatively unknown to most Cambodians. The country’s human rights groups stayed quiet during the worst period of the 2017 crackdown when there were heavily armed troops in the streets. Since then they have remained careful, shifting a lot of public advocacy to the private and international sphere, only gradually returning to speaking out and doing so collectively for safety as well as self-censoring.

Some governments today, Cameroon being a notable example, still consider shutting down the internet to be a viable way of controlling dissent.

But most authoritarians now use more sophisticated methods. Cambodia still employs some blunt instruments, recently passing a law giving authorities the power to shut down or block critical websites. This power was used in the run up to the July general election when 17 news and opinion sites were blocked. But anyone who wanted to access those sites only needed to download a free ToR browser.

Other methods have been far more successful.

Tufecki (2017) outlines a range of strategies governments employ to fight activists online. Many of them — invariably aimed at preventing large-scale mobilisation by critics — are now widely deployed in Cambodia.

Rather than shutting down internet access or seriously attempting to block sites, digital era censorship is more about denying activists attention, focus, and credibility. This is done by a mix of information overload, disinformation, harassment, hoaxes and fear mongering — all hallmarks of Cambodia’s digital media landscape in 2018.

Many draw parallels to China, which has poured investments into the country including military support and assistance to Cambodia’s interior ministry. A Chinese-funded TV channel was opened with headquarters inside the ministry at the same time as independent radio stations and newspapers were being shut down in 2017. Its content focuses on crime as well as entertainment. As with all Cambodian broadcasters (with the exception of the online Voice of Democracy), news broadcasts consistently laud the government’s successes, demonise the now-outlawed opposition and publicise the governments narrative of events.

“In the networked public sphere, the goal of the powerful often is not to convince people of the truth of a particular narrative or to block a particular piece of information from getting out (that is increasingly difficult), but to produce resignation, cynicism, and a sense of disempowerment among the people.” (Tufecki 2017: 228).

One of the most powerful illustrations of the policy to foster resignation, as well as spreading fear, is the Cambodian government’s constant harping back to the Khmer Rouge era. These reminders are accompanied with threats of a return to the genocidal regime if a US-backed “colour revolution” is not stamped out.

This narrative — linking peaceful uprisings in post-Soviet states and the Arab Spring to an alleged US-backed uprising in Cambodia — has been constantly peddled on television, government-controlled radio and print media, and on heavily sponsored Facebook pages.

Anyone challenging the narrative, or even attempting to support grassroots advocacy for fundamental rights, is dubbed a colour revolutionary and faces media demonisation, harassment and arrest.

This makes it very difficult for civil society to organise and advocate for change — offline or online. It is causing an existential crisis for many NGOs, grassroots movements and associations. Cambodia’s fragile civil society, including thousands of NGOs and associations, was largely built up by foreign donors since the early 90s.

But the new post-crackdown normal requires a radical rethink of how civil society can move forward, including any role that new media and ICTs might play in defending and eventually increasing civil society space.