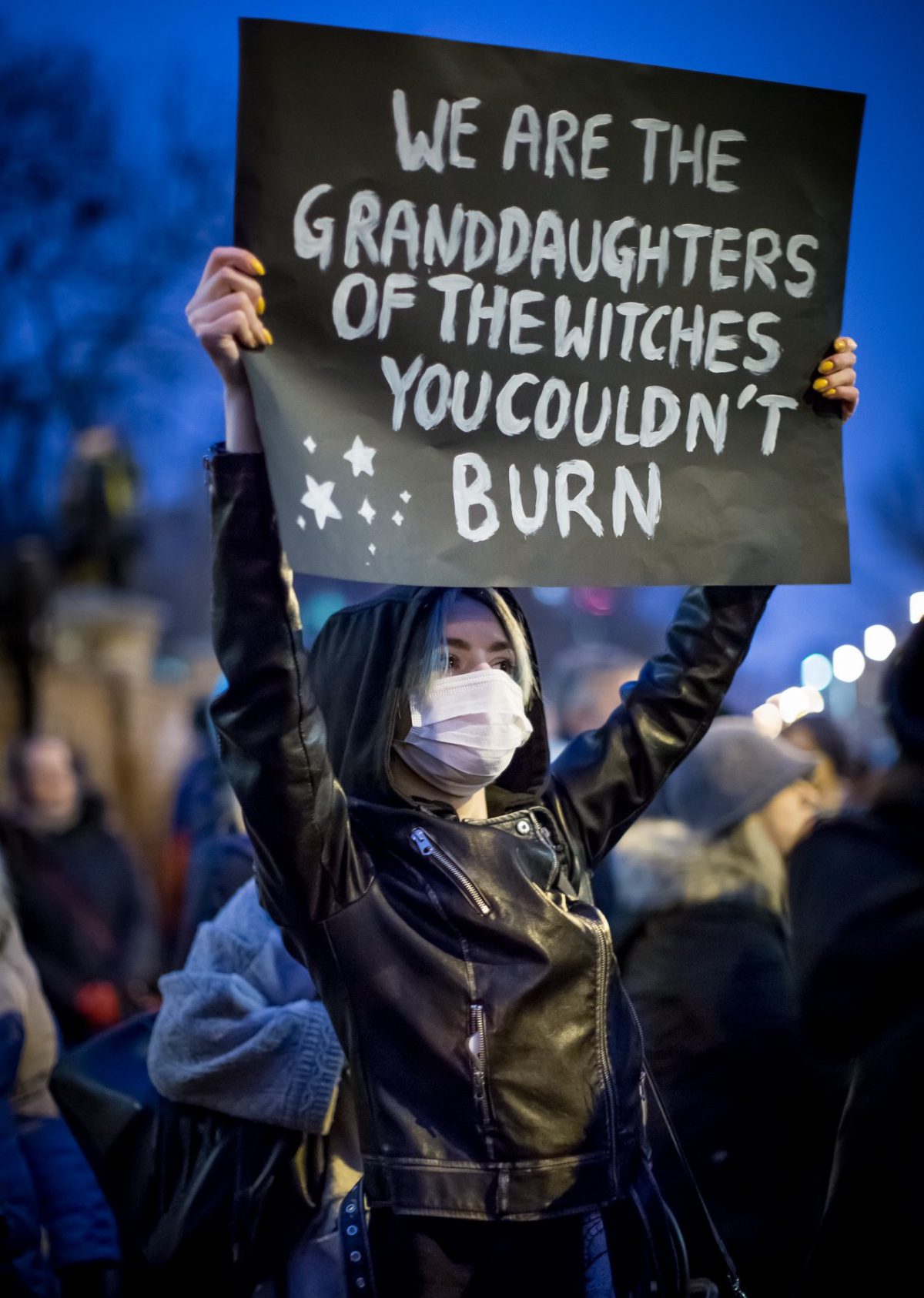 “The future of the heretic increasingly became that of a woman, so that, by the beginning of the 15th century, the main target of the persecution against the heretics became the witch.” (Federici, 2004)

Back in the 1960´s, women demanded equal rights in every sphere by way of protests, some of them leading to many social changes as the right to birth control and reproductive rights. One of the protests from that time grabbed my attention. It was one lead by a group of women who called themselves Women’s International Terrorist Conspiracy from Hell (W.I.T.C.H.) On one occasion, they were dressed up like witches challenging white men’s canon at the University of Chicago, giving a hex to people:

“Knowledge is power through which you control, our mind, our spirits, our bodies, our soul, HEX!”

This performance, though looking for social justice, still used the cartoonish image of the witch without providing a more in-depth understanding of why they were using those outfits. Consequently, the image of the witch continued to be one of the women who practice witchcraft, eat kids or the contemptuous appellation for a malevolent or repulsive-looking old woman. These protests never change people’s minds about what a witch was—the stereotype prevails.

Now, forty years later, women are still fighting to keep their fundamental rights to control their own bodies and decide for themselves. One could ask why when it comes to the rights of women and girls, there is always someone else who is deciding what matters and does not matter rather than women themselves. Along the same lines, Della Porta & Diani point out in their Social Movements: An Introduction (2006) “in different ways, and with a wide range of goals and values, various forms of protests have continued to emerge in recent years,” and in the case I discuss here, the reason is that women are not being heard.

Admittedly, the wave of mobilizations often identified as the global justice movement, Della Porta & Diani assert, seems to have the potential for a global, generalized challenge, combining themes typical of class movements with themes typical of new social movements like gender equality. The movements take myriad forms, from individual utterances of dissent and individual behavior to mass collective events, and from various points of view such as the W.I.T.C.H. protests.

With regard to communication practices, I insist that as part of the global women’s rights movement, one can observe how activists use the media to communicate goal oriented messages (Martín-Barbero in A. Mattoni & E.Treré, 2014). It is important to point out how these movements found new pathways to construct shared meanings and narratives, and to articulate identities in a social process that was fundamentally a highly embodied and emotional experience movement (Tufte, 2017). These resources have become crucial aspects of social movements over time; the activists use media such as Facebook and Twitter to organize demonstrations, and through “actions that affect individual lifestyle and private behavior” (Della Porta & Diani, 2006). In this sense, Mattoni & Treré (2014) overlook what I already mentioned in a previous post on an important point about media: being a socially, culturally, and even politically situated infrastructure that intertwines with the constitution of political subjects.

Today, as in 1968, W.I.T.C.H. still follows the same spirit and strive to enhance political consciousness through public rituals and protests—these activists continue to use the image of the witch. This also reminds us about a message seen in many protests in the wake of the #MeToo movement and the Women’s March—“We are the granddaughters of the witches you couldn’t burn”. Recently, other “witches” even placed a hex on US Supreme Court Justice Brett Kavanaugh, an act strongly criticized. Yet, one could wonder if these activists do really know about the history of the so-called witches and since when we are fighting for the control of our bodies?

According to Federici, it is conceivable that in the sexual and reproduction codes of the heretics we may actually see the traces of a medieval attempt to birth control. This, Federici asserts, would explain why population growth became a major social concern, at a time of severe demographic crisis and labor shortage in the late 14th century, heresy became associated with reproductive crimes, especially “sodomy”, infanticide, and “abortion”. Moreover, the efforts which the church made to establish its control over marriage and sexuality enable it to place everyone under its scrutiny and disciplinary rule. Further, with the III Lateran Council of 1179, the Church intensified its attack on “sodomy”, targeting at once gay people and non-procreative sex, and for the first time, it condemned homosexuality as the incontinence which is against nature. In sum, sexuality was completely politicized with the adoption of this repressive legislation (Federici, pp. 36-38).

Certainly, there is a necessity to comprehend what happened to us as women before, and why in 2018, we still have to protest against extreme politicians trying to reduce our fundamental human rights, and why these fights are only to be made by women alone, why women movements are not supported by men as well? Ain’t we all human beings?

In her introduction to Caliban and the Witch, Federici mentioned the necessity of revisiting the witch hunts became pressing for her through her involvement with the feminist movement of the early 1970´s—the Wages for Housework movement in particular (2004).

Therefore, what is important in Federici’s work is that it shows how the birth of capitalism required a war against women. The witch became the embodiment of a world of female subjects that capitalism had to destroy: the heretic, the healer, the disobedient wife, and the woman who dared to live alone and whatever the Church and state decided what women should not be.

In a recent interview, Federici contends:

“I always assumed that you don’t understand any social phenomena unless you identify the social forces that shaped their development and the social, historical context in which they emerged. In the feminist debates concerning the nature of housework, many accepted the liberal notion that housework is a personal service, belonging to a private sphere free from capitalist relations. It was important, then, to demonstrate that this was not the case, that although reproduction is a transhistorical process, housework—in other words, reproductive work as we know it, has been a specific, historically determined construction defined by the capitalist class.” (Federici, 2018)

In this sense, I agree with Federici’s argument because to raise awareness about the importance of reconstructing our history from women’s perspective it is essential to understand our present circumstances.

In sum, then, even though we have access to information through media, it is amazing how weary we could be when it comes to search the reasons why this and why that. Admittedly, digitalization has reshaped social interactions but still, it is not being used in the right way. No doubt abuse of power comes as no surprise.

If we don’t have an understanding of what gave rise to the status quo, there is no way we can realistically hope to change it.

We can do anything. Grab ’em by the history!