Steve Lambert, a veteran activist, and Stephen Duncombe, an accomplished artist, of The Center For Artistic Activism explain, that art does not have such a clear goal. The value of art often lies in providing new ways to envision our world and to get a critical perspective. It is not easy to say what art is for or against but good art comprises a surplus of meaning – this means that something moves us emotionally, something alters our perception, something stimulates a feeling. In short, art is an expression that generates affect. 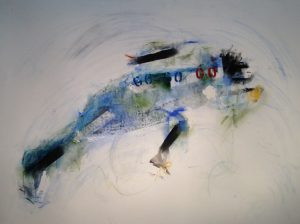 This piece of art mirrors war under the guise of global feminism, religious freedom and education for women. The ‘Running Girl’ painting by Mary Mihelic was honored for the schoolgirls who ran for their lives and escaped from the Boko Haram terrorists in Nigeria when they attacked their school and kidnapped their classmates. Most reports say that 276 girls were kidnapped and 53 were able to flee. A viral hashtag #bringbackourgirls spread quickly with 482,172 Instagram hashtags.

In other words, one can say that affect lead to effect because activists are moved by affective experiences to do physical actions and they result in concrete effects. Thus, activism (which moves the material world) and art (which moves the heart and soul) are complimentary.

Today, with the accessibility of social media, political awareness has never been more in tune. However, the ways in which people protest have been reduced to transient “likes” on Facebook, Instagram, and Twitter. Is social activism a diluted version of activism? Is posting a photo in the name of a cause an adequate action? Can artistic activism change the world?

Slogans like #bringbackourgirls are nonetheless very important. They have shown that such campaigns are able to reach high volumes, that they can exert political pressure, rally supporters and spread consciousness. But is it enough to just “post”, “share”, “like” or “hashtag”? It just takes some seconds and requires practically no personal investment. That is probably the reason why campaigns like #bringbackourgirls are able to disseminate the masses. Furthermore, the act of clicking is an act of solidarity which may put our conscience at ease. However, this reflects an easy social praise and even in its most generous form, it remains social activism for the lazy.

To come back to the Pussy Riot example. Their clip on YouTube has exceeded a few hundred million views and has turned into a global media phenomenon. However, did the Punk Prayer really challenge the social and political boundaries in Russia? I am not so sure that Putin really cared about it.

The same applies to the #bringbackourgirls hashtag which has spread in the aftermath of the abduction. Due to the failure of rescue efforts, it has faded just as quickly as it flourished from Western public consciousness in the months after.

To summarise, public behavior has taken a character of lyrically powerful but often practically empty hashtags, Facebook posts or Instagram illustrations. In this climate, we must scrutinize ourselves how social media is transforming our reactions and whether they are suitable for the international crisis.

2 thoughts on “Is Artistic Activism Changing the World?”