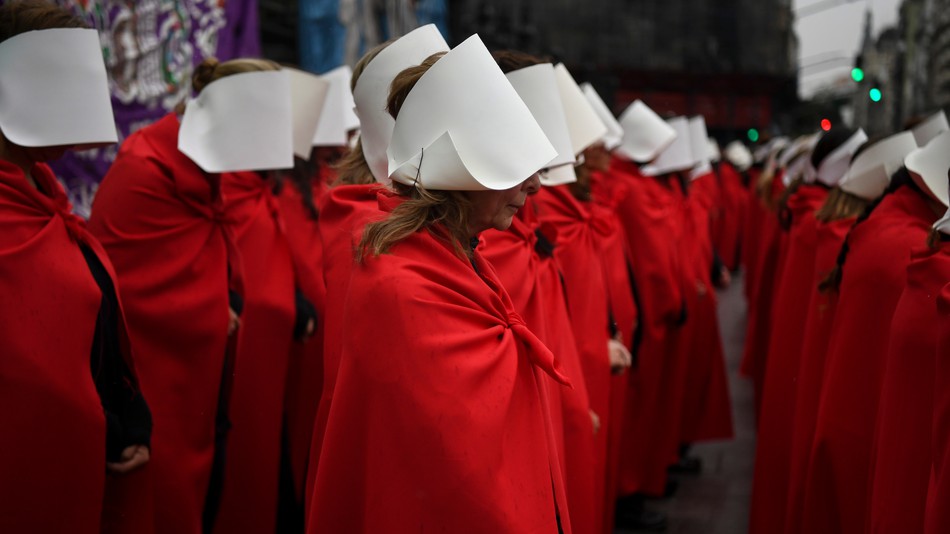 Thomas Poell and José van Dijck (2018), reviewed recent protests and uprisings and pointed out that some scholars, notably, Castells (2012), Bennett and Segerberg (2012, 2013), and Margetts et al. (2016), have proposed that social media user activities are at the heart of a fundamental transformation of activism. Poell and van Dijck mentioned that these scholars perceive social media platforms as enablers of bottom-up types of protest mobilization, organization, and communication.

This is clearly the case regarding organizations, such as Planned Parenthood, Demand Justice, Unite for Justice, and Refuse Fascism, that used major social media platforms (e.g., Twitter and Facebook) to mobilize and communicate when they promoted several demonstrations, such as the Handmaid’s Tale-inspired protests in the US.

Just in the past few days, The Handmaid’s Tale protesters have been observed silently standing outside the Congressional confirmation hearings of Supreme Court nominee US Circuit Judge Brett Kavanaugh.

A vote to confirm Brett Kavanaugh to the Supreme Court, the protesters claim, is a vote against the right to safe, legal abortion; a vote against those who access health care through the Affordable Care Act; and a vote to ignore survivors of sexual violence.

Kavanaugh has been accused of sexual assault by California Professor Christine Blasey Ford. Further, Kavanaugh has demonstrated a lack of respect for women’s rights to control their bodies during his term as a US Circuit Judge (2006-present).

It’s unbelievable that in 2018, and amid the wave of the #MeToo movement, we have to debate whether accusations of sexual assault are a disqualifier for serving on the Supreme Court. (Planned Parenthood Action)

So why are these red robes and white bonnets used to symbolize repressive patriarchy? The answer is that Margaret Atwood’s The Handmaid’s Tale (1985) is the story of a religious revolution that created a theocracy named Gilead, where women were dispossessed of their human rights and forced to bear the children of the society’s elites.

“The handmaid’s costume has been adopted by women in many countries as a symbol of protest about various issues having to do with the requisitioning of women’s bodies by the state.” Margaret Atwood

Although most people join social movements based on personal motivations and goals, it does not necessarily follow that collective action does not revolve around “collective action frames,” which require negotiating common interpretations of collective identities. Instead, collective action is driven by the rapid sharing of personal action frames via social media, which is the case regarding The Handmaid’s Tale-inspired protests by women around the world who wear identical clothing to symbolize their concerns about various social issues.

Regarding communication behaviors with respect to the global women’s rights movement, activists can be observed using these media to communicate messages that aim to achieve or attain a goal (Martín-Barbero in A.Mattoni & E.Treré, 2014). It is important to recognize that social activists have “found new pathways to construct shared meanings and narratives, and to articulate identities in a social process that was fundamentally a highly embodied and emotional experience movement” (Tufte, 2017, p.104). These resources have become crucial tools for social movements; activists use media, such as Facebook and Twitter, to organize demonstrations and “actions that affect individual lifestyle and private behavior” (Della Porta and Diani, 2006, p.2).

In this sense, an important point about media is that it is socially, culturally, and politically situated infrastructure that merges with political subjects’ constitutions.

In sum, since the election of Donald Trump as United States President, literary works, such as Atwood’s, which present dystopian worlds comparable to the current political climate by obvious parallels, contribute to raising citizens’ awareness and are excellent sources of inspiration for protesting against extreme politicians trying to reduce fundamental human rights.

2 thoughts on “The Handmaid’s Tale-Inspired Protests”