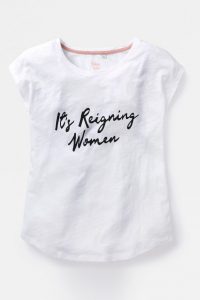 March 8, International Women’s Day, is a special day in the calendar for women worldwide as the status of women across the globe is highlighted and celebrated, analysed and debated. Much progress has been made in some areas, but millions of women worldwide are still far from enjoying the freedoms others take for granted. Campaigns to end inequality,  close the gender gap or to assist disadvantaged women are important tools for the global development agenda.

So this headline and article  – Slogan t-shirts to empower you on International Women’s Day,  published in Marie Claire UK (online)by Penny Goldstone a day before Women’s Day, set me reflecting anew about the development space, representation  and the commodification of poverty /underdevelopment:

The article begins: “These days, the best place to express your feelings isn’t on social media – it’s on your body (no, not a tattoo, although why not?), it’s on a slogan Tee.”

And continues:  “…we’ve rounded up our pick of the most empowering slogan t-shirts from the high street, and even better, for some of those you purchase, donations will be made to charities that support women’s causes, such as the Amplifier Foundation, mothers2mothers, and International Women’s Day 2019 partners Catalyst and WAGGGS.

And yes, there was cute merchandise from some of my favorite brands – Net a Porter Power Tee, (GBP145 -ouch! Not cheap) Gap, DKNY, to name a few. The slogans, such as Power, Woman, and I am enough were thought-provoking. I would definitely wear one.

But it was spoilt for me when I clicked on the link to Pour Les Femmes   – a new pajama line by actresses Robin Wight and designer Karen Fowler  and watched the video below.

“SLEEPWEAR FOR PEOPLE WHO DREAM OF A BETTER WORLD”

Designed to “Change someone’s life while you are in your sleep,” a portion of proceeds of the $150-$200+ women’s nightwear line will go to the NGO “Action Kivu” which supports women, children, and communities of the Congo through vocational training and education, and a few other named charities.

Don’t get me wrong, I don’t object to charitable drives, but tell me that the video ad below for this high-end sleepwear  doesn’t perpetuate

a stereotype of “western superiority” which in the words of Olivia U. Rutazibwa  is “complicit in reproducing, invisibilizing and legitimizing the ills of poverty, conflict, deprivation, diseases, environmental degradation and exploitation.”

Wight and Fowler, who have been close friends for over 20 years invite women ( presumably well-heeled, white, upper-class women)  to purchase their nightwear to generate seed money for Congolese women who are victims of violence.

The two friends, who “love pajamas and lying in bed” – in soft cottons and delicate embroidery” invite us to support “the “endless need” of Congolese women with the  endless resources of “what “we” can do for “them.

“With every purchase you make from Pour Les Femmes, you are directly affecting the life of a woman by giving her work, stability, and hope. Thank you for being a part of their future and allowing them to dream bigger,” the label says, ignoring the irony of this scenario which this conjures up: buyers (presumably white, wealthy, – the “we”), only need to sleep in their upscale, urban western homes to solve  the endless problems of Congolese women.

I felt indignant and uncomfortable as  I watched the video in which the Congolese women who are on the receiving end did not really feature except as a backdrop. Throughout the entire video they have no voice, except to chorus their support for the “help” in the last frame.

To be fair, Wight has been to Congo several times and is emphatic that women’s empowerment is her ultimate end. “We wanted to give them a skill and get them back on their feet so they can take care of their families and feel like a real person again,” she states in an interview in Elle last December about the pajama line. Indeed profits from the sale of this special line go to Action Kivu and other needy African women.

But it’s such a shame that on International Women’s Day stereotypes are being reinforced with the familiar superiority complex from even well-meaning actresses. (and Wight is one of my favourite). When “power to enact change  is placed in the hands of the donor and not in the hands of the community itself,” I can’t but ask myself whether stereotyping and “White Saviour” representation will ever change in the North-South space. 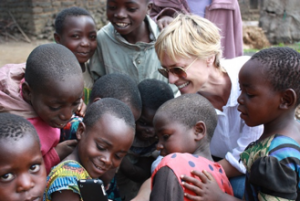