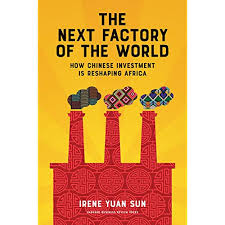 Does the future of Africa lie in industrialization?

“Chinese investment gives rise to a tantalizing possibility: that Africa can industrialize in the coming generation. “

“The fact that China sees Africa not for its poverty but for its potential wealth is a striking departure from the attitude of the West, particularly that of the United States. Despite fifty years of Western aid programs, Africa still has more people living in extreme poverty than any other region in the world. Those who are serious about raising living standards across the continent know that another strategy is needed.” – Irene Yuan Sun

Irene Sun in her book The Next Factory of the World, makes an interesting proposition – that industrialization, specifically large-scale manufacturing in factories, could be the key to Africa’s future development.

Her book, although perhaps best described as an economic analysis proposition, gives very pertinent perspectives on globalization, modernization, and development. In particular, she addresses the Bretton Woods and Washington models for economic development, which although shunned by China, did not hamper its record advance to global economic powerhouse.

In the beginning of the book, Sun describes her childhood in the early 1990’s in China, a country at the time without cars, clingfilm, or the soft drink Sprite. She vividly remembers the first time she sat in a car.

“I am only 30 but I remember a time when China’s car-clogged streets were full of bicycles,” Sun says. “Such has been the rapidity of China’s transformation, sparked by the rise of Factory China…In the quarter of the century, since I first sat in that car, China has gone from producing 2 percent of global manufacturing output to 25 percent.”

Sun also adds that over that time China’s GDP grew 30-fold and 750 million people were lifted out of poverty – “the most ever achieved in a single period in the history of the world.”

She cites some of her favorite outward signs of  “real” development in China – the small everyday occurrences that can delight only those who have known life without them” – such as Sprite and toilet roll in store bathrooms, “and no one thinks it’s special to ride in a car anymore.”

Fast forward several years during which Sun schools in the US, studies at Harvard, then finds herself in Africa, in a remote village in Namibia. One day when she needs to run an errand and asks  her class if anyone will accompany her in her car, they all scramble to go.

“I knew this longing to sit in a car,” she says…”cars and sprite and toilet paper may sound like materialistic ways of defining development but people who have these things tend to forget how much they are markers of modernity to those who don’t…the appearance of such material goods in society, heralds the possibility that people can adopt new selves, new ways of being in the world: as producers and consumers in the modern global economy.” (pg 84)

Her stay in Namibia and encounter with Chinese factory owners leads Sun to subsequently spend years studying Chinese investment in Africa. She the returns and after months of research into Chinese businesses comes to the premise which is the title of her book: that factories (especially Chinese), in Africa, have the potential to repeat and improve the sort of industrialization in China that has made such a dramatic and speedy difference.

Sun points out many similarities between Africa’s challenges and China’s economic development as well as the reason Chinese investors find it “easy” to come to Africa. “(they) believe that Africa is in the same position China itself was a few short decades ago..there are no pilot projects, no NGO’s, no theorizing about paths to development – only the blunt attempt to recreate what China built for itself over the past three decades.”

Ultimately, Sun’s book offers interesting new perspectives about the possibilities of manufacturing and factories in the development of Africa: industrialization (factories) could potentially eliminate unemployment, boost livelihoods and dramatically alter socio-economic norms. It is an interesting addition to the debate on globalization, development, and poverty.