Since its inception in 1988, Comic Relief’s Red Nose Day has been a mainstay in the calendars of most British households.

In theory, Richard Curtis’s original idea of using comedy to highlight issues around extreme poverty seems crass, ill-fitting, even inappropriate and yet over the years it has become one of the biggest fundraising platforms in Britain, raising money for projects both in the UK and overseas. At its peak, Comic Relief raised £108.4 million in 2011 and collectively has raised over £1.3 billion since the late 1980’s. 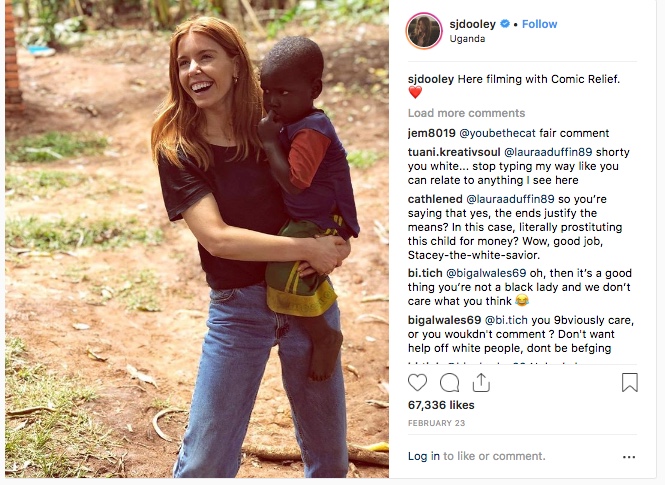 The world does not need any more white saviours. As I've said before, this just perpetuates tired and unhelpful stereotypes. Let's instead promote voices from across the continent of Africa and have serious debate.https://t.co/LySa0BXeyi

Lammy’s main point was that Comic Relief is perpetuating stereotypical images and dynamics by continuing to utilise celebrity trips to African countries where the focus is more on the celebrity than the supposed recipients of Comic Relief funds.

In 2017 Lammy wrote an opinion piece in The Guardian where he said, “Africa may have changed beyond recognition, but over the generations knowledge and attitudes in Britain haven’t… It still blurs the 54 separate, sovereign nations into a single reservoir of poverty, grief and suffering. One billion African people are filtered into just two categories: either corrupt politicians replete with Savile Row suits and Swiss bank accounts, or poverty-stricken mothers swarmed by flies, their childrens’ stomachs swollen by hunger.”

The dependency/‘white saviour’ paradigm is intrinsic to the Comic Relief model. Lammy and those that agree with him feel Comic Relief has a responsibility to ‘do better.’ Lammy further stated in 2017, “Comic Relief’s biennial guilt trip perpetuates these stereotypes and fails to move the debate on in a constructive way… Comic Relief should be helping to establish an image of African people as equals to be respected rather than helpless victims to be pitied. So rather than western celebrities acting as our tour guides to Band Aid Africa, why not let those who live there speak about the continent they know?”

David, is the issue with me being white? (Genuine question) …because if that’s the case, you could always go over there and try raise awareness? Comic relief have raised over 1 billion pounds since they started.
I saw projects that were saving lives with the money. Kids lives. https://t.co/pPgez9OxN8

Of course, the white in ‘white saviour’ isn’t necessarily tied to race just as the South in Global South isn’t necessarily tied to the geographic south. As indicated in his response to Dooley below, the ‘white saviour’ complex Lammy is lamenting stems from a dependency model that shows African countries as unable to help themselves, therefore being totally reliant on external help.

Hi @StaceyDooley. This isn't personal and I don't question your good motives. My problem with British celebrities being flown out by Comic Relief to make these films is that it sends a distorted image of Africa which perpetuates an old idea from the colonial era.

In defence of Dooley, Comic Relief issued a statement insisting, “We are really grateful that Stacey Dooley, an award-winning and internationally acclaimed documentary-maker, agreed to go to Uganda to discover more about projects the British people have funded there and make no apologies for this. She has filmed and reported on challenging issues all over the world, helping to put a much-needed spotlight on issues that affect people’s lives daily. In her film, people working with or supported by Comic Relief projects tell their own stories in their own words. We have previously asked David Lammy if he would like to work with us to make a film in Africa and he has not responded. The offer is still open.”

In 2018, Sport Relief and Comic Relief vowed to make changes to their film style following backlash of an Ed Sheeran trip to Liberia in 2017. Comic Relief chief executive Liz Warner said: “This year, we are putting people at the heart of the films. We haven’t sent celebrities, for the night of TV, to Africa. People are telling their stories in their own voices, and we are using local heroes.” It seems that perhaps in 2019 Comic Relief has reverted back to the Sheeran style film.

Of that Sheeran trip, Afua Hirsch wrote in The Guardian, “It’s the right sentiment, but well-intentioned remarks fail to arouse viewers’ empathy when the video has the opposite effect. By showing starving and sick children at their most vulnerable and exposed, it goes against the idea that their dignity is worth as much as his children’s, and creates an artificial distinction between “us” and “them”. Here we are, the resourceful and benevolent agents of change; and they are the passive others in need of our charity.”

Both Hirsch and Lammy have underlined the pervasive colonial narrative that tends to be present within this paradigm. Hirsch stated, “The colonial perspective – in which we regard the developing world as a place to plunder, while simultaneously congratulating ourselves on our humanitarian concern for its people – has us in an enduring psychosis. This skews our judgment, allowing us to commit these extreme acts of othering, even when – as is clearly the case with these well-intentioned celebrities – we are trying to help.”

Subsequent media coverage of this year’s Red Nose Day is now also blaming Lammy’s comments for the fact that £8 million less was raised this year than in 2017.

Additional controversy of 2019’s Red Nose Day that has been mentioned as an aside to the Lammy/Dooley drama is Comic Relief’s apparent cancellation of a segment on Female Genital Mutilation (FGM) for fear that it too would come across as ‘white saviour’-esque because it involved reality star Dani Dyer. Third Force News reported that Dyer was filmed visiting a project in Sierra Leone and urged viewers to give £10 or £20, adding: “That is girl power. I love that. I need a little bit of this group at home.” They also added that, “Nimco Ali, a campaigner who helped outlaw the practice in Britain, warned Emma Freud, director of Red Nose Day, that the film could backfire.”

Perhaps 2020 will see a new dawn for Comic Relief’s principles and practices, instead of more of the same. However, another Rusty Radiator award is potentially all that’s on the horizon for the foreseeable future.