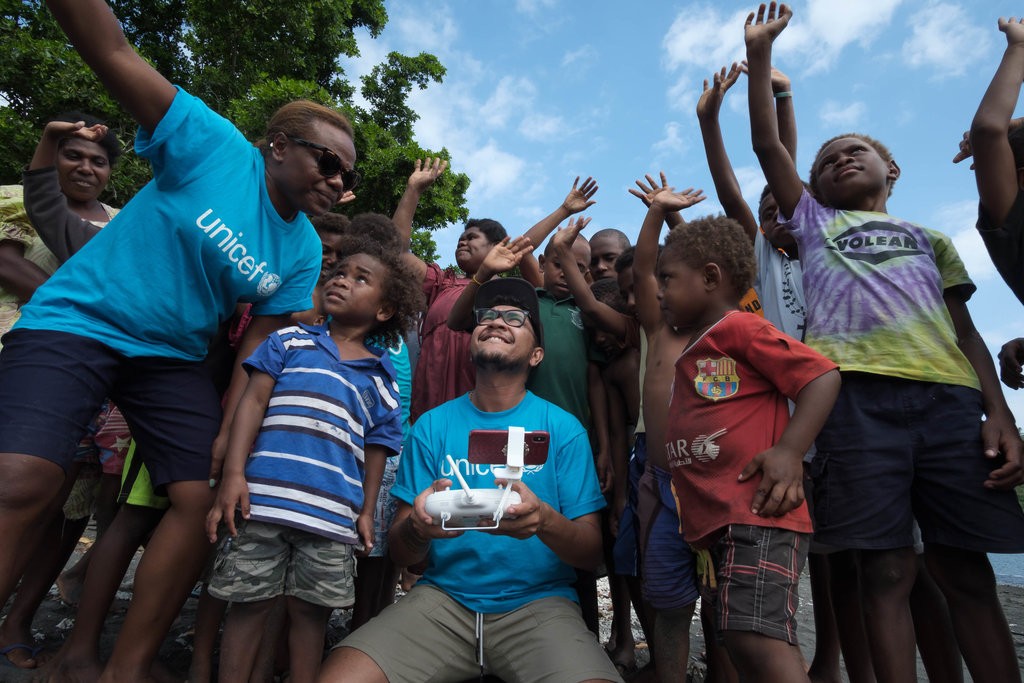 Joseph Hing and Rebecca Olul from UNICEF Pacific demonstrating a drone to children on the island of Epi, Vanuatu. The drone will be used to deliver vaccines to remote areas. Photo credit: Jason Chute/Unicef Pacific

2018 saw a continued uptick in the use of Drone technology within the development and humanitarian landscapes. During that time, Mark Lowcock, United Nations under-secretary-general for humanitarian affairs and emergency relief coordinator (and the Head of the United Nations Office for the Coordination of Humanitarian Affairs), astutely observed, “Already, because of advances in data science and AI and technology … there has been more innovation and change in the humanitarian sector in the last five years than the previous 50.”

How has the sector coped with this rapid onset of change and has it all been plain sailing?

Nick Dowson at the New Internationalist, positioned the various moral and ethical qualms often associated with the use of Unmanned Aerial Vehicles (UAV) or drones in a humanitarian or development context, not least including: “With air space, and personal data, much more heavily regulated in the Global North, trialling drones in crisis zones gives companies a way to test their technology – and look good while doing so.”

The use of drones of course brings with it deep seated connotations related to military operations. In their 2014 academic article, The Rise of the Humanitarian Drone: Giving Content to an Emerging Concept, Kristin Bergtora Sandvik and Kjersti Lohne untangle the meaning behind the term ‘humanitarian drone’ and the Drone’s evolution “from the global battlefield to the humanitarian emergency zone.”

Sandvik went on to develop these concepts further, along with additional academic thinking when she co-edited the 2016 book the The Good Drone.

As documented by Devex in May 2018, Belgium announced an additional €2 million ($2.33 million) to support the World Food Programme’s (WFP) drone and blockchain programs. This joint initiative, originally launched in 2017, deployed drones in humanitarian crises with WFP running a series of workshops across six different countries to better understand how the technology could be used to solve local problems.

Devex went on to point out, “Other aid organizations are increasingly following suit. The International Organization for Migration now uses drones to map displaced populations, Catholic Refugee Services deploys them to track coastal rebuilding, and the United Nations Children’s Fund (UNICEF) is preparing to use them to deliver vaccines in remote areas.”

In the case of UNICEF, the first delivery of vaccines took place in December of 2018 in the South Pacific country of Vanuatu – officially considered the most at risk country in the world according to the 2018 World Risk Report prepared by the United Nations University’s Institute for Environment and Human Security (UNU-EHS). The main reason for this is its location on the edge of the Pacific Ring of Fire making it prone to earthquakes, volcanoes, high tides, and floods, as well as cyclones and drought.

As a country made up of 83 islands, Ni-Vans (people from Vanuatu) constantly have to navigate remoteness, and difficultly in traversing treacherous terrain. These issues, amongst others, have resulted in only 1 in 5 children receiving their full vaccinations. But drones can change this by delivering vaccines to remote areas and ensuring vaccine coverage is not compromised.

A New York Times article on this innovation stated, “Unlike military drones — which fly high and sometimes fire missiles — commercial drones must venture in low, dodge trees, land gently and even return with payloads, such as blood samples. As drones have improved, their potential uses in global health have rapidly increased, and many countries and charitable groups are considering them.”

In February 2019, Devex reported, “donors saw a need to come together to help drones realize their potential for last mile delivery of essential medical supplies.” As a result, seven major donors and international organizations worked to coordinate investments for unmanned aerial systems, or UAS, in global health. Working under the umbrella of the Interagency Supply Chain Group, which brings 16 global agencies together to coordinate work on health supply chains. The UAS coordinating body launched a website to share their learnings around drones for payload delivery and invite other donors to join.

While still somewhat in its infancy, it’s clear that there are obvious advantages in using drones to overcome certain barriers in humanitarian response and development cooperation, such as distance and accessing remote areas. However for all the benefits, there are still many issues that warrant further testing and regulation, especially from those leading the charge.