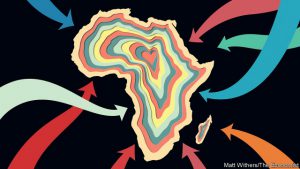 According to a thought piece recently published March 7, 2019 in The Economist,  entitled The New Scramble for Africa, “outside interest” in Africa, it appears, has reached a peak. Here are a few of the reasons why, according to the story:

The article argues that the renewed interest in Africa, described as the “new scramble for Africa “(again, lumping the  continent together)  from former colonial powers and other northern and eastern neighbours,  is “more benign,” and could actually be beneficial, “if handled well, Africans can win.”

“The past decade has seen a big surge of foreign interest in Africa—involving China, India and Russia. If the continent handles this new “scramble” wisely, the main winners will be Africans themselves, “ the preface to the video narration on Youtube says.

But once again, this thinking is a classic representation of Western-centric bias, actually reinforcing, rather than contradicting the colonialist approach to Africa, this article purports to convey. From whose perspective is “Africa” becoming more “important”? The notion of a scramble itself and the audacity of pronouncements such as “if the continent handles this wisely,” comes from deeply embedded imperialistic prejudice.

Two of my previous posts – The Next Factory of the World, a review of Irene Sun’s book which offers a bold solution to Africa’s underdevelopment and How do western media get it so wrong? , which examines media coverage of Ethiopian Airlines flight 302 on March 10 2019, in which 159 people were killed, can be seen as part of the same conversation –

The article goes on to argue that old colonial stereotypes of foreigners wanting to rape and pillage Africa’s mineral and oil wealth, have been replaced by a supposed new interest “in African people.” (whatever that even means?)

The next part of the article outlines the “benefits” of this so-called new interest:

“However, engagement with the outside world has mostly been positive (according to whom?) for Africans. Foreigners build ports, sell insurance and bring mobile-phone technology. Chinese factories hum in Ethiopia and Rwanda. Turkish Airlines flies to more than 50 African cities. Greater openness to trade and investment is one reason why gdp per head south of the Sahara is two-fifths higher than it was in 2000. (Sounder macroeconomic policies and fewer wars also helped.) Africans can benefit when foreigners buy everything from textiles to holidays and digital services.”

But it is the prescriptive tone in which the article sums up how Africans should handle, or respond to this, is outraged and offended me.

“First, voters and activists can insist on transparency. It is heartening that South Africa is investigating the allegedly crooked deals struck under the previous president, Jacob Zuma, but alarming that even worse behaviour in the Democratic Republic of Congo has gone unprobed, and that the terms of Chinese loans to some dangerously indebted African governments are secret.

Second, Africa’s leaders need to think more strategically. Africa may be nearly as populous as China, but it comprises 54 countries, not one. African governments could strike better deals if they showed more unity. No one expects a heterogeneous continent that includes both anarchic battle zones and prosperous democracies to be as integrated as Europe. But it can surely do better than letting China negotiate with each country individually, behind closed doors. The power imbalance between, say, China and Uganda is huge. It could be reduced somewhat with a free-trade area or if African regional blocs clubbed together. After all, the benefits of infrastructure projects spill across borders.

Third, African leaders do not have to choose sides, as they did during the cold war…”

The idea that developing nations, and in this case an entire continent, must follow solutions dictated by outsiders without the inclusive voice of any African is itself a form of neo-colonialism. It’s instructive that the video narration is done by a non-African – further illustrating the “us” and “them” complex.

If the goal of development, or,  a renewed partnership with Africa’s former colonial rulers, is to bring about social and economic transformation, then surely Africans are the best placed to make the decision on what that development should look like. And indeed, it’s Africa 2063 Development Agenda mirrors much of the global development goals such as the SDG’s.

I’m surprised that a reputable publication such as The Economist would publish an article in this form. But it only goes to show that deeply ingrained notions of superiority and neo-colonialist bias, even from within the leading print media.

Does anyone agree about my objection to the tone of this article? Please comment below.

The Scramble for Africa is defined as “the occupation, division, and colonization of African territory by European powers during the period of the New Imperialism, between 1881 and 1914. It is also called the Partition of Africa or the Conquest of Africa by some.” (Wikipedia)

Below a few reactions to the video narration ( Economist Youtube page)

This is propaganda! Western nations are good. China is bad. Criticize your leaders for not be “global” enough. How about Africa practice self determination and stop listening to outsiders.

This “new” scramble is not new, and has been happening for the last 15+ years

Oh yeah, now China, India and Russia are Africa’s biggest problem, but French and British and other European neocolonialism and regime changes are just fine. Not to mention American “humanitarian” interventionism. Remember that Belgians with French and American support removed and killed Patrice Lumumba or the French removal of Thomas Sankara leader of Burkina Faso liberation from colonial rule. Or to mention US support to one of biggest living genocidal war criminal Paul Kagame, and French seizing of mineral reserves in Ruanda. Or US and British support in UN security council for South Africa during apartheid regime. Or the activities of Western corporations in Africa like Rio Tinto, that have horrific consequences for environment and population. Not to mention cheap or slave labor (Nestle cocoa plantations) and literal debt slavery. No one says that Russians, Chinese or Indians are angels but British talking about scramble for Africa is beyond hypocrisy.

See narration of text below.