In the last year farmers have been protesting all over the world. In November 2018 tens of thousands Indian farmers were marching outside the parliament in Delhi to mark the agrarian crisis – it was the fourth farmer’s protest in the past one year. Half of India’s population works on farms even though farming only contributes to 15 % of the country’s GDP. The past years the productivity has declined and now the demonstrators asked for a higher crop price and loan waivers. At least 300,000 farmers have killed themselves since 1995 because of the crop failures in combination with struggles to pay back debts to banks and money lenders.

“Due to social media, there has been an increased awareness about farmers’ issues in Delhi,” says Monami Basu, a Delhi University professor who is also participating in the march.

Not only in India are the farmers unhappy about how much the government pays for their goods. Shepherds in Sardina, Italy, have in the past month been posting on social media how they pour out milk in the streets. A young farmer started the hasttag #iostoconnando (translated to I am with Nando) after he posted a video online spilling liters and liters of milk on the ground in a protest over the fall in prices. Together with the video the viewers could read the common motto “I’d rather dump it than sell it for next to nothing”. The video spread virally, and many other farmers started pouring out the milk and post about it. Last year the price for sheep milk dropped from 0.85 € per liter to 0.60 € per liter and now are the farmers protesting to get the price up to at least 0.70 € per liter. 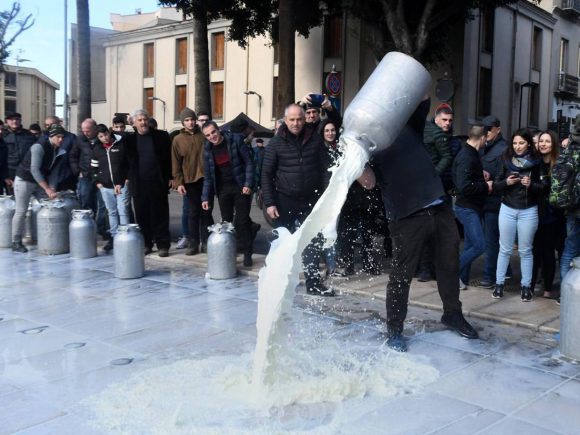 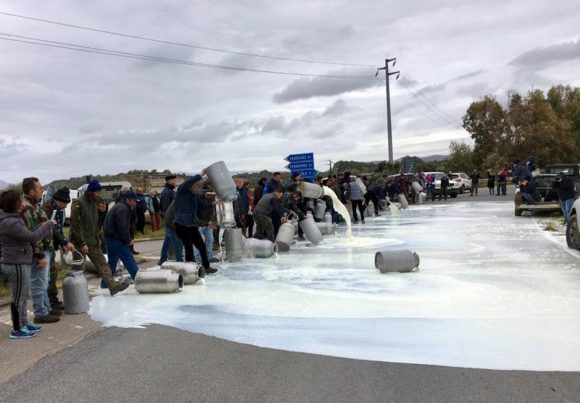 Also, in June 2018 farmers in South Africa were protesting and marching on the streets. For five months the tariff for sugarcanes had been cancelled and 85 000 sugarcane farmers were scared of losing their jobs. The Department of Trade and Industry did not want to re-instate the sugarcane fare. This would resolve in a lower price for importing cheap sugarcanes instead of using the ones produced locally.

Female farmers suffer the most

Oxfam International is right now doing a campaign to highlight the farmers situation. They write:

“Behind the food we buy are millions of people who grow, catch and process it, passing it along a supply chain until it ends up in our homes. But in a global food industry worth trillions of dollars, far too many of the women and men behind our food are being forced into lives of hardship and suffering, working long hours in inhumane conditions for little reward.”

Women are the ones suffering the most from these inhumane working conditions, because they have most of the lowest paid jobs with the least security and are exposed to gender discrimination. About 80 % of the world’s food productions are made by small-scale farms and out of those 43 % are women in developing countries. In some countries, for example in South Asia, women are even the majority. Women get less access to land, loans and machineries and on top of that women are many times also taking care of the domestic activities such as cooking and cleaning. 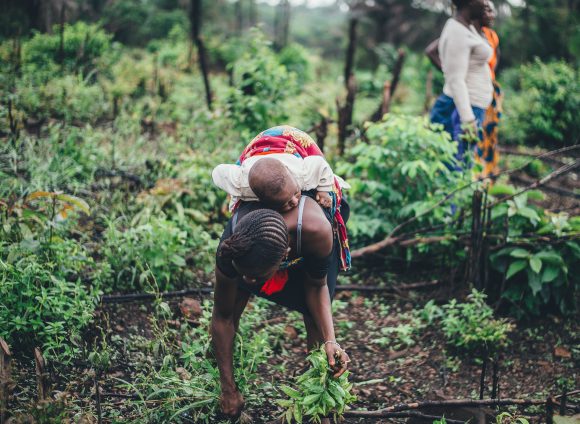 Agriculture is Africa’s biggest economic sector and the producing is getting close to the same level as South America. Around the continent farmers want to boost their harvests and make the labor less exhaustive. Therefore, the tech companies are investing and developing apps for the agriculture industry. According to experts half of Africa’s population will have Internet access by 2025 and that could increase agricultural productivity with 3 billion dollars a year. Some of the apps focuses on helping the farmers to increase productivity, while others help them to connect with other farmers or suppliers without any middle hands. Others help them to access information about market prices, so they won’t be tricked by companies who try to offer them less money for the crops.

“The benefits of using the farmers’ app include the empowerment of women and the marginalized and the production of more and a more diverse array of produce. We can give farmers extension services, market information and a clear open trading platform for the value chain” says Mwila Lando, a young Zambian entrepreneur who designed the app Farmers Basket.

The idea of technology helping farmers in developing countries – especially female small-scale farmers – sounds like a great tool and aid. But there are downsides that still needs to be considered. First of all, in six years half on the population will have access to Internet. That simply means that there still many, many farmers without Internet access. In order to understand the statistics better we can compare Africa’s access to Internet with Europe’s: were already 87 % of all house hold had access to Internet in 2017. Secondly, women are not at all taking part of this technology the same way as men for several reasons. Almost two thirds of the worlds 781 million illiterate adults are women. To be able to use most apps, you must be able to read. Additionally, recent studies show that women are 10 % less likely than men to own a mobile phone and, in some regions, such as South Asia, women are 26 % less likely to own a mobile then men and therefore 70 % less likely to have access to Internet.

In conclusion, even if the apps can be helpful, we still need to keep searching and fighting for a better answer to the gender equalization for the female farmers in the developing countries. If the world could equalize the number of crops produced by women to the same as men produce, the world hunger would decrease by 17 %.

This entry was posted on Tuesday, March 19th, 2019 at 7:37 pm and is filed under Activism, Author: Zandra Nilsson, Gender, Human Rights. You can follow any comments to this entry through the RSS 2.0 feed. You can leave a comment, or trackback from your own site.