Where can you find local, creative feminism in Malmö? The international trend towards party politics becoming more professionalized and less dependent on volunteers also rings true for Sweden. Participation in traditional parties is decreasing. Citizens choose political engagement through protesting, signing petitions and participation in loose or informal networks. This professionalization manifests in how the feminist party Feministiskt Initiativ, Feminist Initiative in English, is often assumed to be an elitist movement. 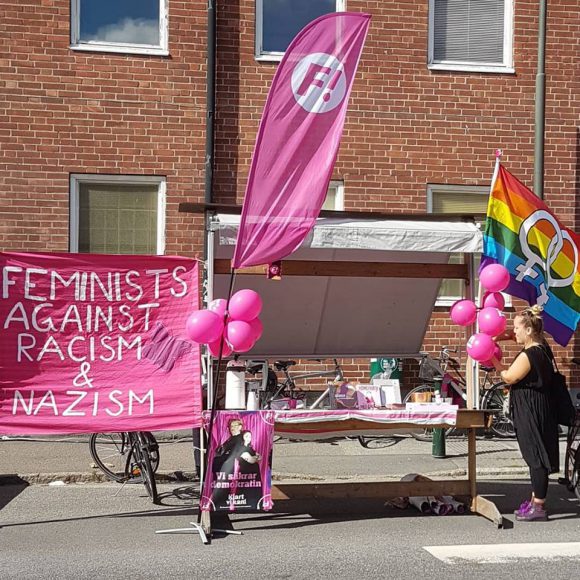 In an earlier post, I compared a demonstration by this party with an extra-parliamentarian demonstration, but alternatives to traditional party politics go beyond these kinds of organizations. The radical left-wing in Sweden is not especially active online and prefer other ways of political communication, partly because of its demand of more straight forward communication.

So where are the feminist movements? To find dynamic, creative reinterpretations of messages, it could be an idea to look at more artistic and event-based feminist movements. It is safe to say that the comic art scene in Malmö is thriving. The city has tried to establish itself as the ”comic capital” of Sweden and is the home of a popular comic art school as well as an assortment of comic publishers and exhibition halls. On International Women’s Day, I participated in a demonstration with established political parties, but the poster for the demonstration is made by Dotterbolaget.

Dotterbolaget is a feminist, separatist comic art network counteracting patriarchal structures, working both as a professional network and as a social arena for artists. It prioritizes community and political statements above profit and has managed to maintain a rather flat organization. The Facebook group for its node in Malmö has 1,3 thousand likes, while the national network has around 770 followers on Twitter and over 2,6 thousand followers on Instagram. The network has gained attention in both TV and newspapers.

Although many hundreds mark themselves as attending their events on Facebook, they only arrange a few physical activities a year, mainly in the form of exhibitions and poetry readings. By looking at their active Instagram account, it is clear that a focus lies with participating in festivals and creating art rather than arranging meet-ups.

Just as the party Feministiskt Initiativ, Dotterbolaget has frequently participated in the yearly feminist festival in Malmö. This festival is organized by a non-party network for feminist organizations in Malmö, ”Malmö’s feministiska nätverk”, with 2,5 likes on their Facebook page. To celebrate International Women’s Day, this network organized another art and film event in Malmö with close to a thousand interested and around 170 people attending. The shifting, loose affiliations in these feminist networks is apparent by how the participants and content of the yearly feminist festival vary significantly with art, lectures, music, and standup being represented in various ways. The Facebook page for the festival has around 6,3 thousand likes and the festival has attracted thousands of visitors over the years. 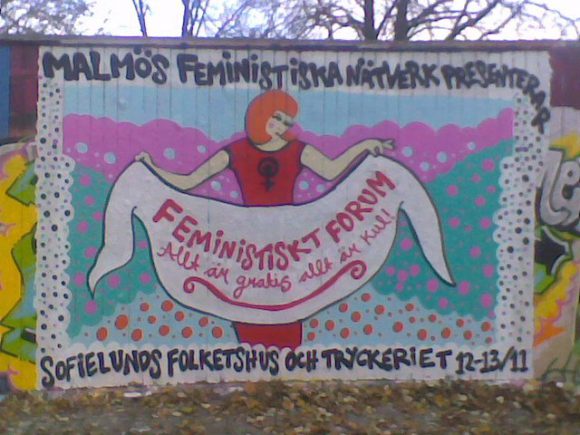 A remarkable feature of these organizations is the connections between them. Regarding reach and activity, the size of the local section of Feminist Initiative on Facebook could be compared to Dotterbolaget and the network for the feminist festival. The groups are clearly interlinked, as the members and supporters frequently like and attend each other’s events and comment on the same posts. To me, this implies a vivid interaction between different kinds of artistic expressions and different approaches to politics, both new and old.

When looking at these feminist efforts, it is important to keep in mind that they do not necessarily dominate the picture of feminism outside of established media. For example, right-wing movements constitute a large part of the alternative movements. The right-wing group ”Stå upp för Sverige” is one of the three most influential political non-party Facebook groups in Sweden with 166 thousand likes. A recent share of an article can illustrate how feminism is interpreted on this site. A news site wrote about the trial of a former leader of Feminist Initiative in an article which on “Stå upp för Sverige” received 1,3 thousand Facebook reactions, 150 shares and 430 comments, most of them obviously very negative. I tried to sketch a comic of my own to describe my feelings about this:

This entry was posted on Wednesday, March 20th, 2019 at 1:11 pm and is filed under Activism, Author: Caroline Ulvros, Gender, Women´s Strike. You can follow any comments to this entry through the RSS 2.0 feed. You can leave a comment, or trackback from your own site.