No love story between hashtags and party platforms?

New social movements, loosely held together and without leaders or obvious strategies, may appear as the total opposite of the political establishment resting in dusty Parliament halls. But can a political party of the old school work together with these new movements or are they forever separated? The force of international hashtag movements can hardly be ignored, but do we witness the emergence of a competing political system? What is politically possible for traditional parties?

While the Swedish feminist party Feministiskt Initiativ is commonly placed to the left on a political scale, the party itself claims to be based on a feminist ideology separated from this traditional categorization. Such an aim doesn’t seem too far from the intentions of new social movements. Still, it could be. Previous election campaigns by Feministiskt Initiativ have been described as relying on traditional narratives of politics when their supporters were looking for new alternatives. They have also been accused of not conveying a clear message about their politics. So are they really challenging traditional politics or not?

Looking at their party platform, some elements stand out among traditional political objectives. They emphasize social movements transgressing national borders as well as international solidarity, but that’s nothing new. In the last election for the European Parliament, they shared global solidarity as a central objective with two other national parties. What would indicate that this solidarity resembles the global justice focus of new social movements? 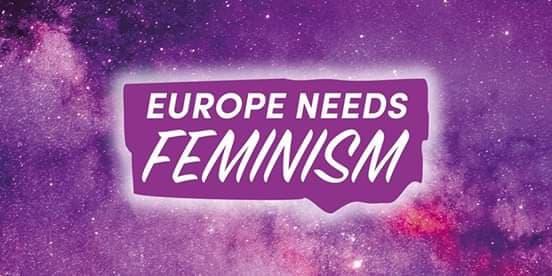 from the campaign for the European Parliament election

One way the party detaches this global solidarity from national decision-making is to point out that their ideology has nothing to do with nations and should not merely be realized inside of institutions. The will to move even further away from traditional party politics can be seen in their campaign for the coming election for the European Parliament. Here, the left-right scale in politics is stated as insufficient for covering power structures and the #metoo-movement is pointed out as an important feminist movement and is connected to their cause.

A similar attitude towards new, global movements is also apparent on the Instagram and Twitter accounts of the local, national, and youth sections of the party. The hashtag #metoo is frequently used. Other hashtags referring to new types of protest are also recurring. For example, #fridaysforfuture and #climatestrike are connected to the ongoing youth strike for the environment. #inteentill is the Swedish translation of #niunamenos, referring to a social movement opposing violence against women. #unheardnomore deals with the empowerment of women in Syria. #timesup is against sexual harassment.

The party does contain a traditional party framework, but it looks like the shape of the frame is somehow shifting. Taken together, the statements about politics and the inclusion of new social movements in political communication may indicate an approach to politics that is not totally conventional. At the very least, it is hard to point out an abyss between the old and the new. As easy it is to disregard this as a political experiment of a small party on the outskirts of the political realm, this party has a seat in the European Parliament and has been close to gaining seats in the national Parliament. Maybe there could be a point to keep an eye on the feminists, in Sweden as well as all over Europe.

This entry was posted on Thursday, March 21st, 2019 at 10:30 am and is filed under Activism, Author: Caroline Ulvros, Gender. You can follow any comments to this entry through the RSS 2.0 feed. You can leave a comment, or trackback from your own site.