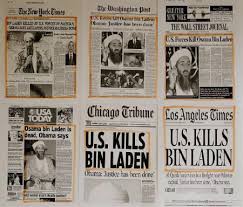 Afghanistan at peace. Can you imagine it? If you are anywhere near my age range (hovering ambiguously around the 30 age bracket), your first understanding of Afghanistan may have been when two towers went crashing to the ground in 2001. Suddenly, Afghanistan, and the prominent figures in it, were thrust to the forefront of my worldly knowledge. Since then, scores of photos from war photographers have become synonymous with a google search of modern-day Afghanistan, while stories of Taliban insurgency and rule have become both the reality for war rooms across the world, and the plot lines of numerous Hollywood films. But imagine for just a minute, headlines void of suicide attacks and threats, and instead, Afghanistan’s Band-e Amir topping the ’10 Places You Must Visit In 2020’ list. 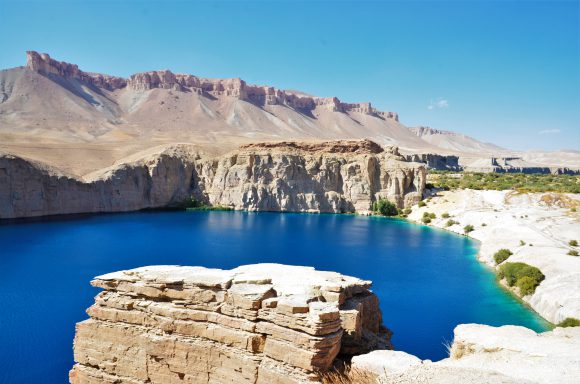 ‘Can I imagine it?’ I ponder while sitting in Afghanistan, scrolling through todays messages on my phone; security alert after security alert. No, I can’t imagine it right now.

But some people can imagine it, and they are making sure we know about it. “We want to see an end to the war” says Farahnaz Forotan, a female journalist and activist for women’s rights in Afghanistan. After 25 years of civil war, peace talks between the United States, Taliban and Afghan government are under way, and never before has the promise of peace has never been so tangible. Splashed across international and local media outlets are the latest Peace Talk updates, while in tea houses, men sit and discuss the potential for change. They have lost family, friends and much of their youth to the ongoing conflict. Some cannot see another way from what they have always known, but many of the younger generation have hope. Yet, amongst the public debate, a key voice is missing; Afghanistan’s women, like Farahnaz. 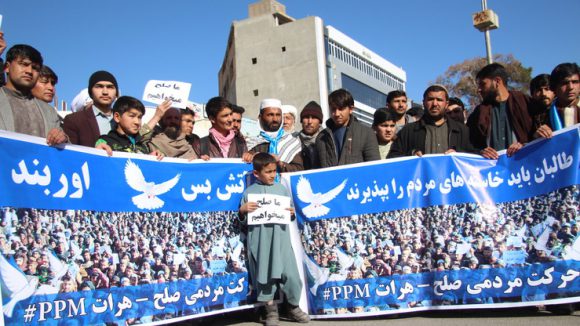 Activists at the People’s Peace Movement urge the Taliban to denounce violence and seek peace.

Activism for peace in Afghanistan is not a new concept. While demonstrations and social movements have been a well-documented, though targeted, part of civil society since the ousting of the Taliban from political power in 2001, much was relegated to geographically specific locations, gender restrictions and ethnic boundaries. Social media activism has allowed for the bridging of these divides, most popularly seen in the People’s Peace Movement (PPM) from Helmand to Kabul in 2018. The movement gained significant traction on social media, given the route which the subsequent march took, through Taliban held areas. Providing updates through a Facebook page with 40,000 subscribers, activists ‘won the hearts and minds’ of a nation tired of war, as more and more people learnt of the movement via social media and joined alongside. While women were physically present at the sit in events, they were discouraged from joining the march to Kabul due to gender restrictions, subsequently rendered silent yet again in the ongoing national peace debate. If women couldn’t show up physically, it was time to take on an online presence. 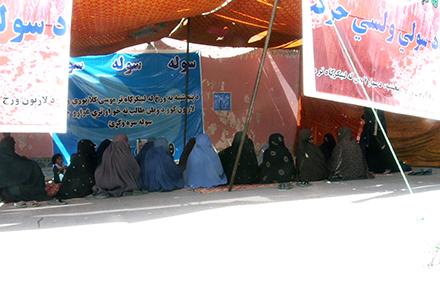 Women in Helmand were only allowed to take part in the sit in, not the ongoing march

“In no other time since I was born, has peace ever been so close. And in no other time have I felt the urge to take part in shaping the future of a country that knew only war for as long as I know myself, the country I call home – Afghanistan” says Farahnaz. “But at what price will this peace come? Will women still have to pay a price? Isn’t once more than enough?” Amongst the ongoing Peace Talks, which have only notably featured two women among a sea of men, the term ‘Red Line’ has been regularly referenced; a point of which the negotiating party is unwilling to compromise. In response, just last week Farahnaz launched #MyRedLine, a social media acitivism movement to to inject the voices and desires of herself and other women into the negotiation process, to represent Afghan womens rights.  Where women can not have a physical presence (40 women were denied visas with no explanation to attend the Peace Talks), Farahnaz is using social media to create an online presence for a collective women’s voice) 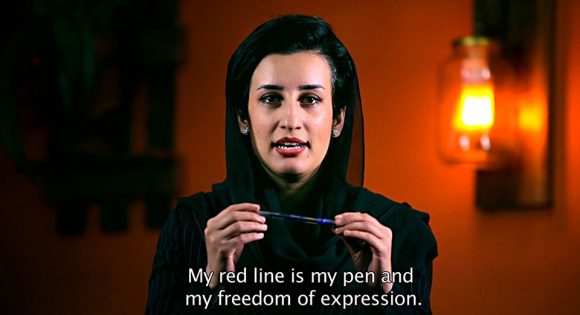 “This is what “MyRedLine” is about, voicing collectively what we are not going to go back to, regardless of the regime that will rule this country. Because I only see Afghanistan peaceful and prosperous if its future is built on social justice for everyone. And I am not alone. In the face of atrocities, we, the people of Afghanistan stand for our rights. We decide on our future. We will remain here to shape the future where all of us can live together. The time to be louder as ever, stronger as ever, united as ever and supported as ever is now”.

Social media activism provides an alternative avenue for those forced out of a physical representation. In Afghanistan, this could radically change the cultural and political landscape, and with activists like Farahnaz representing the voices of those who have been disregarded, the future is an exciting one.

This entry was posted on Thursday, March 21st, 2019 at 11:42 pm and is filed under Activism, Author: Abigail Drane, Gender, Human Rights, Women and ICT. You can follow any comments to this entry through the RSS 2.0 feed. You can leave a comment, or trackback from your own site.