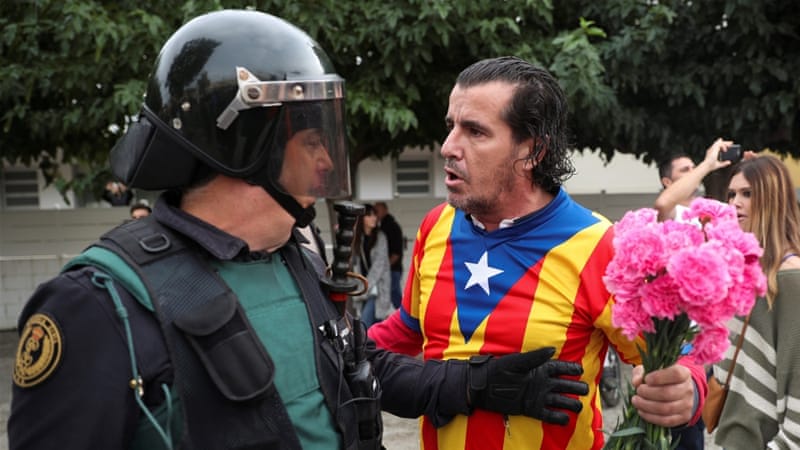 Catalonia is a semi-autonomous region in north-east Spain and has about 7.5 million people. The region is wealthy and has its own language, parliament, flag and anthem. According to sources from the Ministry of Economy, Industry and Competitiveness, Eurostat, and Bank of Spain, Catalonia is home to 16% of Spain’s population and represents 19% of Spain’s GDP. 25.6% of Spain’s exports are from Catalonia and the region attracts 20.7% of foreign investment.

Many reasons contributed to the Catalan controversy. However, key factors involve wealth distribution and the constitutionality of Catalan laws. Catalans believed that their region’s contribution of wealth to other poorer parts of Spain tips the scale especially as taxes are controlled by Madrid, with the widespread feeling that more taxes are taken then given back. Catalonia sends to the rest of Spain more that it should.

Since its early history, Catalonia had many ups and downs. Before the Spanish Civil War in the lates 1930s, Catalonia prospered and had broad autonomy that was short lived as it was quickly suppressed during General Franco’s rule. After Franco’s death, Catalonia enjoyed greater autonomy, powers and prosperity once more under the 1978 constitution and again in the 2006 statute grant. Catalans are now angry because Spain’s Constitutional Court reversed much of this in 2010. The forced changes sabotaged Catalans’ identity. Spain’s court struck 14 articles of Catalonia’s 223 and curtailed 27 others. Among other things that have been struck is the placement of Catalan language above Spanish in the region and the legal effect of any interpretation of Catalonia’s national aspect. Add to that the financial crisis of 2008 during which Catalans resented the Spanish public spending cuts which fuelled local separatism. A referendum was held on 1 October 2017 but was declared illegal by Spain’s Constitutional Court. Turnout was only 43% of which about 90% backed independence.

Many Catalans took to social media claiming violence was being used by security officials to deter them from exercising their opinion. Posts were published on social media showing police striking a number of civilians. Abroad, a number of high-profile politicians commented on the situation via Twitter. Jeremy Corbyn, the leader of Britain’s Labour Party criticised authorities for allowing “shocking” acts of violence to take place.

Police violence against citizens in #Catalonia is shocking. The Spanish government must act to end it now.

I am concerned about situation. I call for political dialogue, rule of law and peaceful solutions. #CatalanReferandum #Spain

Similarly, Charles Michel, Belgium’s prime minister, also spoke out against the use of force by Spanish police. He called on both parties to resolve their political differences through non-violent means.

Violence can never be the answer! We condemn all forms of violence and reaffirm our call for political dialogue #CatalanReferendum #Spain

One of the real heroes of the referendum was undoubtedly social media. According to Emeka Forbes (22 October 2017), technology powered the Catalan referendum, from social media, to peer to peer encrypted messaging applications despite the challenge faced when sites were blocked by the Spanish Government. In the end, referendum organisers decided to make use of a semi-open source, peer-to-peer messaging application called Telegram which allowed citizens to input their details and find their local polling station without having to rely on the official referendum website which could be blocked at any point. With polling stations facing shaky internet connections and struggling to keep the cogs turning, another peer to peer messaging app, FireChat was used and it allowed users to message each other without any active internet connection. Instead, it used short range wifi and Bluetooth signals to create an active connection to nearby devices within 200ft. People had nobody to turn to but the rest of the world via live streaming apps like Periscope and Facebook live.

Eventually, the vote was about the people, and technology helped those who were oppressed to stand up and make their voices heard.