“Algeria wants change” has been resonating in Didouche Mourad Avenue and Audin Square, in downtown Algiers, for the past two weeks. To ignite this wave of social unrest that spreaded through the country has been the announcement of Algeria’s ruling party, National Front of Liberation (FNL) to candidate for his fifth term current President Abdellaziz Bouteflika.

The 81-year-old president has ruled the country since 1999 and seeks a new term in the April 18 elections, despite rarely being seen in public during his entire fourth term after a 2013 stroke left him largely infirm.

Mouwatana (lit. Citizens’ Democracy) is the main grassroot movement that has organised and backed the unleashes of protests, using its Facebook page as the main channel to outreach and mobilise supporters. Their call was not unheard, and hundreds of students responded to social media, staging protests on February 26th in several university cities across Algeria. “We are here today to make a change,” one student protester named Amina told AP, “to change things because we are living in a really rotten situation. We are against the fifth term and we have to act hand-in-hand to change things in this country.”

Social media staging the protests in and across countries

The upcoming presidential election has been a catalyst for this popular discontent and the current mobilization sends a clear message: enough is enough.

In the past decades the government successfully weathered the wave of protests that toppled leaders elsewhere in the region through generous state subsidies and the reiteration of  memories of the 1990s bloody civil war. Yet, today, the nizam, the regime, faces difficulties in dissuading people from taking their grievances to the street.

Despite rarely Algeria has reached foreign press, protests are not a novelty in the country, rather characterised by a fragmented society and engaged activism. As today, Moutawa has emerged as the largest and public oppositional movement in Algeria; yet, a diverse array of social actors have been regularly using social media (e.g. Twitter, Youtube) to denounce the status quo and the widespread feeling of hogra, a word used in North Africa to express the mix of anger and humiliation derived by the exposure to social injustices. 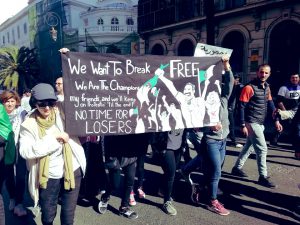 All these forms of activism have joined a common purpose and contributed spontaneously to a form of protests that share widely a rejection of participation to formal politics. In fact, political parties, linked to the regime or to opposition forces, are discredited because of their fragmentation, their incoherent discourses and their participation in clientelist networks closely tied to the regime itself. To benefit from the political disaffection, grassroots movements have grown larger and they have experience a large mobilization on internet, expanding already existing forms of organization in universities and even among football fans. Activist networks that have been mobilized for several decades, even during the civil war of the 1990s, are finally seeing concretised the fruits of their relentless actions to keep criticism alive in the public space, also thanks to the Web that has broke “the wall of fear” that have hold the opposition for a long time.

In Algeria, as elsewhere, discontent aired online translated into activism in the streets, making social media both the reason and the mean for action to concretise.

As Brahim Oumansour, a Paris-based researcher at the Institute of International and Strategic Relations (IRIS) affirmed, “The Internet has allowed Algerian youth to see what is happening in other countries culturally, economically, politically. All this serves to amplify the anger, disappointment and frustration of not reaching the achievements of other countries”.

Indeed the protests had an international outlook. In a show of solidarity, thousands of flag-waving protesters rallied in Paris, Montreal and New York City, along with compatriots living in their home-country. Social platforms have been used to create a unified community that, despite borders, echoes unanimously disaffection for a corrupt political elite that mobilised the unrest in the very first place.  This is well reflected in the mobilisation efforts of Moutawana, which in its Facebook page, organises events and details all the information necessary to join protests in front of Algerian embassies, around the globe.

“I stand here in solidarity with my fellow countrymen and women who, throughout our history, have stood up against injustice and have risked their lives for a better Algeria,” said Sophia Laila Agag in Manhattan, as reported by Al Jazeera . “We need an improved democracy that guarantees jobs, access to healthcare and education. If Bouteflika gets a fifth term, this will prevent Algerians [from getting] their freedom.”

Moustafa, a 56-year-old security guard who was born in France, said he joined the Paris rally because “the protest is against the political mafia that controls the country … Those in power have become rich at the expense of ordinary people”.

On the backstage: perpetuating socio-economic inequalities

These recent protests go well beyond Bouteflika’s bid for a fifth term, but they are rather at the crossroads of long-term discontent resulting from structural injustice and economic crisis to which the country is exposed to.

In fact, the April elections have appeared to the eyes of Algerians as a form of political farce, a mise-en-scene, that distorts democratic processes, increasing civic anxiety around an elite unable to ameliorate socio-economic hardships experienced on a daily basis. From this perspective, while the discourse of protesters has targeted the Bouteflikas (Abdelaziz and his brother, Saïd), it is also questions the broader system of domination that includes Algeria’s military and civilian elites, the so-called Le Pouvoir, in its functioning as a shadow hegemonic force in the country.

The elite is corrupted and not exempted from scandals, fuelling further the disaffection of its citizens vexed by the brunt of the country’s difficult economic conditions. The sharp fall of revenues, less than $80 billion of foreign currency reserves, in this oil-dependent country has impeded the investments in public funds and subsidies, a measure that for years has been used by Bouteflika to buy civil peace since coming into power 20 years ago.

As today, Algeria counts 70% of its 42 million population being the age of 30, 30% of which are currently unemployed and with no future prospects. All born in the late 1980s or 1990s, they have been living under this ruling system their entire life, without any option of choosing a truly representative class that could voice their needs.

Building from the ashes of civil war and solidifying year by year, Bouteflika’s powergrip has reached a testing phase: it is the youth who just know this reality that challenges the promise with which it have been raised, where any rebellion would lead to a new form of fitna, chaos.

The Arab Spring teaches us that these movements can be destructive or vain, they can lead to transformative positive change, nothingness or civil war.

Yet, one must look at what has already happened: Algerians are in the streets, chanting peacefully, expressing their rejection of a system of domination that has nothing to offer but a state of impasse and bureaucratic contempt.

Algeria under Bouteflika is certainly less physically violent than Egypt under Sisi or Syria under Bashar Al Assad, yet the symbolic violence and socio-economic abuses are equally suffocating its society.

All these forces have shaped an Algerian society that now, in Algeria as abroad, is now rising up against the status quo. Together they recreate the Algerian people as a class, as the key actor in an ongoing struggle against domination and injustice, that opposes in its modus operandi to Le Pouvoir itself. The manifestations are peaceful and civilized, politically conscious and responsible. None can tell how the future president is going to look like, what is certain is that Bouteflika, the president, is dead and the Algerian people has shown itself to be alive and thriving. The rest of the story will be determined by those who are currently fighting for dignity in the streets.