Since the 2010-2011 Tunisian uprisings, much has been said about the determinant role of the Internet and social media.  Lina Ben Mhenni, the young Tunisian women blogger and social rights activist, has denounced the violence of Ben Ali’s authoritarian regime and confronted police impunity with her sick body, her extraordinary courage, her fierce independence and perseverance. So, who is the real protagonist,  the activist or technology?

With the advent of Information and communication technologies (ICT), the Internet and social networks,  one of the big challenges of today’s News Media Industry is to identify a winning business model as the two factors, Content and Distribution, which were once the basis of success – in terms of audiences and profitability- are no longer sufficient. The major difficulties faced by media organisations, both public and private, are mostly related to the digital evolution which has had a radical impact on the media value chain and the interaction between producer and consumer as these roles are somewhat reversed. Think about citisen journalism, for instance. Furthermore,  taking into account the globalisation’s dimension, the picture gets more blurred due to trade liberalisations, the fast speed of  ICT innovations, time and cost reductions of media productions, and more homogenous cultures[1].

In the Arab Region, and in particular, after the Arab Spring,  spotlights have been turned on the development of the media sector as independent media companies were rebounded from censorship. Prior to 2011, heavy regulation of the media was common and the shutting down of specific television channels or media outlets were frequent. Private participation was scarce and foreign ownership was constrained severely.

Having  Tunisian origins myself, born, raised, and having started my professional career as a journalist in the capital Tunis,  I have to admit that determining to what extent ICT and the freedom of expression have changed the landscape of media in this country, is not an easy task. Nonetheless, a  few weeks ago I had the opportunity to travel to Tunis in order to provide a training seminar on strategic management and news marketing for a local media company.  Relating to the context of this post, I would like to briefly share my personal notes about this experience. 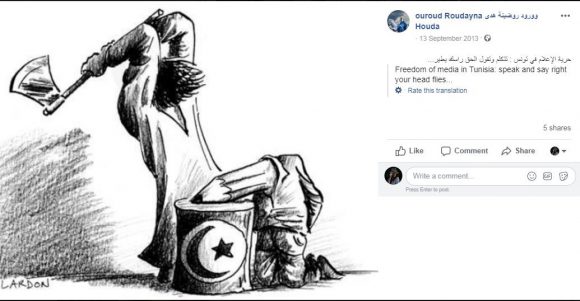 Without citing names to not advertise for or offend anyone, the training seminar was a success in terms of participation and activities’ performance during the sessions. However, I guess it would be hard to see positive results in the near future. Challenges, as in most emerging media markets, are not, as most commonly thought,  about how to use ICT to produce contents and to manage productions. They are more about restructuring and reconsidering the whole environment where these technologies are applied, with its political, cultural and digital practices.  Because, for instance, if the media company has a poor or a negative reputation this will result in disinterest from the audience in spite of the use of the most innovative technologies.  Which is the case of public media organisations who are struggling to regain the trust of audiences since they were known, before 2011,  as propaganda instruments of the oppressive government. Other obstacles have roots in the media sector’s regularisations, the deontology of journalism and digital copyright laws.

Turning back to Italy and to my professional routines, I was convinced that ICT and information in Tunisia do not have a smooth and a harmonious path towards development goals until I read the news about Lina’s death.

Reflecting on her experience provided me with a completely different perspective.

Lina Ben Mhenni started her blog, A Tunisian Girl,  in 2007 when control and monitoring of the Internet were so pervasive and Tunisian Internet users were serving as guinea pigs for the products of the global censorship and surveillance industry.[2]

I would never forget our meeting in June 2014, during the ceremony of Ischia International Journalism Award in Italy. She was the prize-winner for the category of web news and social networks. We discussed a lot about her activity as a blogger.

Her blog was at first more of a diary than an activist site. It was in 2008 that she began to denounce the media and internet censorship imposed by the dictatorship of President Ben Ali. Her Internet connection was cut out more than once. Then, on December 17, 2010, Mohamed Bouazizi, a 26-year-old unemployed man, set himself on fire in Sidi Bouzid. It was the trigger for the revolution of the Tunisian people and that of cyber-activists like her. She has been to all the demonstrations denouncing the repression and documenting police violence against protesters in several regions while Ben Ali’s regime sought to impose a news media blackout. As a result, the political police stole her computers, her cameras, and her external drive. Her father has received dozens of phone calls from his friends telling him that his daughter is crazy. But it was thanks to his support, Lina tells,  that she did not bow to insults, death and rape threats.

On the other hand, several foreign media outlets that could not enter the country were able to report on the violence because of her work. She provided them, through her blog and socials, with rare glimpses of the turmoil in the streets and insights into the mood of the people. Lina has gained international recognition for her bravery and persistence.

After 2011, Lina was fighting a double battle, one against political parties who want to take advantage of the situation of public agitation and disorder to achieve their own objectives which are far distant from the common interests of citisens, and the other against male fundamentalists and fanatics who want to oppress women and reject their rights.

Her other long battle was against lupus, a chronic systemic autoimmune disease she was diagnosed with in her childhood. It was the cause of her recent death at the age of 36.

Her funeral procession on January 27, 2020, will remain in people’s memories for a long time. Among hundreds of mourners,  both men and women carried her coffin, a rare event in conservative Tunisia, where customarily only men are allowed to perform that duty.

So, who is the real protagonist, the activist or technology?

Maybe one of the answers is written in Lina’s book  Tunisian Girl: Blogger for an Arab Spring:  “No one is the leader in the cyber-dissidence space. There is no rule, no limit. We are far more efficient this way”.

Mediterranean Region is her home, journalism is her passion, and  strategic communications her profession.  Currently working for the leading Italian news agency ANSA, Nabila has been dedicating her professional career to develop and manage media and communication projects in different countries for national and international companies and organisations in the Euro-Arab Region. Her huge passion for professional challenges, in order to meet ever-changing global development goals, is her motivation's engine to study for the master Communication for Development (ComDev) at Malmö University . Nabila holds a bachelor degree in Information and Communication sciences, a Master in International Relations, an MBA degree,  and a training diploma from Al-Jazeera Media Center.  She is also a member of the National Order of journalists in Italy. View all posts by Nabila Zayati

2 thoughts on “To the memory of Lina Ben Mhenni, the woman who blogged the Jasmine Revolution”